Dr. Keller steps down as Chair of the Department of Diagnostic Radiology 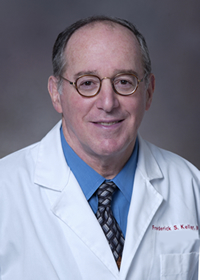 Frederick S. Keller, MD, will step down as Chair of the Department of Diagnostic Radiology, effective January 1, 2011. Dr. Keller has been Chair since 1992.

“While Dr. Keller’s presence as Chair will be missed, I’m pleased that he will remain Director of the Dotter Interventional Institute, and will continue to practice interventional radiology, teach and conduct research,” said Dean Mark Richardson, MD, MBA.

The Department of Diagnostic Radiology has undergone significant changes under Dr. Keller’s leadership and developed a national reputation in clinical service and education. His research will focus on developing new medical devices for use in interventional radiology, and he also plans to continue his international outreach work in the field.

“It has been gratifying to lead changes and to witness the department’s improvement,” said Dr. Keller. “Thanks to the superb efforts of many in our department we have an excellent, stable faculty, a great residency program, financial stability and imaging equipment that is second to none.”

Dr. Keller’s connection to OHSU began when he completed his residency here, during which time he was chief resident and fellow of the American Cancer Society. He joined the faculty as Assistant Professor of Cardiovascular Radiology in 1977, and remained at OHSU until 1983, when he was recruited by the University of Alabama at Birmingham. Dr. Keller returned to Oregon in 1991 and became Cook Professor of Interventional Therapy, a post he still holds. He also holds joint appointments as Professor in the departments of Diagnostic Radiology, Surgery and Medicine.

Dr. Keller has received numerous honors, including the Gold Medal from the Cardiovascular and Interventional Society of Europe in October 2010. Equally important, he has been named by residents of both radiology and internal medicine as outstanding teacher and best radiology discussant. Under Dr. Keller’s leadership, the number of annual imaging examinations has increased four-fold and the department has increased its residency positions by 50 percent, while also developing fellowships in almost all of the subspecialties of Diagnostic Radiology.

In due course, Dean Richardson will announce the interim Chair and the details associated with identifying a permanent leader. He will seek the input of faculty in the department when making these decisions.