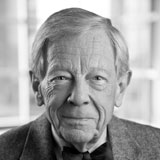 John A. Benson Jr., MD, Professor and Dean Emeritus, School of Medicine, was recently recognized with the 2010 Abraham Flexner Award by the Association of American Medical Colleges (AAMC) at their annual meeting in Washington, DC.

Before an audience of over 4,000, Dr. Benson, president of the American Board of Internal Medicine (ABIM) from 1975-1991, was named a co-recipient of the 2010 Abraham Flexner Award for Distinguished Service to Medical Education, for his “extraordinary contributions to the board certification process, medical education, and academic medicine.” Harry R. Kimball, MD, ABIM president from 1991-2003, shared this honor.

“Sharing the AAMC's 2010 Flexner Award for Distinguished Service to Medical Education with my successor at the ABIM was extraordinary recognition, particularly as I reflect on the previous awardees,” said Dr. Benson. “My long, happy career at OHSU grounded me in teaching, for which it deserves credit too and for which I remain very grateful.”

“We owe a debt of gratitude to John and all he has contributed to medicine,” said Dean Mark Richardson, MD, MBA. “His groundbreaking work in gastroenterology and leadership at OHSU and the ABIM has transformed medicine here and across the globe.”

Numerous honors have been awarded to Dr. Benson over the years, including the John Phillips Memorial Award for Outstanding Work in Clinical Medicine, the Howard P. Lewis Distinguished Teaching Award, and the Allan J. Hill Clinical Teaching Award.  He is a member of the prestigious Institute of Medicine.

Dr. Benson has published over 100 peer-reviewed articles, book chapters, editorials, and book reviews. His many leadership positions include serving as the first president of the American Board of Internal Medicine for 16 years, as well as president of the American Gastroenterological Association. He is currently a professor of Gastroenterology-Hepatology at the University of Nebraska Medical Center College of Medicine.

Dr. Benson received his medical degree from Harvard Medical School, and completed his residency and fellowship at the Peter Bent Brigham and Massachusetts General Hospitals in Boston, and the Mayo Clinic in Rochester, Minn.