This month's featured paper is from the Proceedings of the National Academy of Sciences, and is titled “Kinetics of G-protein-coupled receptor endosomal trafficking pathways revealed by single quantum dots.” The research was conducted by an investigative collaboration that included Tania Q. Vu, PhD, Assistant Professor, and Katye M. Fichter, PhD, postdoctoral researcher from the Department of Biomedical Engineering and colleagues from The Rockefeller University, Marc Flajolet, PhD, and Paul Greengard, PhD.

G-protein-coupled receptors (GPCRs) are the largest protein superfamily in the human genome; they comprise 30 percent of current drug targets and regulate diverse cellular signaling responses.  Previous studies have linked many GPCR neurotransmitter receptors - especially serotonin and dopamine to psychiatric disease, and as such, they are major targets of drug development.

The role of endosomal trafficking in GPCR signaling regulation remains difficult to study due to the inability to distinguish among many individual receptors, simultaneously trafficking within multiple endosomal pathways. Previous research has been limited to observing bulk measurements of hundreds of proteins at a time. Because receptor internalization and recycling are made of the simultaneous kinetics of many individual receptor trafficking events, it is complicated. Without proper technology to access molecular-level phenomena, researchers have been left with an incomplete picture of the mechanisms underlying receptor regulation. 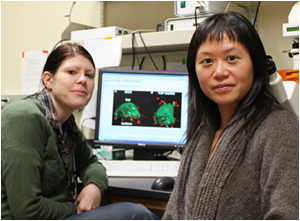 Research in this paper demonstrates that it is possible to tag single, or small groups of receptor proteins inside cells using nanocrystal quantum dots. Tagging individual receptors offers a more complete picture of the percentage of receptor molecules on the cellular membrane that are capable of transducing extracellular chemical signals (neurotransmitters, for example). Furthermore, scientists can look at the recycling pathways responsible for carrying internalized receptors back to the cellular membrane. Using quantum dots to do this, researchers found that the serotonin receptor subtype 1A, a target of many anti-anxiety medications, uses two different recycling pathways simultaneously – a fast recycling pathway and a short recycling pathway. These results demonstrate how complex the internal machinery of the cell is in receptor recycling and ultimately signal regulation.

Looking forward, single-molecule imaging of endosomal trafficking will significantly impact the understanding of cellular signaling and provide powerful tools to elucidate the actions of GPCR-targeted therapeutics.  “We are very interested in investigating the effect of anti-depressant and anti-anxiety therapeutics on the regulation of neurotransmitter receptors such as serotonin receptors,” said Dr. Vu. “Using the quantum dots to investigate the affect of these therapeutics on the regulation of serotonin receptors will allow for the development of better therapeutics for affective disorders.”  Read this paper at pnas.org

The School of Medicine newsletter spotlights a recently published faculty research paper in each issue. The goals are to highlight the great research happening at OHSU and to share this information across departments, institutes and disciplines. The monthly paper summary is selected by Associate Dean for Basic Science Mary Stenzel-Poore, PhD, and reviewed by Dean Mark Richardson, MD, MBA, and Vice President/Senior Associate Dean for Research Dan Dorsa, PhD.

Quantum dot-probe technology was developed by Dr. Vu in collaboration with Drs. Greengard, Flajolet, and Fichter. The probe consists of small, intensely fluorescent nanocrystals called “quantum dots,” which enables the team to visualize and count single or small numbers of serotonin receptors as they move from the cell membrane of a neuron into the neuron and back out again.

With this tool, they can visualize the receptors in the cells via microscopy, and build a 3-D image of the cell showing the position of each receptor in relation to the plasma membrane.  Using this 3-D image, they can classify each quantum dot as ‘inside’ or ‘on the membrane’ of cells, which allows them to track the internalization of the receptors.

Putting this technology into action, Dr. Vu and colleagues plan to use the probe to learn more about how serotonin receptors interact with a protein called p11. Dr. Greengard’s lab at Rockefeller University has recently linked the down-regulation of this protein to mouse models of depression and suicide victims. His research shows that regulation of p11 plays a large role in the membrane availability of 5-HT1B, but the molecular mechanisms regulating that function are still mysterious. “We will use our newly developed quantum dot technology to investigate the recycling pathways and kinetics of these 5-HT1B receptors in cells that have down-regulated p11 to help understand the molecular basis of depression phenotypes,” said Dr. Vu. “Success could not only allow for the development of better drugs for patients, but also shed light on the neurochemical basis for the disease.”