Building the first blocks of a career in science 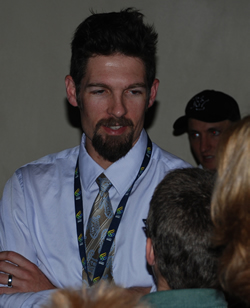 If you want children to think about the role of red and white blood cells in the body, start by asking them to create an autonomous robot to sort red and white LEGO blocks.

This was the call to action behind the 2010-2011 First LEGO League (FLL) challenge. It inspired faculty and staff from the OHSU Department of Biomedical Engineering to help children from local FLL teams develop their projects for the annual tournament. FLL is a national program that introduces students between ages 9 and 14 to real-world engineering challenges by building LEGO-based robots to complete tasks on a thematic playing surface.

BME faculty and staff were involved in an open house at the West Campus to educate local FLL teams about the work of a biomedical engineering lab. They also organized a departmental presentation in the OHSU Auditorium, which attracted over 300 people to hear from experts in a range of backgrounds, including cancer research, prosthetics, neuroscience, nanotechnology, tissue engineering, cellular engineering and drug development.

The department also hosted an “AskOHSU” line and mailbox, where local team members could access help with project questions such as, “Is there a heart balloon that inflates on its own and detects when the heart plaque builds up, and, if so, what size is it?”

“I was surprised and amazed at the range of subjects the team members were studying,” said Dr. Hayes. “They were delving into all sorts of subjects, from cancer and how you can target malignant growths to ways of improving the performance of prosthetic devices. About 30 BME faculty and staff were involved in total, and it was a great experience for all of us.”

Almost 400 teams registered in the Oregon region, which concludeded its 2010-2011 local tournament in mid-January. Click here to read about two of the winning teams from Wilsonville, Ore..