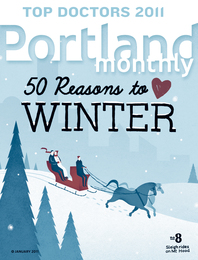 Counting the physicians who are alumni, 53 percent of the 292 physicians listed have some affiliation with OHSU. The OHSU School of Medicine’s MD and Graduate Medical Education programs provide local physicians the education to be able to provide outstanding care to Oregonians and those in the region. One-third of all licensed physicians in Oregon received some or all of their education at OHSU.

“We’re proud to have so many of our physicians recognized by their colleagues, but this is about more than an annual survey,” said Dean Mark Richardson, MD, MBA. “We’re equally supportive of the outstanding efforts of all our faculty members to support our missions of education, clinical care, research and outreach.”

This year’s list of was created from a survey of 5,501 licensed physicians in the tri-county area and southwestern Washington. For the first time, Portland Monthly partnered with Castle Connolly Medical Ltd., publisher of America’s Top Doctors and America’s Top Doctors for Cancer, to distribute and analyze the survey results. Physicians featured in the Top Doctors 2011 guide may also be included in one of Castle Connolly’s nationally-distributed publications.

Licensed doctors were invited to nominate up to 25 colleagues in the region in 59 specialties. The physicians with the most nominations are included in the guide (physicians could not nominate themselves). Certain specialties – such as Emergency Medicine and Trauma Surgery – are omitted because patients don’t typically have an option to choose their own physicians in these fields. The survey was different this year in that it only polled physicians; in previous years, nurses also participated.