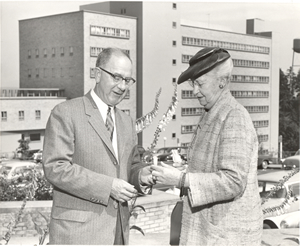 After her husband's tragic death, Dr. Estella Ford Warner forged a distinguished career in pediatrics and public health. Her development of maternal and child health services in Oregon earned national attention. She was recruited for the U.S. Public Health Service, becoming the first woman to serve as a commissioned officer. Dr. Warner directed health programs in Asia, the Middle East, and the Caribbean, as well as the United States, attaining the ranks of medical director and assistant surgeon general.  After her retirement in 1956, she continued to work internationally as a consultant.

Though her career took her far afield, Warner maintained a connection to Oregon. In 1959, she was selected from a group of distinguished Oregon college and university graduates to take part in the state Centennial Lecture series. Her visit brought her back to her alma mater, where she was photographed with Dr. David W.E. Baird, then Dean of the School of Medicine.

A 1959 newspaper account credits Warner's professional success to the fact that she never remarried. A colleague's more discerning tribute celebrated her commitment to innovation, and ability to inspire shared purpose in those around her. In the 1930s, Dr. Warner was asked her advice for young women considering studying medicine. She urged them, "by all means to study medicine – as a profession it offers tremendous satisfaction."