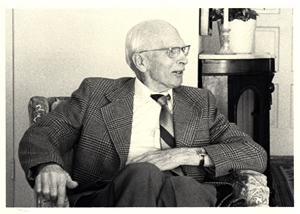 Much is known about his landmark invention: a prosthetic heart valve, developed with Dr. Albert Starr, which saved the lives of thousands of patients afflicted with lethal cardiac valve scarring. But less is known about the man – M. Lowell Edwards – whose work spanned industries and whose name lives on in an endowed position in the Department of Medicine.

Richard Mullins, MD, Professor, Department of Surgery, is pursuing a project on innovation in clinical research. As an academic surgeon, his historical studies have led him to the work of Starr and Edwards. "Lowell Edwards was first and foremost an inventor," said Dr. Mullins. "He spent most of his adult life working in industry. It was after he 'retired' that he became interested in medical research." Edwards was a man of many talents. "He had the entrepreneurial knowledge and skill to use the Starr-Edwards valves to form the basis for a company that was enormously influential in the business world."

A native Oregonian, Edwards attended Oregon State University and had numerous inventions to his name by the time he met Starr in the late 1950s. Edwards had made a name for himself during WWII when Boeing Airline Company adopted his centrifugal fuel pump, which solved the problem of reliably pumping fuel at high altitudes. At the time of his death in 1982, Edwards had 63 patents.

Edwards' son, Miles J. Edwards, was a physician and served as Chief of the Division of Pulmonary and Critical Care Medicine from 1967 to 1983. He helped establish the endowment in his father's name, the M. Lowell Edwards Chair of Research in Clinical Cardiology. The position is now held by Kent Thornburg, PhD, Professor, Department of Medicine and Director, Heart Research Center.

"Miles was also a terrific teacher," said Dr. Thornburg. "Maybe his engineering upbringing helped him to think about things in a simple way, because respiratory physiology is one of the toughest things to teach."

Dr. Thornburg remembers how "Miles would reminisce about his father. He'd talk about what an interesting guy he was, and his inventive mind." Dr. Mullins calls the senior Edwards the "father of biomedical engineering." Edwards established in 1961 Edwards Laboratories Inc., and is renowned among many founders of medical technology companies today. Dr. Thornburg works closely with engineers at OHSU to study fetal physiology. "We have been making miniature models of the heart," said Dr. Thornburg. "Bioengineering at OHSU is alive and well and it's really important for our future."

"Edwards' work teaches us about how science ought to work now," said Dr. Thornburg. "It's very important that we have cross-disciplinary interactions."

The M. Lowell Edwards Foundation was also a founder of the OHSU Center for Ethics in Health Care.