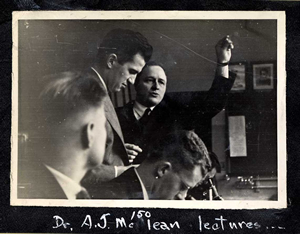 A. J. McLean - a student of Harvey Cushing, father of American neurosurgery and Otfried Foerster, celebrated German neurosurgeon - was Portland's first trained neurosurgeon. At the age of 44, his career was tragically cut short by a car accident on Dec. 7, 1938.

McLean was born in Seattle in 1894. A two-year stint in the military interrupted his education at Reed College, from which he graduated in 1921. He received his M.D. from Johns Hopkins Medical School in 1925 and went on to study neurosurgery with Harvey Cushing at Peter Bent Brigham Hospital as a neurosurgical resident (1925-1929). McLean proved his intellectual worth and penchant for work as Surgical House Officer, Associate in Surgery and Acting Resident in Surgery. He was the Arthur Tracy Cabot Fellow in charge of laboratory research at Harvard Medical School (1926-1927). He then moved to Breslau, Germany, where he studied as a George Gorham Peters Traveling Fellow (1929-1930) with Dr. Otfried Foerster. He then returned to Boston, to serve as a Resident in Surgery.

In 1931, McLean returned to Portland and entered private practice, opening an office in the Medical Arts Building. He brought his fine education and expertise to the faculty of the University of Oregon Medical School (precursor to the OHSU School of Medicine) as clinical instructor in Surgery and Neuropsychiatry. Subsequently, he was assistant professor of pathology and clinical associate in Surgery and Neuropsychiatry. In 1937, he resigned his position but at the behest of his colleagues, returned, continuing as assistant professor of pathology until 1938. At his death, fellow faculty members remembered him as a brilliant physician, saying that his teaching work was beautifully organized, and declared him a magnetic person in the eyes of the medical students. Dr. McLean was also known for his keen diagnostic accuracy and deep concern and care for each of his patients.