Mentoring across generations: Teamwork and the Michael Jackson test 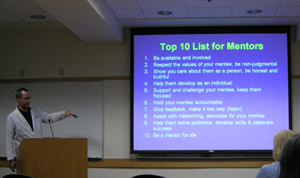 Unsure as to when a colleague or co-worker was born? Try asking them what they know about Michael Jackson.

“Each generation can identify its defining moments and people, and sometimes different generations differ in their view of the same person,” said Joe Gilhooly, MD, Professor, Department of Pediatrics. “To the Baby Boomers, Michael Jackson was a member of the Jackson Five. To the Generation X-ers, he was a unique pop icon.”

Dr. Gilhooly frequently works as one-third of a multi-generational team with Tracy Bumsted, MD, MPH, Assistant Professor, Department of Pediatrics and Jennifer Gilhooly, RN, MS, CPNP, Adjunct Assistant Professor, Department of Pediatrics. All three recently spoke at a Career and Mentoring Seminar series presentation titled “Mentoring Across the Generational Divide.” The seminar was sponsored by the School of Medicine Office of the Dean and the Oregon Clinical & Translational Research Institute (OCTRI).

“There are now four generations in the workforce, each of which has been raised under a different set of values,” said Dr. Gilhooly. “Frequently, those values can come into conflict.”

Workplace generations generally break out into one of four categories: the “Silent” or “Veteran” generation, who grew up around and just after World War II; the Baby Boomers, who were born and grew up through 1960; Generation X, who date from 1961 to 1980; and the Millennials, born since 1980.

The recent focus on health care professionals working to deliver care in teams has highlighted the communications difficulties that can arise when a team is composed of providers from different generations. Generations will also differ on their respect for authority, leadership style, value for diversity, their work ethic, the balance between life-work, and their comfort with technology.

“One of the qualities of being a good mentor is appreciating individual differences and focusing not on value judgments but on respecting values,” said Dr. Bumsted. “In a mentoring relationship, it’s important for those being mentored to clarify what they want out of the mentor-mentee relationship.”

The team’s advice for seasoned faculty facing change includes being open to changes in the learning environment and the use of new learning technologies; respecting the energy, accomplishments and enthusiasm of more recent generations; and assigning tasks that allow younger faculty members to improve their skills. For newer faculty members in the same situation, the team recommends valuing the experience of seasoned faculty members and the institutional memory; creating common ground through flexibility, communication and understanding; and being aware not only of what they are saying but also how they are saying it.

“Research has shown that most effective teams include members of a number of generations,” said Jennifer Gilhooly. “Reaching common ground, however, depends on identifying common values rather that those which divide.”