Dr. Richardson is recipient of the Gabriel F. Tucker Award for 2011 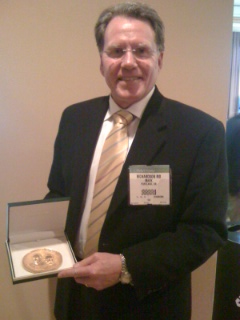 The American Laryngological Association (ALA) has announced that Mark Richardson, MD, MBA, Dean, School of Medicine, is the recipient of the Gabriel F. Tucker Award for 2011.

Established in 1987, the Award is presented to a laryngologist who has made significant contributions to the field of pediatric laryngology or to the Association, or both. It is given annually if an outstanding recipient is identified.

Dean Richardson was presented with the Award, which consists of a medal, at the 2011 annual ALA meeting in Chicago, Ill.

According to their website, the ALA is a “scholarly organization of physicians and scientists who have made significant contributions to the care of patients with disorders of the larynx and upper aerodigestive tract. The ALA recognizes the accomplishments of these individuals through membership, seeks to encourage research in laryngology and elevate the standards of the fundamental teaching of laryngology in medical schools and postgraduate medical education.”