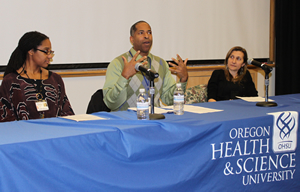 The Center for Diversity & Multicultural Affairs hosted a lecture in celebration of Black History Month entitled, "Mental Health Issues in the African American Community." The panelists addressed broad topics like racism, violence and identity in the context of physical and mental health care.

Christina Nicolaidis, MD, MPH, Associate Professor, Department of Medicine, conducts community-based participatory research on depression in the African American community. "When [African American women] talked about health care it was all about racism," she said. "When they talked about themselves, violence was paramount." Her study, published in the American Journal of Public Health, is detailed in this media release.

Danette Burchill, LCSW, Clinical Director, OHSU Avel Gordly Center for Healing, said Dr. Nicolaidis' research is consistent with her clinical practice. She said a conflict arises between a personal and a group identity for many of her African American patients, partly due to the fact that only about two percent of Oregonians identify as Black, according to 2009 US Census Bureau data.

Emotional distress can lead to biological responses and physical health problems, according to Andre Pruitt, LCSW, Clinical Supervisor, OHSU Avel Gordly Center for Healing. "Because of the struggle with identity, a person is less able to express emotional feeling," he said. "When 'fight or flight mode' is on all the time, you're always reacting." Part of his clinical work is helping patients learn how to turn this response off.

Pruitt also works with people who identify as lesbian, gay, bisexual or transgender (LGBT). He said the decision to openly identify as an LGBT person can be stressful, and his patients sometimes struggle with deciding how to identify first – by race or by social group.

Ultimately, the panel emphasized a need for clinicians to be aware of – but not dependent on – racial, ethnic and social categories. "We plug people into different categories, but no one is really one category for anything," said Dr. Nicolaidis.

The OHSU Avel Gordly Center for Healing, a program within the Department of Psychiatry, specializes in culturally-responsive services.