Dubois scholarship a gift of freedom 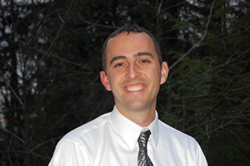 Born in Denver, Colo. and an Oregonian since 1997, Nick Westfall had significant roots in the construction industry through his family. The leap to medicine – and to OHSU – began when he participated in a Health Career Opportunity summer program for underserved youth held on the Marquam Hill campus. Nick had become involved in mentoring programs at college and, through medicine, he found a way to combine his two passions – science and social work.

“Over a four to six week period we were introduced to the life of a medical student, supported in studying for the Medical College Admissions Test (MCAT) and helped in building relationships in the OHSU community,” he said. Many of the faculty, staff, current students and alumni that he met during the course were later to become influential during his time as a student.

Being accepted into medical school was a memorable moment. Nick’s motivation for medicine predicted a successful medical career and his life experience would bring a valued perspective to the classroom. But the reality of modern medical student tuition rates means that the average medical student leaves OHSU over $160,000 in debt – not including undergraduate debt.

“I was very fortunate to benefit from the Earl Dubois Scholarship, which goes to one student per class and provides partial funding for all four years,” he said. “Having these funds available for students is more than a gift of money. It is a gift of freedom – the freedom to choose how, why and where we will practice medicine after we graduate, without the pressure to prioritize a higher-paying specialty over the rewards of primary care practice in an under-served community.”

Over 45 percent of students in the MD program currently benefit from scholarship assistance, thanks to the generosity of our donors. For Nick, the Dubois Scholarship was a transformational gift that helped him on the road to becoming a physician.

“As I complete my MD degree and anticipate six years of residency training, I can’t say enough about the kindness of people willing to endow and maintain scholarships,” he said. “They truly understand where medicine is headed and can provide the support today’s students need in making that promise a reality.”