Paper of the Month: Maternal nutrition and understanding its impact on the fetus

This month's featured paper is from PloS ONE, and is titled “Maternal high fat diet is associated with decreased plasma n–3 fatty acids and fetal hepatic apoptosis in nonhuman primates.”

Over the last twenty years, obesity has dramatically increased across the United States and the industrialized world. A particularly concerning part of the emerging epidemic of obesity is the increasing rise in the percentage of children and adolescents that are either overweight or at risk for overweight. An emerging body of evidence has demonstrated that the intrauterine environment has profound effects not only on fetal growth and development, but also on the offspring’s risk for developing disease such as obesity later in life. The mechanisms of the fetal origins of adult disease are poorly understood.

Through the ongoing work of Kevin L. Grove, PhD, and Susan Smith, PhD, Senior Scientists from the Oregon National Primate Research Center, OHSU has a unique nonhuman primate model available to help understand the mechanisms by which the intrauterine environment affects the developing offspring. In this paper, the authors focused on the effects that a maternal high-fat diet has on the development of early-third trimester nonhuman primate fetuses. The early third trimester in nonhuman primates correlates with the development of important metabolic systems in pre-mature human infants.

“DHA is an extremely important essential fatty acid that is necessary for proper brain and visual system development,” said Wilmon Grant MCR, PhD candidate and lead author on the paper. “The early-third trimester is a time of intense brain development in the nonhuman primate. Our findings suggest that the consumption of a maternal high-fat diet decreases the availability of critical omega-3 fatty acids, which are necessary for proper brain growth and development in the developing fetus.” 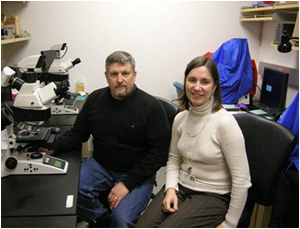 Omega-3 fatty acids are also important anti-inflammatory fatty acids. Previous work had demonstrated that early third trimester fetuses from mothers fed the high-fat diet had evidence of increased inflammation and non-alcoholic fatty liver disease (NAFLD). The current paper extended these findings by demonstrating that there was increased liver cell death among fetuses from mothers fed the high-fat diet. This suggests that non-alcoholic steatohepatitis (NASH) characterized by increased inflammation, fatty liver and hepatic cell death may be present in the high-fat fetal liver prior to birth. The authors hypothesize the low concentrations of omega-3 fatty acids may have contributed to the inflammation and liver disease observed in these primate fetuses.

The team’s nonhuman primate studies have thus far provided critical insights into the fundamental molecular mechanisms underlying susceptibility to pediatric and adult metabolic disease. Plans are already in place to determine if similar patterns are observed in humans with the goal of developing safe and effective therapeutic approaches aimed at preventing childhood obesity and its devastating co-morbidities.

“Promoting a healthy low-fat diet with adequate omega-3 fatty acids for all pregnant women regardless of their BMI could be one directly translatable public policy result of this research,” said Dr. Gillingham. She added that this approach has also been successful in designed campaigns to curb smoking and alcohol consumption during pregnancy.

(A).  Quantification of hepatic cell death in early third trimester macaque fetal liver from dams consuming a maternal diet that was low in fat (Control), or a diet high in fat (High Fat). The Diet Reversal group was a cohort of high-fat dams that were switched to a control diet during pregnancy.

(B and C).  Representative images of cell death in fetal liver, determined by the dark brown staining, exposed to a maternal diet low in fat (B), or high in fat (C).  By switching high-fat dams to a control diet during pregnancy, fetal hepatic cell death was returned to control levels.  Scale bar, 50&#61549;m.

The School of Medicine newsletter spotlights a recently published faculty research paper in each issue. The goals are to highlight the great research happening at OHSU and to share this information across departments, institutes and disciplines. The monthly paper summary is selected by Associate Dean for Basic Science Mary Stenzel-Poore, PhD, and reviewed by Dean Mark Richardson, MD, MBA, and Vice President/Senior Associate Dean for Research Dan Dorsa, PhD.

This paper was selected because it involves a new and important model in nonhuman primates that bears substantial significance to human maternal-fetal health. By partnering with the Oregon National Primate Research Center, the authors unite unique expertise from a number of OHSU units that together are able to tackle extraordinary problems and make inroads into vitally important issues of human health.