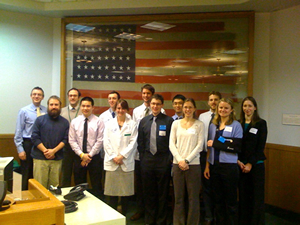 During this legislative session, OHSU medical students have frequently made appearances in Salem to talk about health policy with their state representatives. The students have done this by traveling alone, in pairs or in groups to speak to the legislators and their staff about the important need for support of more funding for health care professionals, particularly in rural or underserved areas of the state.

Married couple Sarah Williams, MS2, and Jay Williams, MS3, spoke to the House Health Care Committee in February about their desire to practice medicine in a rural area, but voiced anxiety about the consequences of $500,000 in medical school debt. Two bills addressing this particular issue are currently under consideration by this committee: HB2400 is "The Loan Repayment Bill" and HB2397 is "The Loan Forgiveness Bill." If passed, both could have a positive impact on attracting physicians to the state by helping to pay down loans in exchange for work in rural communities.

In addition, students spoke directly with lawmakers in Salem on key issues such as the need to increase residency slots (GME) for primary care physicians and the importance of preserving OHSU funding. Twenty students attended the Oregon Academy of Family Physicians Legislative Day on March 7 and another group of students attended the Oregon Medical Association Legislative Day on March 17.

At each of these events, students interacted with state health care policy leaders and then met individually with legislators to discuss the issues facing medical students.

Students have also advocated for a single payer health system in Oregon, including in particular Richard Bruno, MS2, president of his class.