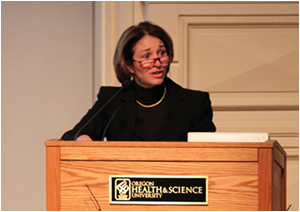 Addressing a packed audience at the inaugural Kathryn Robertson Memorial Lecture in Global Health, OHSU President Joe Robertson, MD, said his daughter, Katie, was a woman who embraced life to the fullest. “But my fondest memories of her,” he added, “are of the ways she lived her life with unsurpassed joy.”

Anne-Marie Slaughter*, JD, DPhil, guest lecturer, said Katie Robertson was part of a movement of young Americans who are networked and globally engaged. “It is that connection across cultures, that awareness of interconnected humanity, that will be the theme of my lecture today,” said Dr. Slaughter. Her talk was part of the Global Health Center Memorial Lecture series, which is designed to expand the understanding of complex issues related to global health and development.

Dr. Slaughter’s lecture, titled “The Health of Our World,” focused on the Obama Global Health Initiative. Launched in 2009, the goal of this initiative is to strengthen U.S. global health programs by making connections between investments America has been making in global health for decades.

“One of the things we have done in the Obama administration is to ensure that when Secretary Clinton or President Obama travel, they do not leave matters such as the polio vaccine or maternal health to the health professionals; they elevate it to the level of highest diplomacy,” said Dr. Slaughter, a former Obama Director of Policy Planning at the U.S. State Department.

She offered the country of Sierra Leone as an example of where all of the pieces “aren’t connected,” pointing out that women with children often visit multiple clinics to find care, including separate clinics for primary care, pregnancy and HIV/AIDS status, rather than the convenience of a single clinic that can address all of her family needs.

“When we treat a woman we also ensure that her children are better cared for, and of course, all of her family. It’s the single best way to deliver health to a much broader part of the community,” said Dr. Slaughter.

She pointed out that providing women with ease of access to care, as well as increasing their participation in health care planning, is crucial toward improving health outcomes. This includes equipping women with cell phones. “Ninety-five percent of women in African countries report that having a cell phone makes them feel safer, more connected to friends and family, improves their independence and, for some, their livelihood.”

She also addressed the importance of empowering men and boys to be better role-models for gender equality, especially in societies where young men identify their role as “fighting.” 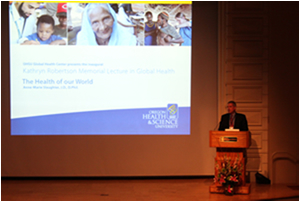 Speaking of an “interconnected humanity,” she said the importance of global health was not just a foreign policy priority for governments, but a concern for universities, corporations, non-governmental organizations (NGOs), community groups and for centers like the OHSU Global Health Center.

Created in 2007, the OHSU Global Health Center received one of only 31 NIH Fogarty Center Framework Awards in Global Health. The Center was established at OHSU through the efforts of students, staff and faculty who passionately believe, as did Katie Robertson, that life should be lived without borders.

“As Katie Robertson’s life embodied, we are deeply connected,” Dr. Slaughter said. “We have to learn how to mobilize and foster these connections, in ways that will actively solve problems.”

*Dr. Slaughter is the Bert G. Kerstetter ’66 Professor of Politics & International Affairs at Princeton University. She was Director of Policy Planning at the U.S. State Department from January 2009-2011. She played a key role in helping to make global health a much more central part of U.S. foreign policy.