Identifying patients at risk for trafficking 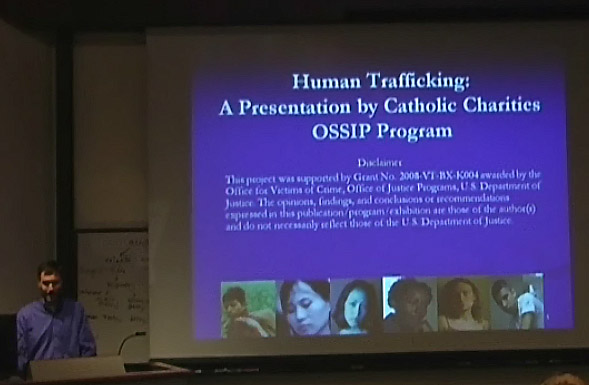 Medical providers are in a unique position to identify and help hundreds of Oregon residents trapped in modern-day slavery.

Trafficking is a federal crime, defined as “the use of coercion, deception or force” to put people in “slavery-like conditions.” There are two general categories: sex trafficking and forced labor in agriculture, construction, restaurants and other industries.

“Generally what we have seen here in Oregon is . . . U.S. citizen children end up being in sex trafficking and immigrant children and adults, generally young adults, end up in labor trafficking,” said Killmer, who coordinates Catholic Charities’ Outreach and Support to Special Immigrant Populations program, which uses a federal grant to help trafficked immigrants. He spoke at a March 28 lecture sponsored by Healers for Human Rights, an OHSU student group.

Given its shadowy nature, trafficking’s prevalence is hard to pinpoint. The U.S. government estimates that roughly 15,000 people enter the United States as slaves each year, while 250,000 people live as slaves in the country. Oregon has a significant trafficking problem because it sits on Interstate 5, a known trafficking route, and has large agriculture and sex industries.

Spotting trafficking can be hard since victims range from U.S. children forced into the sex trade to immigrant seniors kept as domestic servants. But most victims share several features: They are trapped by debt and fear, overworked, constantly monitored and denied basic needs, including sanitation and prompt health care. Medical warning signs including trauma from beatings; fractures or other injuries that have healed without proper treatment; work-related respiratory disease and repetitive use injuries; malnutrition; exhaustion; frostbite or heat stroke; evidence of non-medical abortions; sexual infections or traumas; and burns, branding or tattoos. Patients generally are accompanied by someone involved in the crime who tries to answer all questions and do not seek care until they have grown very sick.

“Traffickers will take their victim into a medical setting only as a last resort,” Killmer said.

Providers who suspect trafficking should isolate a patient from the person who brought her in and talk to the patient in a safe and comfortable setting, stressing confidentiality. Many people do not see themselves as crime victims, so Killmer suggests asking broad questions to elicit information about their life: Do you know where you are? How did you get here? Are you paid for your work? Do you get to keep the money you earn? Were you injured while working?

If possible, Killmer suggests keeping patients until a social worker can meet them. Providers also can try discreetly to get information identifying whoever accompanied the patient and can refer patients to law enforcement or other social service resources. Except in mandatory reporting cases, though, Killmer said providers should only report trafficking if the victim agrees, since they may be in immediate danger.

Assume trafficked people won’t be able to return for more care and provide as much treatment as possible in one visit, including needed medication, Killmer said. He suggests writing important information for patients on a piece of paper that is small enough to hide and that lacks letterhead or other information identifying its source.

Providers who want more information can download a free “Caring for Trafficked Persons” guide written by the United Nations, International Organization for Migration and London School of Hygiene & Tropical Medicine.