From the Archives: “If I had it to do over again, I’d be an engineer.” 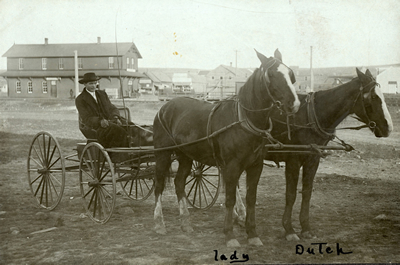 H. M. Greene was born in the Blue Ridge Mountains of North Carolina in 1878. He moved west to attend the University of Oregon Medical School (precursor to OHSU) graduating in 1904.

After completing post-graduate studies at Vanderbilt Clinic, he served internships at Multnomah County Hospital, Coffey Hospital and North Pacific Sanitarium. As an intern, he operated the first x-ray machine on the West Coast at the Coffey Hospital.

In 1916, he was commissioned as 1st Lieutenant in the Medical Reserve Corps of the US Army, becoming Commander and Chief Surgeon of Base Hospital 46.

He served on the UOMS Faculty and was a member of the clinical faculty in the GU clinic at the Portland Free Dispensary, and lecturer in anatomy, physiology, and hygiene in the Multnomah Training School for Nurses (1919-1925). As well, he maintained a practice for 53 years and was on the staff of Good Samaritan Hospital.

Greene was also an inventor. He created the Greene special puncture needle, which reduced post-dural puncture headaches and a barbicide that he manufactured and sold from his home.
He was an active member of the Chamber of Commerce, the Oregon State Medical Society, City and County Medical Societies, and was master of the Scottish Rite Albert Pike Lodge. He was co-founder of the Anglo-Saxon Christian Association of Portland, and was co-editor of The Reminder of Our National Heritage and Responsibilities newsletter.

Tragically, Dr. Greene developed debilitating cataracts as a result of extended exposure to radiation. He fought tirelessly, yet fruitlessly, to have the military take responsibility for the damage.

Dr. Greene built a home on the basalt cliffs of the Willamette River. Despite his partial blindness, once he closed his medical office, he continued to see patients in his home office until his death in 1962 at the age of 87.