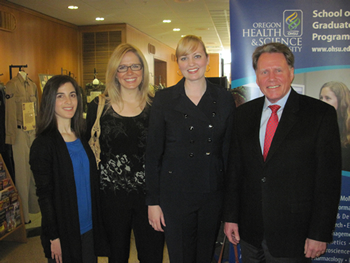 OHSU Government Relations hosted OHSU Day at the Capitol April 18. The School of Medicine had several departments represented, including Graduate Studies, the Child Development and Rehabilitation Center, the Center for Evidence-based Policy and the OHSU Knight Cancer Institute.

Governor John Kitzhaber released his Recommended Budget on Feb. 1, which included an overall 20 percent reduction to OHSU relative to the appropriations from the General Fund provided to OHSU in the 2009 legislatively adopted budget. State funding to OHSU has been declining for some time, and is now among the lowest in the country to public institutions.