Fernando and Dolores Leon: Partners in living and giving 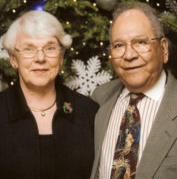 Dolores Leon, MD ’75, has always tried to learn from her patients. As a pediatric anesthesiologist she has spent 28 years explaining to children what she was going to do to help them during surgery. “For many years I said, ‘Hello. I’m Dr. Leon and I’m going to help you go to sleep before your surgery so that you don’t feel anything,’ and then I’d describe what I was going to do. Some years into my career one young patient listened very intently to my description and then asked, ‘But are you going to be there to wake me up as well?’ Thanks to that young man I made sure I covered the waking up part every time after that.”

Dr. Leon was already a qualified nurse when she and her husband, Fernando Leon, MD R ’57, decided she should pursue a life-long dream to go to medical school. “I graduated in 1954 from Myrtle Point, Ore., a very small town where I was the only girl in the physics and chemistry classes,” she said. “I always wanted to be a physician but I was one of five children and there just wasn’t the money to go to medical school.” By the late 60s and early 70s, things had changed. “This was a fortunate time for us,” said Dr. Fernando Leon. “When I first arrived from Mexico in the 50s non-US physicians were not universally welcomed. Things changed when the Korean conflict ended and it became clear we would be engaging in Vietnam. With the draft and the shortage of physicians, some doors started to open.”

Dr. Dolores Leon believes those same changes might have been behind her acceptance to OHSU in 1971. “I was older than all of the applicants and we had responsibility for four children at that time,” she said. “I was a very non-traditional student, but a lot of non-traditional things were starting to happen then.” She was accepted into the Class of ’75 along with seven other women and 92 men and quickly established a routine that saw her studying from 1 or 2 am until 5:30 am. “Then I would set the table for breakfast, make dinner in the crock pot and leave for class,” she said.

Dr. Dolores Leon began her practice as a member of the OHSU Department of Anesthesiology clinical teaching staff. She had the opportunity to work in Dr. Albert Starr's cardiac surgery program which was pioneering new procedures in newborns and premature infants. After two years at OHSU, she entered private practice at Providence St. Vincent Hospital where she was involved once again with Dr. Starr's pediatric cardiac procedures and later adult valve and coronary artery surgeries. Dr. Fernando Leon, meanwhile, established a practice as a thoracic and vascular surgeon at Providence Portland Medical Center, specializing in emergency surgery techniques before the advent of Trauma Centers.

Although the Leons have retired from practice, they remain committed to local organizations – the arts, education and Portland State University, as well as OHSU. A dual citizen of the USA and Mexico, Dr. Fernando Leon served Mexico as Honorary Consul for 38 years, and for which he was awarded the Ohtli medal – Mexico’s highest honor bestowed outside its borders. He continues to serve as Honorary Consul Emeritus and also delivers Meals on Wheels weekly.

Together, the Leons volunteer one day a month to perform tattoo removal procedures at Outside In, a local non-profit that works to help at-risk youth obtain the education and employment skills they need to become self-sufficient. “Military policies prohibit serving with certain types of visible tattoos,” said Dr. Dolores Leon. “It feels good to be able to help with something as simple as that – something that helps someone go on to where they want to be.”

Click here to support the Dean's Fund for Excellence.