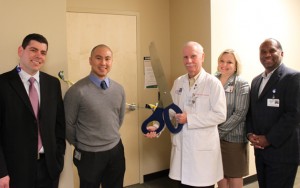 If you see a bright-eyed physician-in-training near the fourth floor of Sam Jackson Hall, chances are they have just emerged from one of thirty new call rooms for residents and fellows, which opened with a ribbon-cutting ceremony April 22. The rooms include a number of features to facilitate rest for busy clinicians with irregular schedules.

Regulations issued by the Accreditation Council for Graduate Medical Education restrict residents and fellows to 80 work hours per week. Call rooms are also required, and provide a safe, reliable location for on-call residents and fellows. They contribute to resident wellness, an important aspect of preventing professional burnout.

“I might use them to take a nap when I’m post-call and too tired to drive home,” said Sarah Gilman-Short, MD, a Family Medicine resident. “It’s good for morale and shows [the administration] cares about our wellness.”

OHSU Healthcare provided funding for the costs of construction, which began in November 2010 and was completed April 15. The rooms are equipped with black-out shades, desks, individual temperature control and thermostat, as well as men’s and women’s locker rooms and shower facilities. Sound control was also considered during construction, with insulation used between rooms and the corridor to help dull noise.

“These rooms are, in a word, ‘spectacular,’” said Don Girard, MD, Associate Dean, Graduate Medical Education (GME) and Continuing Medical Education. “The entire project is a reflection of trust and demonstrated commitment between the hospital, GME and residents to work together.”

“We approached House Staff leadership to see how we could partner to bring them improved call rooms while facilitating expansion of the hospital,” said Cindy Grueber, Chief Operating Officer, OHSU Healthcare. “It’s truly been one of the smoothest projects the administration has worked on.”

The project provides an additional nine call rooms for residents and fellows, replacing the 21 rooms previously located on the 13th floor of OHSU Hospital. That space will be devoted to expanding Hospital capacity. Ian Bowen, Construction Project Coordinator, said over 100 people were involved in the project. 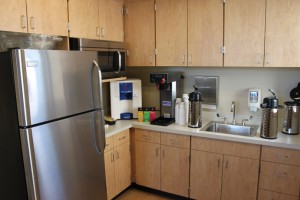 A kitchen space, workroom and lounge – complete with flat screen television – are also included. And just in case restful sleep doesn’t do the trick, the GME office has provided a water filter and an unlimited supply of coffee.