Importance of partnership between OHSU and VA reinforced
May 13, 2011 Portland, Ore.

The week of May 2 was National Veterans Affairs Research Week 2011. In Portland, the week culminated with a presentation of recent research results from five VA/School of Medicine faculty members.

Michael Davey, MD, PhD, Associate Chief of Staff for Research and Development at the Portland Veterans Affairs Medical Center (PVAMC) kicked off the event, followed by remarks by John Patrick, MBA, Director of the PVAMC. Patrick emphasized the importance of the VA partnership with academic medicine generally, and then called out OHSU specifically, because of the value added to health care when such a “critical mass of scientists are able to interact on a daily basis.”

James Henry, PhD, Research Career Scientist at the PVAMC and Research Professor in the Department of Otolaryngology/Head & Neck Surgery, discussed recent results from his work on tinnitus in a presentation titled “Lessons Learned and Help for Veterans.” The research occurs under the umbrella of the National Center for Rehabilitative Auditory Research (NCRAR) located at the PVAMC. Established in 1997, the NCRAR is one of only 14 Centers of Excellence funded by the VA Rehabilitation Research & Development (RR&D) Service, and the only one dedicated to finding solutions to auditory system impairments.

Suzanne Watnick, MD, Staff Physician at the PVAMC and Associate Professor in the Department of Medicine, discussed the results of a multi-center clinical trial titled the Acute Renal Failure Trial Network (ATN) Study. Portland was the top enroller of participants of all the VA sites nationwide, she said. The study, now closed, found that more intensive dialysis practices were not more effective than less intensive practices at reducing acute renal failure (measured by mortality) in critically ill patients. Since that time, clinical practices have begun to shift to the less intensive protocols, she said, which is easier for patients and less costly. 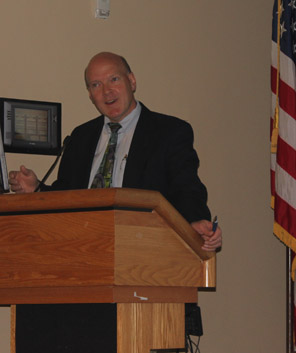 Joseph Quinn, MD, Staff Neurologist at the PVAMC and Associate Professor in the Department of Neurology, discussed the role of docosahexaenoic acid (DHA) in preventing Alzheimer’s disease. The results of this study were published in the Journal of the American Medical Association. Dr. Quinn described the study – 402 participants across 51 sites – with individuals with mild to moderate cognitive decline. The results indicated that supplementation with DHA compared with placebo did not slow the rate of cognitive and functional decline in patients with mild to moderate Alzheimer’s disease.

Michael Riscoe, PhD, Research Chemist at the PVAMC and Professor in the Department of Molecular Microbiology & Immunology, presented information about work on identifying drug therapies for malaria, which kills one million people worldwide each year. His presentation was titled “Back to the Future for New Drugs to Combat Malaria,” and described his goal of designing and testing drugs that block the function of parasite mitochondria while leaving human cells untouched. Dr. Riscoe’s work was also featured in the print magazine Research Today (page 16), distributed nationwide by the VA headquarters in Washington DC in honor of Research Week. 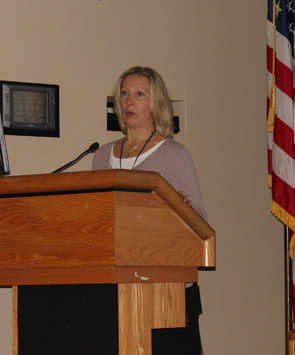 Kristine Wiren, PhD, Research Career Scientist at the PVAMC and Professor with appointments in the departments of Behavioral Neuroscience, Medicine, and Anesthesiology & Perioperative Medicine, presented an investigation into the gender differences in alcohol abuse and withdrawal. “Most alcoholics and addicts are male, and that exists across cultures and time, suggesting a role for biology,” she said. This research suggests that while women are less susceptible to alcohol addiction, they are more at risk for neurological damage for this abuse, among other outcomes.

Jeff Kirsch, MD, Associate Dean for Veterans and Clinical Affairs who attended on behalf of the School of Medicine Office of the Dean, said “It truly was a privilege to be there. These scientists are doing remarkable work and their commitment to our veteran’s community comes through loud and clear.”

For more information on VA research, visit the US Department of Veterans Affairs research news site.


Coming soon: A feature article about the history of the research partnership between the PVAMC and the School of Medicine with insights and anecdotes from Grover Bagby, John Kendall, John Crabbe and more.