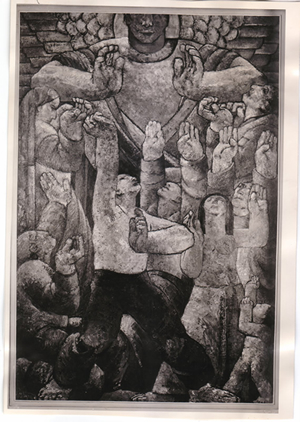 How did the University of Oregon Medical School (predecessor of OHSU) lose an entire mural? For 16 years, a monumental work of art by the painter Darrel Austin (1907-1994) graced the entrance of Mackenzie Hall. And then it disappeared.

As part of the economic recovery effort during the Great Depression, the federal Works Progress Administration (WPA) commissioned artists across the country to create artwork, primarily for government buildings. In 1936, the WPA engaged Darrel Austin, then a struggling young artist, to create The Evolution of Medical Education for the University of Oregon Medical School. The mural consisted of four panels, each measuring six by eight feet, and representing Ignorance, Doubt, Revolt, and Triumph. Influenced by Mexican muralists such as Diego Rivera, the brightly colored panels featured vigorous, symbolic human figures that represent the triumph of education over ignorance. The completed mural was installed in the entryway of Mackenzie Hall.

After his work for the WPA, Austin went on to success as an artist in Los Angeles and New York. As his reputation grew, so did interest in his early work. But when art connoisseurs inquired about The Evolution of Medical Education, it was too late. The panels were removed from the walls of Mackenzie Hall during a 1952 building renovation, and have never reappeared. The mural is now considered lost, though it’s not known whether it was destroyed, given away, or forgotten in storage. Black-and-white photographs of each of the four panels have survived.

Other pieces by Darrel Austin are at Timberline Lodge, Grant High School, the Portland Art Museum, and the Oregon Historical Society. His work is also held in national collections including the Metropolitan Museum of Art, the Museum of Modern Art, and the Museum of Fine Arts, Boston.


Pictured: One of four panels from Darrel Austin’s mural The Evolution of Medical Education, 1936