A woman whose mother died of breast cancer is concerned about her risks of developing the disease. She reads about drugs that can be taken for primary breast cancer prevention, and visits her primary care provider to ask for advice. Clinicians look to national societies and independent panels for guidelines on such health interventions, and when national health leaders look for methods to construct guidelines, they look to Mark Helfand, MD, MPH, MS, FACP. 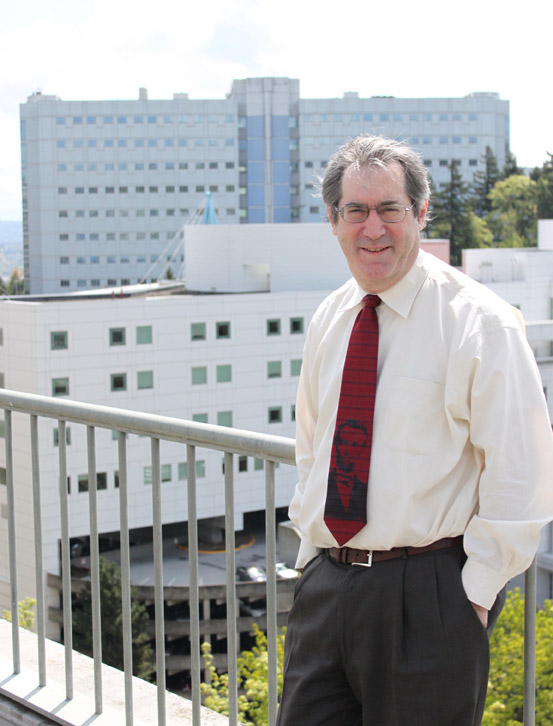 "If you practice medicine – and I do – you realize every day that you don’t have the evidence that is as pertinent to the real-life situations as you need,” said Dr. Helfand, Director of the Oregon Evidence-Based Practice Center (EPC), a Professor in the Departments of Medicine and Medical Informatics & Clinical Epidemiology, and a staff physician at the Portland Veterans Affairs Medical Center. The Oregon EPC is the Scientific Resource Center for the Agency for Healthcare Research and Quality’s Effective Health Care Program. Thanks to the Oregon EPC’s 2009 report, written by Heidi Nelson, MD, MPH, Professor, Department of Medical Informatics & Clinical Epidemiology, and colleagues,* this woman’s clinician would know that tamoxifen and raloxifene – the two medications approved by the Food and Drug Administration for primary breast cancer prevention – had similar effects on breast cancer outcomes regardless of age and family history of breast cancer in a head-to-head trial. With that evidence in mind, they could speak with the patient to determine which medication would be best for her. This is just one example of the impact of comparative effectiveness research (CER) and systematic reviews of health interventions. “I’ve worked with a lot of researchers and it is rare to find someone who understands both the research world and the world of decision making, particularly by consumers,” said Pam Curtis, MS, Deputy Director, Center for Evidence-based Policy at OHSU. “Mark does that better than anybody. He has the gift of brilliance and the gift of genuine respect for clinicians.” Dr. Helfand has devoted the last 30 years of his career to research in medical decision making, and his expertise has landed him positions on numerous national committees for prominent organizations such as the Institute of Medicine (IOM) and, as announced by the U.S. Comptroller General in January 2011, the new Patient-Centered Outcomes Research Institute (PCORI). PCORI is the country’s first nonprofit institute dedicated to outcomes research, and was established in The Patient Protection and Affordable Care Act of 2010. “Mark and his group’s work is among the most widely recognized health services work at OHSU,” said John McConnell, PhD, Associate Professor, Department of Emergency Medicine and noted health economist. “When I go to conferences and speak to the big names and national leaders in health services research, once they learn I’m from OHSU, the first thing they mention is how valuable and important Mark Helfand’s work is.”

Related article: The Implications of CER for Academic Medicine

CER is a topic not immune to controversy, which surfaced during the health reform debate prior to the passing of The Affordable Care Act. Skeptics have tried to equate CER with limiting services, but Dr. Helfand approaches the matter differently. “I’ve never believed that bringing evidence to bear on a question makes it easier to make decisions entirely based on cost or restricting things for financial reasons. In fact, in my experience, CER makes it hard to do bad decision making.”

Informed decision making is at the heart of Dr. Helfand’s work on the IOM Committee on Standards for Systematic Reviews of Comparative Effectiveness Research, which released their recommendations in the March 2011 report, “Finding What Works in Health Care: Standards for Systematic Reviews.” In the report, Dr. Helfand and his colleagues emphasized the need for greater collaboration between stakeholders of all kinds – government agencies, professional societies, researchers and patient interest groups – in order to improve systematic reviews and, ultimately, aid clinicians who wish to integrate research into their daily practices. Collaboration is a hallmark in Dr. Helfand’s career. During Gov. John Kitzhaber’s previous administrations, he contributed to evidence reviews on drug classes and engaged with citizen panels who informed the Oregon Health Resources Commission. To do this effectively, he developed a concept of “separate identities” when working with policy makers – he and his colleagues understood the needs for information but were following their own scientific principles to avoid bias. So despite knowing that policy makers might be interested in a certain set of outcomes, his work was guided by the needs of patients, caregivers and clinicians. “Often, the published literature is a mismatch to what people need to know,” said Dr. Helfand. “We weren’t the first ones to figure that out. I was inspired by the pioneers… but we were one of the few to make it something we did in real life.” Dr. Helfand was appointed as a member of the Methodology Committee for PCORI. “The methodology committee’s role is to work with policy makers and to inform their agenda with independent scientific advice and judgments,” said Dr. Helfand. “Since I came to OHSU, we’ve always tried to engage with policy makers. There are a lot of researchers who find that difficult … we decided long ago that the work we do needs to inform real health care decisions.”