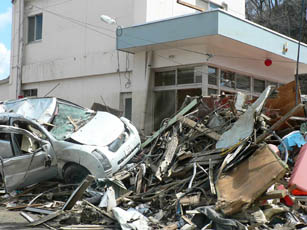 Even after the flood of text messages that woke him up the morning of March 11, the realization of a massive earthquake and tsunami and the frantic organizing of his departure to Japan to provide medical relief, Daisuke Yamashita, MD, was only partially prepared. The scope of the natural disaster only became evident once he arrived in his native country.

“I was walking in Tokyo and almost collided with a bicyclist because it was so dark. I grew up there – this city is always full of light,” said Dr. Yamashita. “It was such a bizarre feeling walking around downtown with such little light and very few people.” Although Tokyo is over 200 miles from the epicenter, there was an electrical shortage after the earthquake.

Dr. Yamashita, a Department of Family Medicine Instructor and Clinical Leadership Fellow, spent a month in Japan, first in Kesennuma and then Onagawa. Taketo Watase, MD, an Administrative Fellow in the Department of Emergency Medicine, also spent several weeks providing relief to communities in Japan. They both spoke during the 28th annual Student Research Forum in May.

Kesennuma was especially hard hit during the disaster. A large fire broke out after the earthquake due to an oil spill – in total, Dr. Yamashita said 10,000 people are still missing or dead from this city of 70,000. Dr. Yamashita worked with the Japanese Primary Care Association to develop a one-day training session for medical professionals going into shelters and also provided health assessments. 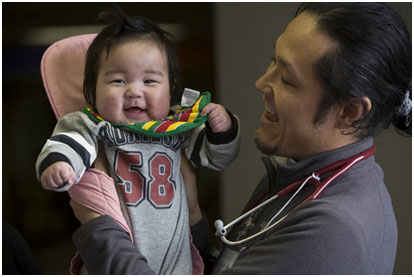 Nutrition and oral hygiene were the hidden health issues when he arrived. Drawing on a theme found in process improvement work, Dr. Yamashita embarked on a series of kaizen initiatives (the Japanese word for “improvement”) to better connect medical relief with the needs of community members. For example, Kesennuma culture dictates brushing one’s teeth in the morning; due to lack of toothpaste and indoor facilities, many elders were simply not brushing. This, compounded by the fact that many evacuees were in shock and/or lying prostrate for most of the day, could lead to aspiration pneumonia and other serious health issues. Instead of using antibiotics, as one medical team suggested, Dr. Yamashita and his interprofessional team focused on improving access to nutritious food and encouraging disaster victims to stay as active as possible.

“Medical relief has to be balanced so it not only helps but provides independence for the local organizations,” said Dr. Watase, who also spent time in Kesennuma. 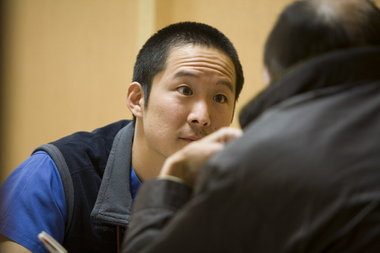 Both physicians said they witnessed a spirit of endurance during their work in Japan. Japanese physicians – victims themselves – worked alongside relief teams. Families took in stranded community members. The Oregonian featured Drs. Yamashita and Watase in recent articles.

Near the end of his mission, Dr. Watase said he began to wonder if his presence was really helping. He recalled speaking with an elderly woman who clutched a pill he prescribed to her and thanked him with tears in her eyes. “I was wondering why she was so grateful for this single pill,” he said. “I found out she and her granddaughter are the only living survivors in their family, and this pill meant she could manage her health for another day. Simple things can make a big difference.”