Because medical school tuition is no longer only $600 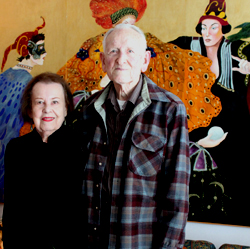 Mitchell Heinemann, MD '44, is one of the oldest members of the OHSU School of Medicine alumni community. Recently, in a conversation with the School of Medicine, he recalled details from his life, including where he was the day Pearl Harbor was bombed. "I was in the path lab," he said, "studying microscopic slides. Almost everyone in the lab at the time knew that 'we were in the army now.'"

Following the raid on Pearl Harbor in 1942, medical school terms were rescheduled to continue through the summer and the class graduated in September 1944. After military service, Dr. Heinemann began practice as a general physician in the Oregon communities of Florence and Milton-Freewater.

It was then that he was able to winnow his future professional choices down to a decision to specialize either in pathology or radiology. "Pathology won out because it was a chance to learn about a subject I knew so little about it," he said.

He was accepted as a pathology resident at Good Samaritan Hospital in Portland, and followed this with a two-year fellowship at Columbia Presbyterian in New York, NY. After a final year at Mercy Hospital in San Diego, Calif. he returned to Portland as assistant pathologist at Good Samaritan Hospital, where he spent the rest of his career. During his tenure he also supervised an accredited Pathology Residency Program.

Throughout his career, Dr. Heinemann witnessed and participated in a significant change in pathology as the discipline and its practice were revolutionized by computer technology. "Spectrophotometry was just coming in at that time, and we acquired the first chemistry analyzer in Portland," he said. "Things are much more sophisticated now, but I still remember what a change it made for us to be able to perform about a dozen different chemical analyses from a single sample of blood."

When Dr. Heinemann reflects back on his education, he thinks in part about the struggles to pay tuition. "There were no scholarships then," he said. "At least, if there were, someone else knew about them and I didn't." To cover the $600 tuition per term Dr. Heinemann worked as night librarian in the OHSU Library and unloaded box cars at the Front Street railway station on weekends. These early experiences shaped his rationale for giving. Dr. Heinemann is a member of the School of Medicine's 1887 Society and a supporter of the Dean's Fund for Excellence.

"As I see it, everyone should give something. Part of my success is due to the education I have had, and I'd like to give some of that back; and so I do. Our libraries, which I love, and other student resources always need our support. And as we all know, tuition is no longer only $600."

Pictured: Dr. Heinemann and his wife, artist Elaine Heinemann, in front of one of her paintings.