Drs. Biagioli and Steiner get muddy for multiple sclerosis

They also have a very personal perspective on that world – because both Drs. Biagioli and Steiner, Associate Professors in the Department of Family Medicine, have multiple sclerosis. 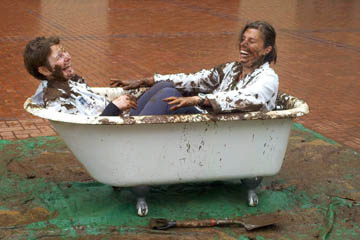 But they've both chosen to challenge their multiple sclerosis head on. And it's in that spirit that they've joined forces to become a juggernaut team getting ready for Mud Run MS Portland, a June 18 fundraising event for the National MS Society.

The run will feature a 10-kilometer military-style obstacle course in which participants will be crawling over walls, up and down hills, commando style under netting and very often through the mud. The event – open to everyone – is meant to symbolize the obstacles people with multiple sclerosis sometimes face in their day-to-day lives.

Drs. Biagioli and Steiner first decided to run the race separately, and figured they would raise a few hundred dollars from friends and family. They've since joined forces to form the "MS Squared – Mud Slinging for MS" team. And they've now raised more than $10,000 in contributions – among the most of any team registered for the event. Their goal: raising $25,000 through the event.

Both Drs. Biagioli and Steiner remain very healthy and active, and both routinely exercise to help fight their MS. They both also see the run as not only a way to raise awareness about MS, but to let people know that people with MS can often fight the disease very successfully.

"It brings an awareness to the community," said Dr. Biagioli. "And I think it's hopeful – especially for people who are recently diagnosed – to know there are people who aren't in wheel chairs who have MS."

"I know I'm lucky," said Dr. Steiner. "And what I do want to say is: really focus on what you can do and don't look at MS as a life sentence. Because it doesn't have to be. You can really do lots of cool stuff."

Drs. Biagioli and Steiner are encouraging others at OHSU to participate in the event, or to support the MS Squared team.

More information on the event is at www.mudrunmsoregon.com. People can donate to MS Squared or Join the Team at the national MS Society website.

Tags School of Medicine Healthcare
Previous Story Behavioral Neuroscience celebrates 50-year anniversary Next Story From the Archives: Breaking down the gender barriers in the 19th century