"The personal stories of my students were deeply moving. Many of them had lost family members and friends to both genocide and HIV/AIDS."

What struck Beth Habecker, PhD, immediately was their commitment to helping their country. “I heard so often the sentiment that they were in medical school for the purpose of helping to rebuild their war-torn country,” she said.

Dr. Habecker is a Professor with a primary appointment in the Department of Physiology & Pharmacology, and an additional appointment in the Department of Anesthesiology & Perioperative Medicine. Her research is focused on understanding how autonomic nerves are altered by injury or disease. She has received numerous awards at OHSU for teaching excellence, teaching both in the MD and Graduate Studies programs, and serves as a mentor to many trainees – from undergraduate and high school students interested in science to post-doctoral fellows.

But in January 2011, Dr. Habecker took a break from all of this to spend a month teaching pharmacology to 31 medical students in Bujumbura, the capital city of Burundi – a landlocked country in eastern Africa – at the Hope Africa University, which opened its doors in 2004.

During years of civil war, higher education in Burundi was completely shut down. Even though reconstruction efforts are beginning to gain traction, Burundi remains one of the poorest countries in the world, struggling with many challenging issues, including poor access to education and the shattering effects of high infection rates of HIV/AIDS. 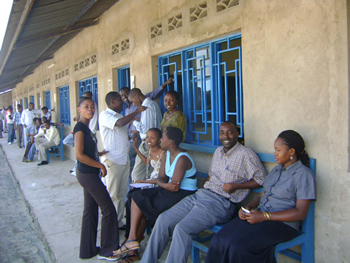 “The personal stories of my students were deeply moving. Many of them had lost family members and friends to both genocide and HIV/AIDS,” she said. “Some of them walked more than an hour each way to attend class.”

At the university, the students were in their fourth year of a seven-year program leading to an MD degree – modeled on the European system where undergraduate and medical school degrees are earned simultaneously. For most of the students, Dr. Habecker was their first female professor, and she was surprised when medical students from other years of the program asked to join the course.

“In part, that was because I was teaching in English,” she said. “Most of the university classes are in French and the Kenyans students were eager to learn the scientific material in English. Sometimes during class, students with better English skills would have to translate in real-time for one another.”

As she prepared for the class in Bujumbura, she chose to focus on a case-study based curriculum. The class met every day for five hours and the idea of lecturing – and asking students to listen – for such extended periods of time seemed unproductive. 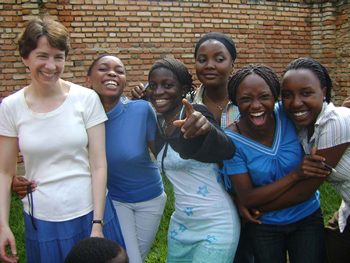 While she thought about what she expected would be inevitable cultural differences in her day-to-day interactions, she also planned for how they would play out in the curriculum. “Teaching pharmacology in the developing world means starting at the back of the textbook and working your way forward,” she wrote on a blog chronicling the experience. The prevalence of malaria, TB, HIV/AIDS, and the need for antibiotics mean that the material most important for her Burundian students are the least important (or least emphasized) in the U.S.

“Beth is one of our stars, for sure. She maintains a highly visible and well-funded research program, is one of our most important teachers and has contributed significantly to leadership activities around the university. And, on top of all of this, she also finds the time to employ her considerable talents to do some good in the world. She is simply amazing!” said David C. Dawson, PhD, Professor and Chair, Department of Physiology & Pharmacology. 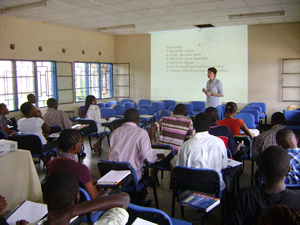 Dr. Habecker was grateful for the support she received from many quarters at OHSU to support this faculty exchange, including the contributions of teaching materials and textbooks. Carrying textbooks around the world was heavy business, but she took what she could and what was needed. “However, I now know that one copy of Goodman & Gilman's The Pharmacological Basis of Therapeutics weighs exactly 9.2 pounds,” she said.