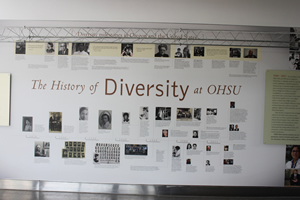 The OHSU diversity story wall was unveiled before a crowded Kohler Pavilion in late June. The wall chronicles the personal stories, recollections and lived experiences of those who walked the corridors of OHSU, while at the same time highlighting the contributions of those whose leadership has led to major diversity milestones both in Oregon and the United States.

“The diversity story wall serves to illustrate the rich legacy of OHSU’s commitment and leadership to advance diversity and inclusion from a historical perspective,” said Leslie Garcia, OHSU’s Assistant Provost for Diversity.

The wall was proposed and planned by OHSU's Diversity Advisory Council, to help fulfill one of the six goals of OHSU’s strategic plan, Vision 2020: “to be a great organization, diverse in people and ideas.”

“OHSU values the power of diversity and we are committed at this moment and in the future to that diversity,” said Norwood Knight-Richardson, MD, MA, MBA, Vice President and Chief Administrative Officer at OHSU. Dr. Knight-Richardson is also featured on the wall.

The wall was unveiled along with the portraits of two people who played crucial roles in expanding Oregon's diversity: OHSU's Dr. Clarence Pruitt and Jean M. Richardson. Charles Wilhoite, CPA, Chairman, OHSU Board of Directors, spoke of their contributions to breaking down barriers. Mr. Wilhoite, the first African American member of OHSU’s Board of Directors (and featured on the wall), said, “Our motto, ‘healing, teaching and discovery coming together,’ is coming together for all people.” 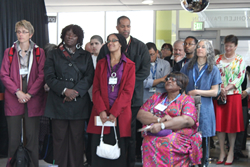 Other physicians honored on the wall include: Mary Anna Thompson, MD, considered to be Portland’s first female physician, practicing medicine from the late 1860s until the 1910s; DeNorval Untbank, MD, the third African American doctor in Portland, arriving in 1929; and Frances Storrs, MD, the first woman resident accepted to the School of Medicine and the first female resident to complete all of her training in the school. Dr. Storrs is a Professor Emeritus in the Department of Dermatology.

The wall and portraits are in close proximity to OHSU's historical wall. Both of these displays will greet visitors as they travel to and from OHSU via the Portland Aerial Tram.

“Diversity is essential to what we do,” said Joe Robertson, MD, MBA, OHSU President. “If we are going to train students to treat a diverse patient population, we have to recruit diverse students. If we’re going to understand the multiple cultures we encounter, we have to feel diversity right in our core. We can’t meet the needs of those we are here to serve unless we are diverse.”