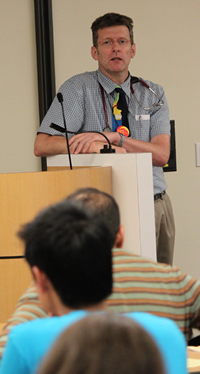 A warm welcome to 250 new residents and fellows, who have recently joined the ranks of OHSU’s Graduate Medical Education (GME) program.

The 183 residents include 19 graduates from the School of Medicine Class of 2011 who were accepted into OHSU’s sought-after residency programs. One hundred forty-eight residents come to OHSU from 33 other states around the U.S., and an additional 16 from countries as far apart as Italy, Israel and India. See the chart below to learn the breakdown by specialty of incoming residents and fellows.

“The strength of the incoming cohort continues to reflect the quality of our GME programs and their national stature,” said Donald E. Girard, MD, Associate Dean for Continuing Medical Education and Graduate Medical Education. “I look forward to the significant contributions that our new residents and fellows will bring to our mission of providing care for Oregonians.”

Sixty-seven new fellows also begin their training this month. Fellows have completed medical school and one residency, and are now embarking on additional subspecialty training in their chosen field. This year, 14 fellows are graduates from medical schools outside the United States.

Over 11,300 graduates applied for one of 152 open slots in OHSU’s GME programs this year. Family medicine, internal medicine and pediatrics drew the largest number of interns, with a total of 70 slots available. Programs in anesthesiology and surgery also attracted a large number of residents and fellows, with 22 slots available.

OHSU ranks tenth in the U.S. for in-state retention of medical residents. More than half of new physicians completing residencies at OHSU, including those attracted from out of state, remain in Oregon to practice. OHSU’s graduate program in family medicine program ranked second in the country by U.S. News & World Report this past year, with OHSU’s primary care program ranked third. Both programs, along with the program in rural medicine, have ranked among the top ten for more than a decade.

Increasingly, graduating medical students are seeking to match together. Here is one such story.

Six of the incoming residents were matched to OHSU as a result of the National Resident Matching Program (NRMP) couples match. Launched in 1984, the couples match allows two partners to submit match order lists of identical length to the NRMP matching system. A complex algorithm treats the two lists as one unit and matches the couple to the highest pair of program choices where both partners obtain a match. The option has become increasingly popular, with a 33 percent increase in national applications in the past five years.

Nina Lamble, MD, and Adam Lamble, MD, met as medical students at the University of Kansas and applied to the NRMP as one of 809 couples in the 2011 match. As part of their research they arranged simultaneous rotations at OHSU in October 2010 – Nina in internal medicine and Adam in pediatrics.

“We had lived in Kansas all our lives and had never seen Portland,” said Dr. Nina Lamble. “We really liked what we saw and we ranked OHSU highly in our match choices as a result of that visit.”

A whirlwind conclusion to their medical school career saw them marry in late April, take a two-week honeymoon, return to Kansas for graduation and then pack all their belongings for the journey to Oregon and the start of their residency training.

“I appreciate how much focus there is in the internal medicine program on continuing our education,” said Dr. Lamble. “Even though we are working and taking care of patients, it is clear that the faculty care about how much we are learning.” 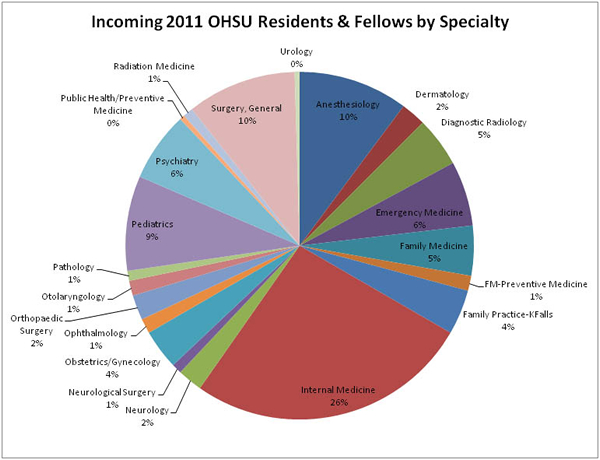