U.S. News ranks OHSU among best in nation, no. 1 in Portland-Metro area 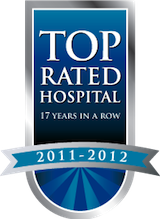 The regional hospital rankings, first announced in March, are posted online with today’s new national rankings; both will be in the U.S. News Best Hospitals 2011-12 print edition Aug. 30.

OHSU is one of just 140 hospitals, out about 5,000 nationwide, that ranked in even one of the 16 U.S. News specialties, and it is the only hospital in Oregon to be nationally ranked.

“These rankings are further testament to the outstanding health care our dedicated and talented physicians, nurses and staff work so hard to provide each day. I am very proud of our team,” said Peter Rapp, OHSU executive vice president and executive director of OHSU Healthcare.

Rankings are based on a score that considers death rates, patient safety, procedure volume, and other objective data. A national survey in which physicians were asked to name hospitals they consider best in their specialty for the toughest cases also was factored in.