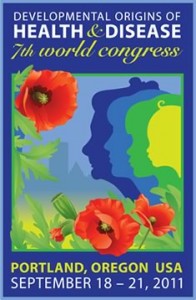 Scientists, students, health professionals, public health officials and community advocates from around the globe will convene in Portland for the 7th World Congress on Developmental Origins of Health and Disease (DOHaD) in September – the first U.S. meeting for the Congress. Why Portland? The location honors OHSU’s international leadership in this burgeoning research area.

“Developmental origins are now understood to underlie most if not all chronic disease. Among the fetal stressors that are known to increase a person’s disease risk in adult life are under- or over-nutrition from the time of that person’s conception, and even – interestingly – prior; high levels of stress hormone in the mother; and low oxygen in the womb,” said Kent Thornburg, PhD, Director, OHSU Heart Research Center, an internationally-recognized leader in this research field.

At least 40 OHSU investigators, spanning 12 School of Medicine units and multiple centers/institutes within OHSU – along with about $14 million in grant awards since 2009 – are focused on aspects of this research. This research area evolved at OHSU under the umbrella of the Heart Research Center – all 40 participating investigators are members of the Center – and has flourished, in part, due to the Center’s collaborative framework. 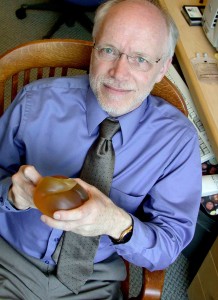 The physician-scientist who founded this field, David Barker, MD, PhD, is an OHSU Professor of Medicine, and joined OHSU in large part due to the reputation of the Heart Research Center and Kent Thornburg in this research area. Susan Bagby, MD, OHSU Professor of Medicine, also a leading researcher in the field and a member of the Center, is Chair of the organizing committee for the conference.

As described by Dr. Thornburg, the story behind this research theme started in 1989, when Dr. Barker brought a new “lens” to the analysis of birth and death records from a group of men and women in Hertfordshire, UK. He showed that among adults who had been born in the birth weight range of 5 to 9 pounds, more men and women died of heart disease when they were born on the lighter end of that range than on the heavier end. He also showed that being born above 9.5 pounds carried a particularly high risk for heart disease.

These data initiated a new field of medicine, now known as the Developmental Origins of Health and Disease (DOHaD). Research in this field has since demonstrated that stresses experienced in the womb – virtually all of which have roots in the social and physical environment – alter the structures of organs in the fetus, thus changing the expression of regulatory genes throughout the lifetime. Together, these two processes lead to vulnerability for disease in adult life.

Such factors and others, including maternal exposure to the kinds of social stresses associated with poor housing and unemployment, are now known to play a role not only in adult cardiovascular disease, but also diabetes, stroke, hypertension, osteoporosis, obesity, some cancers, even osteoporosis. In other words, the environmental conditions affecting mothers while pregnant predict our disease experience as adults.

Since 1989, momentum behind this research theme has grown rapidly. In February 2011, the National Institutes of Child Health and Human Development Scientific Vision Workshop on Developmental Origins of Health and Disease, co-chaired by Dr. Thornburg, issued a White Paper on the topic. Dr. Barker, along with Aaron Caughey, MD, PhD, and Nancy Press, PhD, from OHSU also participated in the NIH workshop. The White Paper acknowledged the scientific evidence around this topic, noted the challenges to moving the research into the necessary next phase, and laid out a path to furthering the research theme. Excerpts from the overview state:

“Our nation faces a crisis of increasing chronic disease on an epidemic scale that will reduce the health and welfare of our citizens and will impose ever increasing financial burdens on society. The outcomes arising from chronic diseases have their roots in fetal and early childhood development … We believe that we now have the scientific potential to significantly increase disease-free status of our society, but our ability to execute this change is hampered by lack of organizational structure and public support. In addition, mechanisms by which new scientific information can be translated and fully disseminated to the public are few.”

The World Congress is part of a process to accelerate the research, as wall as improve public understanding of the potential public health policy implications. David Barker is honorary president and will give an address in in the opening session, “Global Challenges of Developmental Disease,” focusing on the unique and critical role of the placenta as the maternal-fetal interface, impacting all types of programming results and outcomes, and its emerging potential as an accessible and powerful biomarker of future disease.