From the Archives: “An Exceptionally Gifted Teacher” 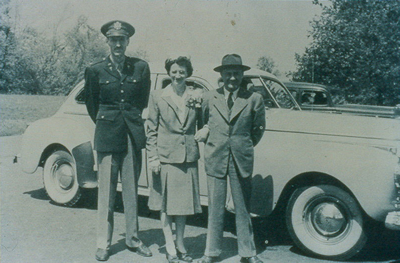 Dr. Howard “Hod” P. Lewis (1902-1985) began teaching anatomy at University of Oregon Medical School while he was still a student. In 1930, Lewis he earned his M.D. degree from UOMS, where he also completed his internship and residency in internal medicine. In 1942 he joined the U.S. Army Medical Corps, serving for four years and rising to the rank of colonel. Lewis longed to return to teaching, and after his discharge from military service, he returned to the faculty of UOMS, becoming the school’s first full-time chair of the Department of Medicine. Lewis oversaw unprecedented expansion of the department, increasing the full-time faculty from two positions to 40. As a teacher of clinical diagnosis, he was known as demanding, rigorous and formal. One of his students remembered, “When I saw him coming down the hall…I would quake in my shoes.” However, he was also known as fair, dedicated and supportive, establishing the Gold Cane Award to recognize student achievement. Lewis was described as “an exceptionally gifted teacher,” and his trainees had a corresponding reputation for excellence. Lewis also served as President of the American College of Physicians and Chair of the American Board of Internal Medicine, among other professional offices.

This 1942 photograph was collected by George Porter, M.D., an alumnus of the University of Oregon Medical School and later chair of its Department of Medicine. Lewis, in military uniform, stands next to Mrs. Lewis and School of Medicine Dean David Baird. The striking contrast emphasizes Lewis’s height and slight build, characteristics that were noted and sometimes lampooned by his students.

“Large and Noble Lines,” Madison Macht, M.D.’s biographical article on Howard P. Lewis, was published in the Summer 2009 issue of The Pharos.