Dr. Keller leads team that focuses on the incurable 20 percent in pediatric cancer 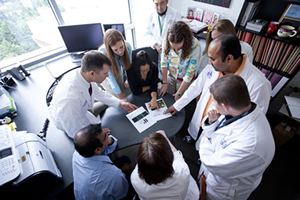 Charles Keller, MD, FAAP, knows what he wants. Or rather, he knows what the children and families of those with rare, incurable pediatric cancers want – effective, personalized treatment. The cure rate for childhood cancers as a group is approaching 80 percent. The Pediatric Cancer Biology (PCB) Program in the Papé Family Pediatric Research Institute at OHSU addresses the causes of mortality in the remaining 20 percent of children. Their work is getting noticed – just a year after joining OHSU, research by Dr. Keller and the PCB team have published 16 papers in high-impact scientific journals.

“We’re looking for the quantum leap for the diseases that can’t be cured,” said Dr. Keller, Associate Professor, Department of Pediatrics and Sada and Rebecca Tarshis Professor in Pediatric Hematology Oncology.

Hepatoblastoma is one of four diseases of priority for the PCB Program, which Dr. Keller leads; the others include sarcomas, brain stem gliomas and neuroblastoma.

“With the leading researchers we already have and the right recruiting focus, we can create the first-ever U.S. lab to study liver stem cell biology in a focused, results-driven way,” said Dr. Keller.

A number of factors led to Dr. Keller’s vision for a program with a focus on Hepatoblastoma when he joined OHSU in August 2010. He recognized the rich environment for liver stem cell research at OHSU in the Oregon Stem Cell Center, led by Center Director Markus Grompe, MD, Professor, Department of Pediatrics.

Dr. Keller also recognized the paucity of U.S. labs dedicated to such focused research. Perhaps the best known work on Hepatoblastoma, he said, is found in the lab of Dr. Marie Annick Buendia at the Pasteur Institute in Paris; other notable research is being done in Germany, Thailand, Japan and Australia.

The research necessary for personalized therapy requires coordinated efforts on several fronts. The Pediatric Preclinical Testing Initiative (PPTI), a part of the PCB Program, investigates new drugs for treating childhood cancers. The PCB Program launched the Knight-affiliated Childhood Cancer Registry for Familial and Sporadic Tumors (CCuRe-FAST), a tumor bank and registry, in May which will inform the creation of pediatric personalized cancer therapy. CCuRe-FAST is open to all pediatric cancer patients at Doernbecher and OHSU, and has successfully established 34 primary cell cultures as of mid-August.

Dr. Keller is wasting no time in assembling a team of researchers whose expertise can contribute to a productive understanding of rare childhood cancers in order to create a plan to tackle the diseases. His team comes from all types of backgrounds – he enlists biochemists, biomedical engineers, molecular biologists and electrical engineers – and focuses as much on creativity as on science. For example, they are the first National Cancer Institute affiliate to use genetically-engineered mouse models to study tumor growth and to explore treatment options.

And he’s not stopping yet. “It’s my goal to recruit two additional high caliber investigators in the next five years,” said Dr. Keller. “Two additional labs – one focusing on glioma and one on neuroblastoma biology – would move us significantly closer to finding innovative treatments for pediatric cancers.” 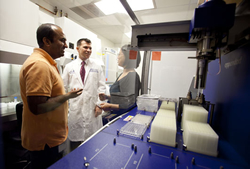 In February, Cancer Cell published a landmark study, in which Dr. Keller and the PCB team discovered the cell of origin for childhood muscle cancer. In March, PCB researchers, led by Jinu Abraham, PhD, identified a promising new approach to overcoming drug resistance in children with an extremely aggressive childhood muscle cancer known as alveolar rhabdomyosarcoma. This study was first published online and graced the April cover of Molecular Cancer Therapeutics. And as an unexpected result, their laboratory published in June in the Journal of Biological Chemistry that an antibiotic that inactivates a gene responsible for preventing eye cancer in children can actually improve muscle stem cell generation, with implications for muscular dystrophy, but not apparently putting those patients at risk for rhabdomyosarcoma.

Part of the PCB team’s research takes multi-disciplinary science to a new level – a new species, to be exact. The characteristics of osteosarcoma in canines are remarkably similar to the disease’s pattern in humans, although it is naturally occurring and 10 times more frequent in the four-legged species. Teaming up with Oregon State University veterinarian Bernard Seguin, Dr. Keller and colleagues study drug response in dogs and hope to find treatments that translate to human patients.

As a member of the OHSU Knight Cancer Institute, Dr. Keller works closely with other Knight researchers and supports Knight programs, such as the Knight Seminar Series, which brings experts from across the country to OHSU, with a focus on translational research.

Dr. Keller’s lab, the PCB Program and the PPTI have active blogs, which you can find on the Charles Keller Lab website. The passion and vision Dr. Keller has for his work is evident in person and online. One of his first posts after joining OHSU ended with these words: “Where there is a will, there is a way. Change can be tangible. And we are accountable.”