Paper of the Month: Determinants of the HIV-1 core assembly pathway.

"This paper was selected because it illustrates powerful use of electron microscopy to determine key molecular determinants of HIV viral structures further highlighting the value of OHSU's commitment to invest in high-end imaging technology for our research community."

This month's featured paper is titled “Determinants of the HIV-1 core assembly pathway.” It was published in the journal Virology.

The research in this paper was conducted as part of an investigative collaboration at OHSU.*

Despite great advances in AIDS diagnosis and treatment, the United Nations Program on HIV/AIDS (UNAIDS) reported that by the end of 2009, 33.3 million people were living with AIDS, 4.1 million people became newly infected, and 2.8 million had died.

The introduction of highly active antiretroviral therapy (HAART) has modified the course of HIV disease, resulting in a better quality of life among HIV-infected patients. However, complicating interactions have been observed with specific antiretrovirals, and treatment may fail due to the selection of drug resistant virus, poor tolerability or toxicity. These observations indicate a continuing need for the development of new drugs that are less toxic and more effective. In addition, it is important to expand the targets of anti-retroviral therapy.

To address this need, researchers conducted by Eric Barklis, PhD, and his team have described investigations designed to exploit the process of mature core assembly as an antiviral target. “The HIV core assembly process is a very attractive antiviral target because it depends on numerous protein-protein interactions that are essential for the establishment of specific protein interfaces within mature viral cores,” said Dr. Barklis. “Small perturbations of these interfaces lead to the assembly of defective and non-infectious virions.” Consequently, the team’s goal in this work was to determine the pathway by which HIV proteins assemble mature virus cores, and to identify novel protein interfaces suitable for the development of new antivirals. 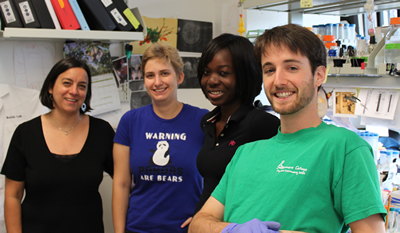 The assembly of HIV-1 virus particles is controlled by the polyprotein precursor Gag (PrGag) protein, which is the key structural protein of HIV-1. During or just after immature viral particle release, proteolytic processing of PrGag results in a conformational change within the capsid protein, one of the four major domains of PrGag, that induces viral morphogenesis. As visualized by electron microscopy, electron dense conical or cylindrical cores composed of about 1000–1500 capsid proteins are evident in mature virus particles. Despite the current structural information of capsid protein forms, it is still not certain how capsid proteins contribute to the different steps of HIV core assembly, and consequently the mechanisms by which HIV-1 capsid proteins assemble to form mature cores in vivo and in vitro are still unknown.

For their investigations, the researchers took advantage of the fact that HIV-1 capsid cores assembled in the test tube resemble those observed in vivo. This allowed the team to analyze the mechanism of mature HIV-1 core assembly, and the contributions of structural elements to the assembly process. “Through the use of several in vitro assembly assay systems, we discovered a novel contribution of one of the capsid protein helices in the control of HIV-1 core morphogenesis,” said Claudia López, PhD, lead author of the paper.

Additional experiments with mixtures of proteins in assembly reactions provided novel analyses of the mature core assembly mechanism. Experiments designed to investigate how core assembly is terminated and nucleated suggested that one defective capsid monomer impairs the activity of more than one assembly competent partner.

As a complementary approach to the analysis of capsid assembly, the team examined the mechanism of core assembly nucleation using a unique immunogold-Electron microscopy approach. Their observations favor a two-step assembly mechanism in which viral RNA plays a nucleating role in HIV-1 mature core assembly. Their evidence suggests that capsid proteins convert to assembly-proficient conformations as they become associated with growing cores.
“We believe that further dissection of these assembly steps will foster the development of antivirals capable of blocking HIV-1 core assembly,” said Dr. Barklis.

The researchers are currently analyzing the effect of some of the HIV-1 capsid mutants shown in this article on virus release and infectivity. They envision that the selection of compensatory mutants will contribute to the understanding of mature core assembly. Using the protein-protein interfaces that they have predicted to regulate HIV assembly, it is possible to calculate capsid protein binding affinities of thousands of small molecules by in silico docking. Molecules identified in this fashion will be subjected to in vitro and in vivo assays so as to determine their potential to serve as the basis of new and potent HIV therapeutics.

Notes: This research was supported by National Institutes of Health grants to Dr. Barklis and by the Collins Medical Trust to myself. The small grant from the Trust was through the OHSU foundation and was granted in 2009.

The School of Medicine newsletter spotlights a recently published faculty research paper in each issue. The goals are to highlight the great research happening at OHSU and to share this information across departments, institutes and disciplines. The monthly paper summary is selected by Associate Dean for Basic Science Mary Stenzel-Poore, PhD.

This paper was selected because it illustrates powerful use of electron microscopy to determine key molecular determinants of HIV viral structures further highlighting the value of OHSU's commitment to invest in high-end imaging technology for our research community.