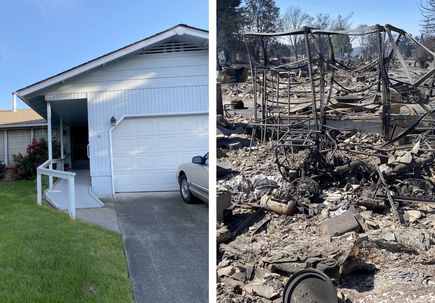 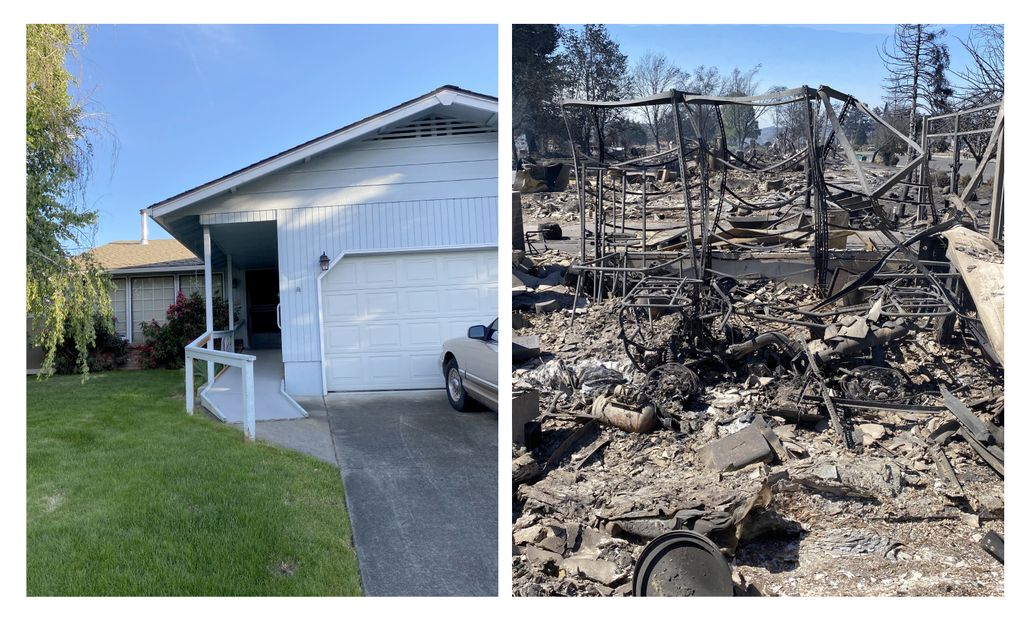 The front exterior of Catherine Adams' and her fiance's first home together. The standing brickwork used to support three large living room windows; new paint, flooring, appliances, and kitchen counters, all installed by the couple, were also destroyed. (Catherine Adams)

Looking to the southern sky from her Phoenix, Oregon, home Tuesday morning, Sept. 8, Catherine Adams could see a black billow of smoke in the distance. Out of an abundance of caution, the student in the OHSU School of Nursing on the Ashland campus asked her four boys to pack two outfits each in case their level 1 evacuation notice escalated.

By afternoon the entire horizon was dark.

Their first home together

Back in May, Adams and her fiancé made a big decision. Unable to hold their planned wedding amid the pandemic, they tried instead to buy a home. They watched as interest rates fell, applied for a loan and hoped. Everything fell into place. 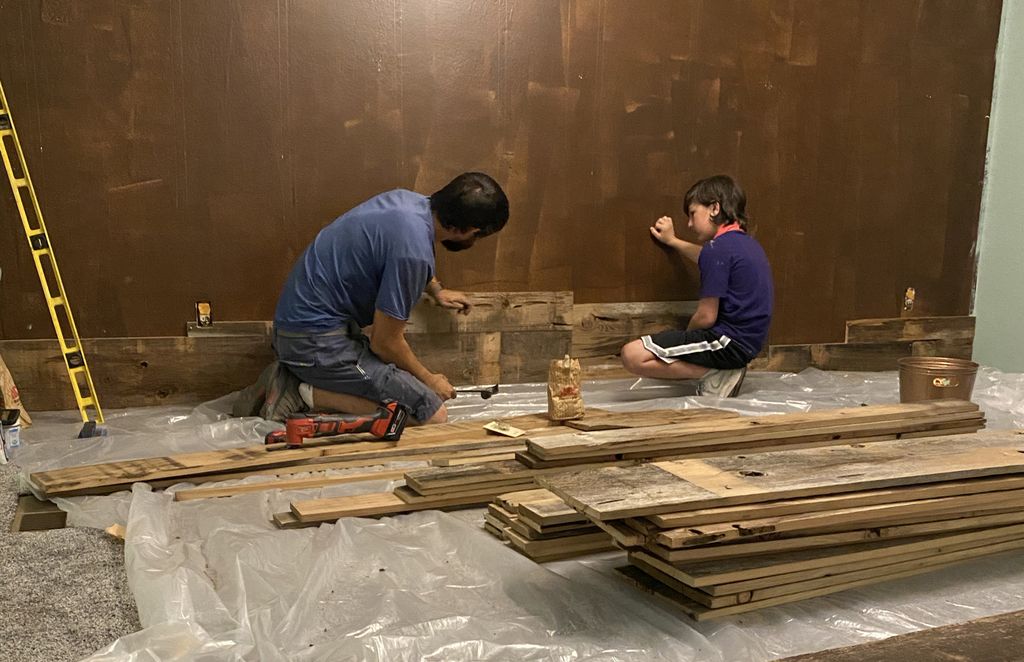 Before the fires, COVID-19 hit and dreams of a big wedding faded away. Instead, Catherine Adams and her fiance decided to take the money they were going to use for their wedding and put it towards their first home together. Now they hope to buy a trailer to live in for a few years while saving up money for a new home. (Catherine Adams)

The house was a well-loved 1985 home that belonged to a family friend who had passed away. The couple spent two months remodeling the home; working tirelessly to add personal touches like new paint, flooring, appliances, kitchen counters, all items they picked out and installed themselves.

“We worked so hard the Sunday night before the fire,” she said, “to move over the last of our belongings, our brand-new washer and dryer, so that we could do our laundry at home.”

As smoke gathered in the air, Adams’ fiancé came home for lunch and stayed home, reasoning that he didn’t want to fight traffic later. They stood in the street with a small group of neighbors watching planes drop fire retardant to keep the flames at bay and talked about the unlikely possibility of fire jumping Oregon 99 to their homes.

Only moments later, Adams said, a state police officer tore through the street in his patrol car.

“The fire is on this side of the road,” he screamed. “Get out now!”

“We ran inside and grabbed the bags we packed,” she said. “In my SUV, I had the three youngest boys, all of our packed bags, and our two large dogs.” 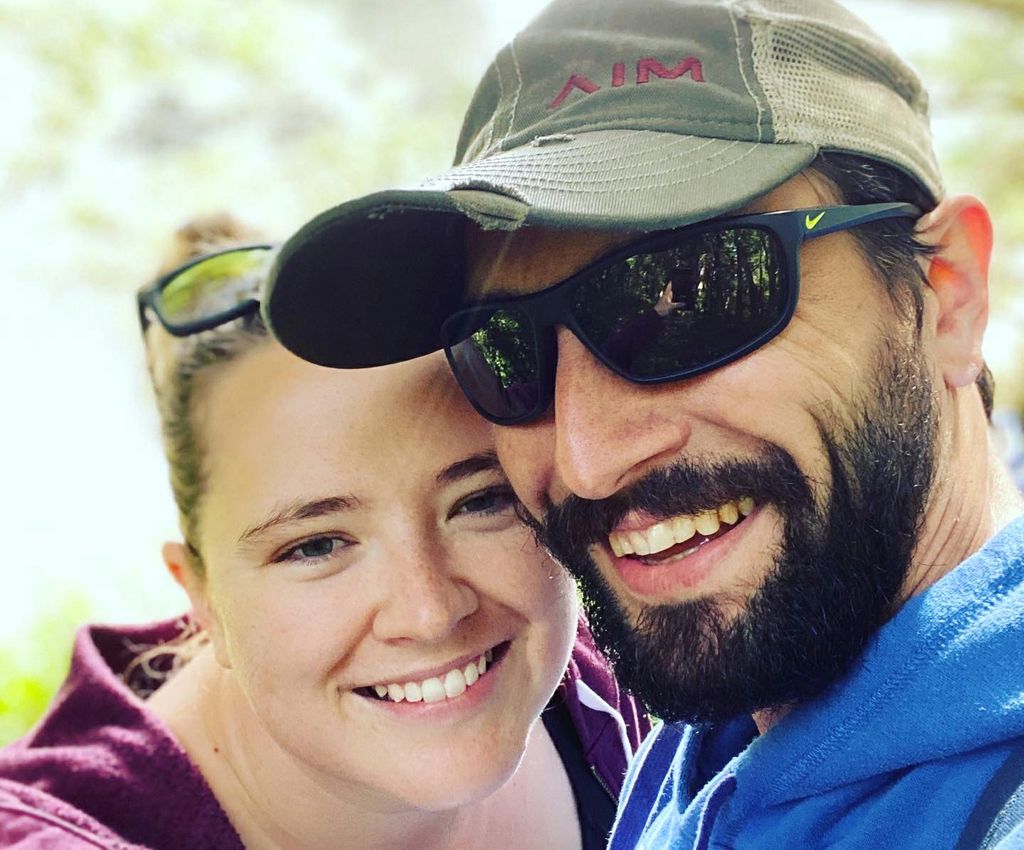 Catherine Adams and her fiance stood in the street with neighbors until alerted that the fire had jumped across Oregon 99, then rushed to evacuate their newly completed home. (Catherine Adams)

Adams’ fiancé took the oldest son, 13, and unhitched a large cargo trailer. He crossed police lines to the trailer park across the highway where his co-worker had been unable to get his trailer out.

“He rapidly hooked up his coworker’s home to the truck as flames began to engulf the trailers and mobile homes on the outer edges of the park,” Adams said. “It grew hotter and hotter and embers began to fall from the sky; one landed on our eldest’s face and left a small blistering burn near the corner of his eye.”

They made it out with the mobile home in tow. 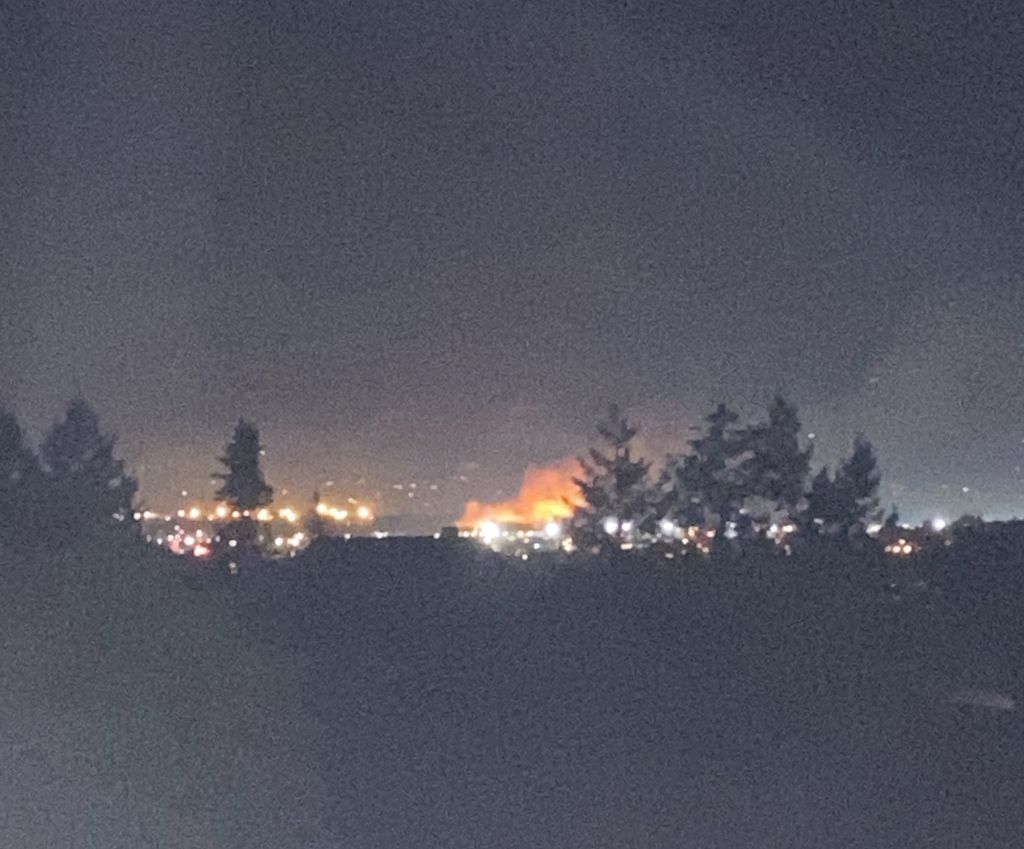 Fires along the Bear Creek Greenway as seen from Adams' parents house, where they sought safety, about 5 miles away. (Catherine Adams)

Gathering at her parents’ Medford home, under a level 2 evacuation alert from the Obenchain fire, they listened all night to the police scanner. They heard firefighters desperately asking for help only to be told there were no available resources. They were told, “Let it burn.”

“We heard firefighters ask for chainsaws to help down the large ancient trees that lined the streets in Talent, trees that I had enjoyed and marveled at so many times in my afternoon walks with my dog,” Adams said. “We heard of police officers making contact with homeowners who refused to leave their beloved homes, even as the tongues of the flames licked the siding of the house.”

The next morning, they scoured the internet looking for information. They saw photos of entire neighborhoods flattened, businesses scorched, and lives torn apart. That afternoon, Adams and her fiancé drove back roads to Phoenix, 35 miles north of the California border, to see for themselves.

“We finally came to our Barnum Drive,” she said. “We could see in every direction for at least half a mile. Every house in my beloved, quiet neighborhood was burned to the foundation, beyond recognition.”

Adams knew the situation was dire, but until they could see the rubble with their own eyes, she said they could not believe that they had lost everything. 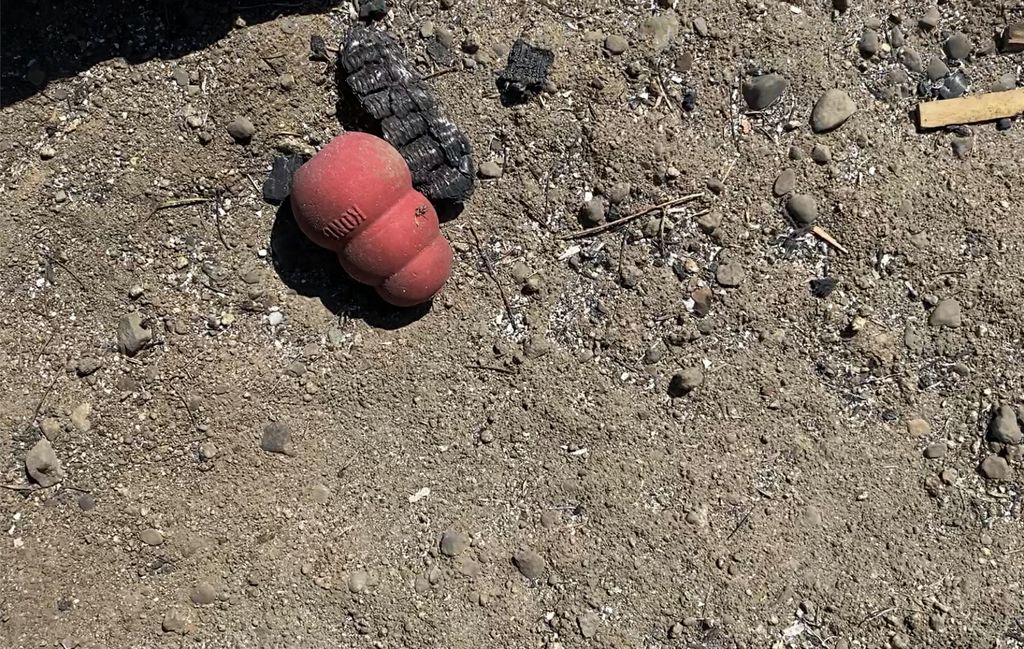 Unable to believe they had lost everything, Catherine and her fiance went back to see what was left. The devastation was complete, all except for their dog's Kong toy. (Catherine Adams)

“When we finally found our home amidst the devastation, it was nearly impossible to identify what items the ash and rubble used to be,” she said. “I found only one item totally unscathed hidden in the back yard, it was my dog’s rubber chew toy.”

Adams is one of six School of Nursing students who lost their homes – five from the Ashland campus and one from the Monmouth campus.

The OHSU School of Nursing set up an emergency fund; all donations will go directly to the students and their families. Adams said monetary donations and gift cards are the most helpful, since families lack space for donated supplies.

“For my family, when people ask how they can support us, I ask them first for prayer and encouraging words and second for gift cards,” she said. “I’ve been out of work for two weeks due to the fire and getting sick right after. I’m worried about being able to afford groceries for my kids. Gift cards are a wonderful way to provide financial support.”