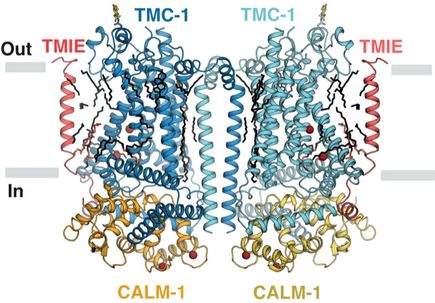 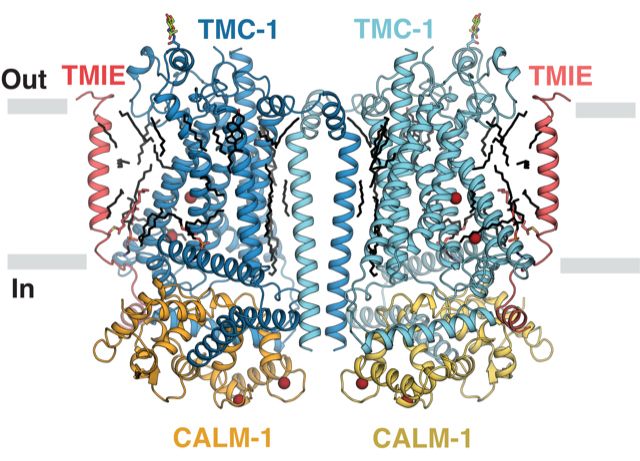 In a discovery published today in the journal Nature, OHSU scientists used advanced imaging to reveal the molecular machinery that allows the inner ear to convert vibrations into the sensation of sound.

Scientists at Oregon Health & Science University have revealed, for the first time and in near-atomic detail, the structure of the key part of the inner ear responsible for hearing.

“This is the last sensory system in which that fundamental molecular machinery has remained unknown,” said senior author Eric Gouaux, Ph.D., senior scientist with the OHSU Vollum Institute and a Howard Hughes Medical Institute investigator. “The molecular machinery that carries out this absolutely amazing process has been unresolved for decades.”

The researchers made the discovery by teasing out the structure through years of painstaking research to isolate the process that enables the inner ear to convert vibrations into sound, known as the mechanosensory transduction complex.

The study, which revealed the structure through cryo-electron microscopy, published today in the journal Nature. The findings could point the way toward developing new treatments for hearing impairments, which affect more than 460 million people worldwide.

The discovery reveals the architecture of the inner ear complex that converts vibrations into electrical impulses that the brain translates as sound. Known as mechanosensory transduction, the process is responsible for the sensations of balance and sound.

Scientists exploited the fact that the roundworm Caenorhabditis elegans harbors a mechanosensory complex very similar to that of humans.

Resolving the basic structure is the first step, according to Gouaux.

“It immediately suggests mechanisms by which one might be able to compensate for those deficits,” Gouaux said. “If a mutation gives rise to a defect in the transduction channel that causes hearing loss, it’s possible to design a molecule that fits into that space and rescues the defect. Or it may mean we can strengthen interactions that have been weakened.”

Hearing loss can be inherited through gene mutations that alter the proteins comprising the mechanosensory transduction complex. Or it can occur from damage, including sustained exposure to loud noise. In either case, OHSU researchers’ discovery allows scientists to visualize the complex for the first time.

The finding is an extraordinary achievement, said one leading neuroscience researcher at OHSU who was not directly involved in the research.

“The auditory neuroscience field has been waiting for these results for decades, and now that they are right here -- we are ecstatic,” said Peter Barr-Gillespie, Ph.D., an OHSU research scientist and national leader in hearing research. “The results from this paper immediately suggest new avenues of research, and so will invigorate the field for years to come.”

“We spent several years optimizing worm-growth and protein-isolation methods, and had many ‘rock-bottom’ moments when we considered giving up,” co-first author Sarah Clark, Ph.D., a postdoctoral fellow in the Gouaux lab, wrote in a research brief published by Nature.

Hanbin Jeong, Ph.D., a postdoc fellow in the Gouaux lab, is co-first author with Clark. Co-authors included April Goehring, Ph.D., senior research associate in the Gouaux lab; and, Sepehr Dehghani-Ghahnaviyeh, Ali Rasouli, and Emad Tajkhorshid of the University of Illinois at Urbana-Champaign.

Acknowledgements: Initial cryoEM grids were screened at the Pacific Northwest Cryo-EM Center, or PNCC, which is supported by NIH grant U24GM129547 and performed at the PNCC at OHSU, accessed through EMSL (grid.436923.9), a DOE Office of Science User Facility sponsored by the Office of Biological and Environmental Research. The large single-particle cryo-EM dataset was collected at the Janelia Research Campus of the Howard Hughes Medical Institute, or HHMI. The OHSU Proteomics Shared Resource is partially supported by NIH core grants P30EY010572 and P30CA069533. This work was supported by NIH grant 1F32DC017894 to S.C. E.G. is an investigator of the HHMI. The simulations were supported by the NIH grants, P41-GM104601 and R01-GM123455 to E.T. Simulations were performed using allocations on Anton at Pittsburgh Supercomputing Center (award MCB100017P to E.T.), and XSEDE resources provided by the National Science Foundation Supercomputing Centers (XSEDE grant number MCA06N060 to E.T.).