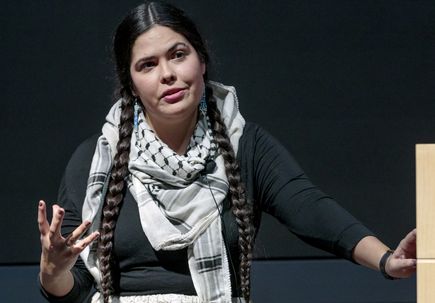 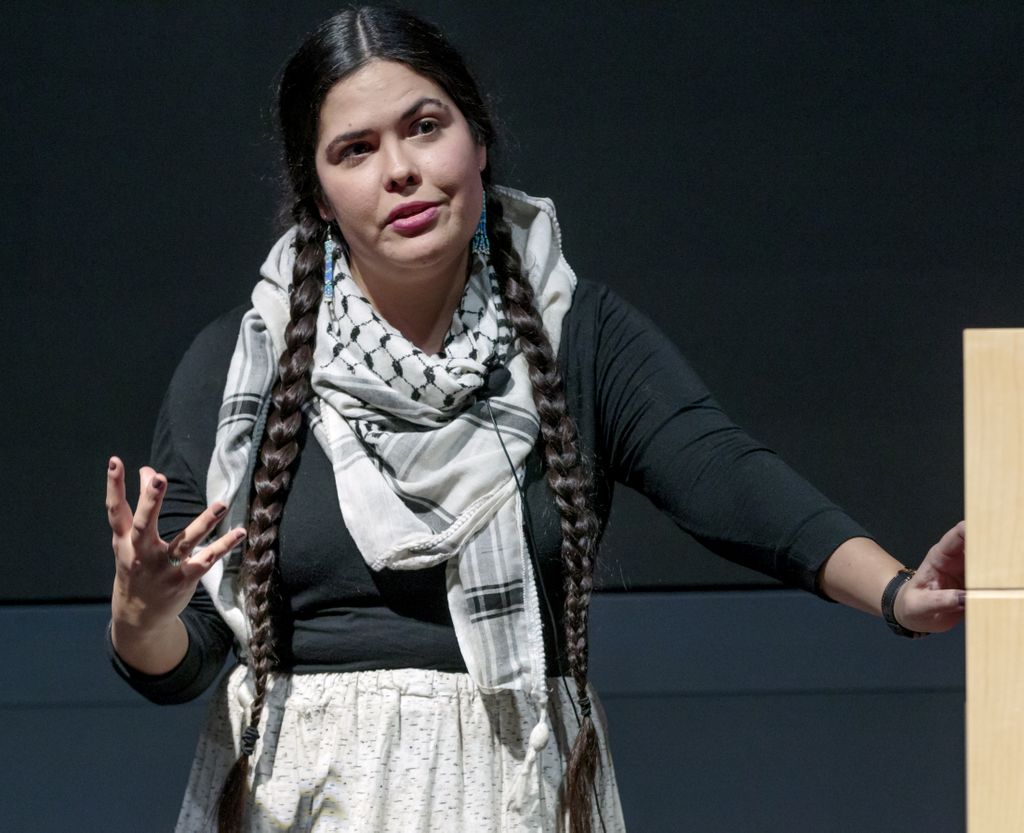 Tribal attorney and climate activist Tara Houska, J.D., broke down the urgency of restoring the health of our climate during her recent OHSU lecture “Climate, Identity, and Our Health: Indigenous Lessons and Voice from the Front Lines to Prevent Climate Collapse.”

“We drink water,” she said.

“Climate science is depressing. It’s hard to hold,” she said. “We want to keep pushing it out but climate change is happening. Australia is on fire; California is on fire; the rain forests are on fire. The climate is our health. One goes with the other.”

Houska is Couchiching First Nation, born and raised in International Falls, Minnesota. She is the former campaign director of Honor the Earth and co-founder of Not Your Mascots, a non-profit that educates the public about the harms of stereotyping and promotes positive representation of Native Americans. (Read her Feb. 1, 2020, The New York Times opinion piece on the Super Bowl, written during her visit to Portland, which also included conversations with students, faculty, public officials and community members.)

She is the former adviser on Native American Affairs to U.S. Sen. Bernie Sanders. She was on the frontlines of the Dakota Access Pipeline protest in North Dakota, is on the frontlines in Minnesota against Enbridge's Line 3 tar sands pipeline and has played a lead role in convincing major banks to divest from pipeline ventures. 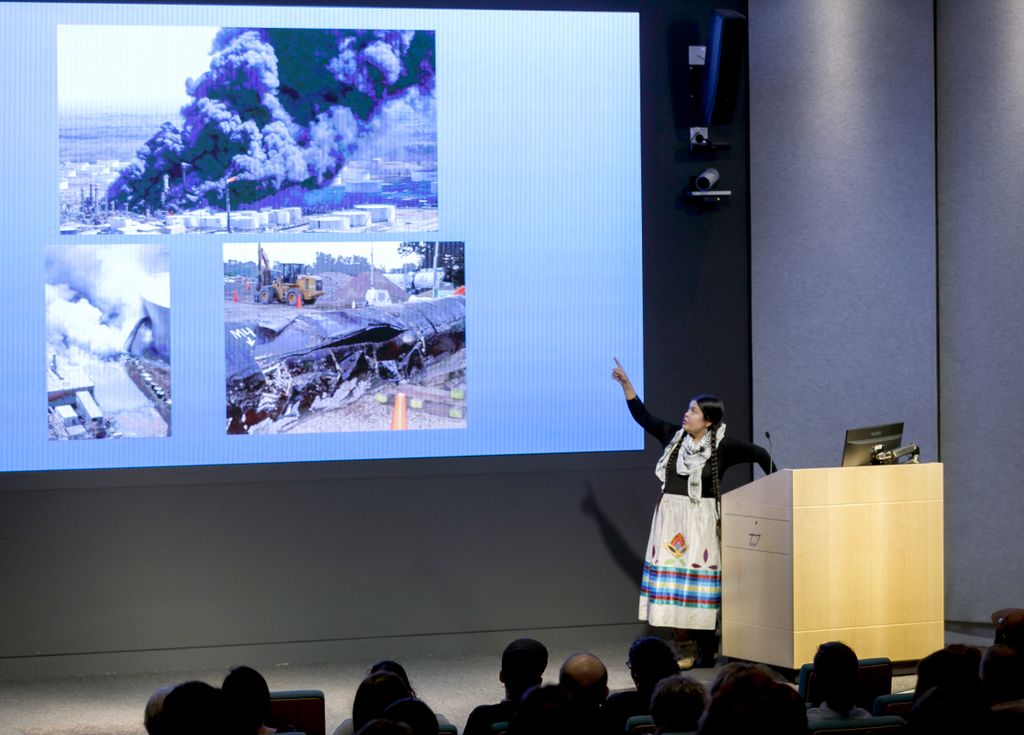 “I chose fighting for Mother Earth because she IS everything. The land is the people; the people are the land,” said Houska. (OHSU/Kristyna Wentz-Graff)

Her talk at the OHSU Knight Cancer Research Building Auditorium was part of the Seminars in Native American Health, hosted by the OHSU Northwest Native American Center of Excellence. A partnership between OHSU, PSU and the Northwest Portland Area Indian Health Board, the center is dedicated to expanding Native voice and presence in the health professions.

Houska channeled her ancestors to reframe the narrative about climate health. Indigenous people remain a vital force and must have a seat at the table, she said. Yet to influence decision making, indigenous values must also be embraced and advanced by others.

This, she said, requires recognizing and challenging the western, capitalist ways of extraction, consumption and individualism with Native ways of interconnectedness and stewardship of resources.

“We need to be with the land that we talk about, be with the food that we know, experience the things we care about,” she said. “We are not going to solar-panel our way out of environmental disaster.”

Houska talked about the comforts that we have become so accustomed to that shield us from the harms – the misters that keep shoppers cool at Phoenix, Arizona, malls, despite a water shortage. Enacting laws to protect our environment requires “decolonizing” our perspective and shifting the stories we tell and the facts we share with our children, she said.

“The knowledge over on this other side – this really beautiful, full side – is so powerful that you’ve just got to keep going back,” she said. 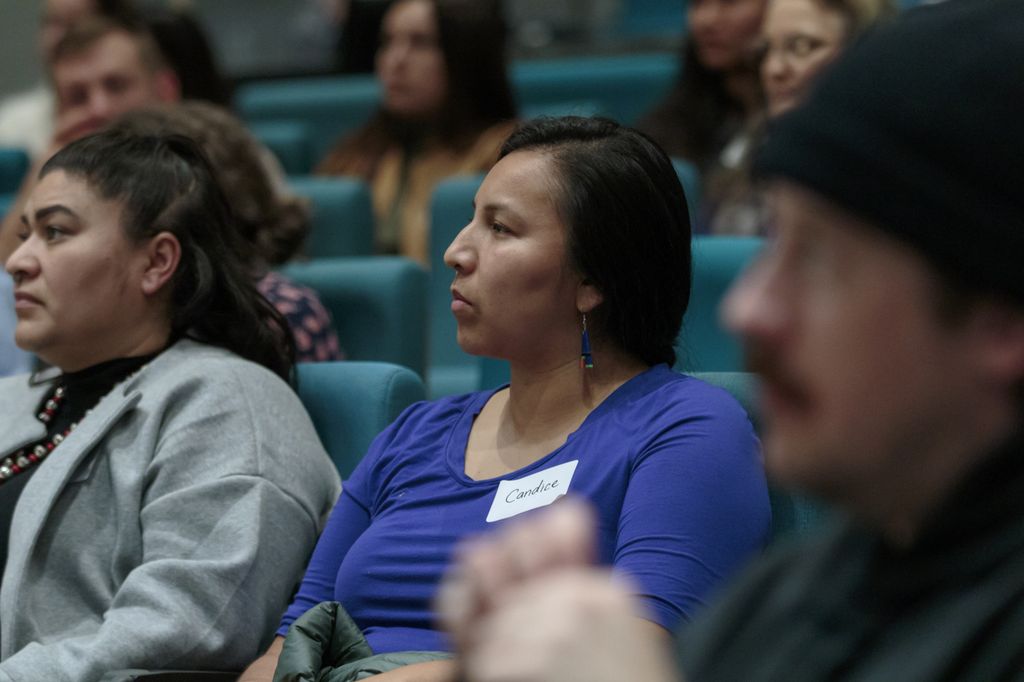 Houska lauded the scholars in the audience that night who are members of the Wy’East Post-baccalaureate Pathway for changing the narrative in medicine. (OHSU/Kristyna Wentz-Graff)

Houska lauded the scholars in the audience that night who are members of the Wy’East Post-baccalaureate Pathway for changing the narrative in medicine. Created by the Northwest Native American Center of Excellence, the pathway prepares American Indian and Alaska Native students, already on a health professions path, to succeed in medical school, granting conditional acceptance at OHSU for those how complete the requirements.

“Congratulations to all of you,” she told the scholars. “You’re so badass!”

In fighting for environmental justice – or any kind of justice – she emphasized the importance of using a diversity of tactics and developing the ability to sit down with those who hold power, earn their respect and share your knowledge with them. She spoke of sitting across gleaming board room tables, speaking truthfully about the harms of the fossil fuel pipelines to bankers who came to understand and opted to divest.

She closed by encouraging each member of the audience to consider their gifts and use them for good.

“I chose fighting for Mother Earth because she IS everything. The land is the people; the people are the land,” she said. “Whatever your heart and talents are, they aren’t just for you; they are for everybody. Find that calling and work with it.”