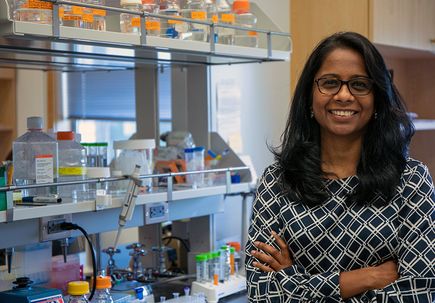 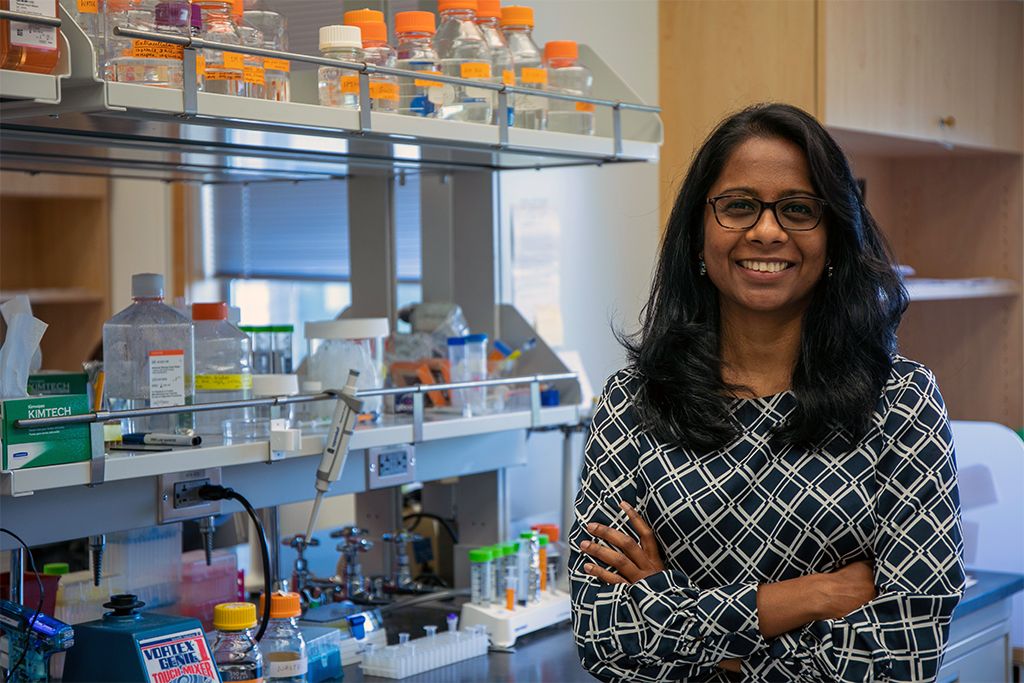 A molecular neuroscientist from Oregon Health & Science University will receive a big financial boost to develop leading-edge tools to discover the molecular basis of touch and hearing.

“I’m excited to begin producing data,” she said. “This award will tap into a strong multidisciplinary group of scientific colleagues at OHSU with great expertise in structural biology, electrophysiology and chemical physiology.”

The award will support the purchase of equipment along with the time of postdoctoral scientists and research assistants who will advance the work, Murthy said.

Murthy will explore the physiology of mechanotransduction, or the conversion of mechanical force into biological signals. Sound waves, wind on skin, blood moving through vessels – these are all force-inducing stimuli that initiate a cascade of events leading to a person’s ability to hear, sense touch or regulate blood pressure.

On Monday, Murthy’s postdoctoral adviser, Ardem Patapoutian, Ph.D., earned the Nobel Prize in Physiology or Medicine. Murthy worked as a research associate in Patapoutian’s lab at Scripps Research in La Jolla, California, from 2012 to 2019, when she left to establish her own lab at OHSU.

Murthy is specifically focused on mechanically activated ion channels, which are crucial components of mechanotransduction.

Understanding these channels may unlock answers – and potential treatments – for a wide range of maladies, including chronic pain, atherosclerosis or even sensitized pain caused by chemotherapy drugs used in cancer treatments.

Mechanotransduction goes far beyond a person’s simply feeling a sense of touch, but is integral to a wide array of physiological functions in the body. For instance, the stretching of the digestive tract driving the feeling of satiation and digestion is one example.

“There are a lot of different processes in our body that depend on conversion of force into a biological signal,” Murthy said. “If you understand how this molecule works, then it becomes much easier to understand some of these very basic physiological processes.”

Peter Barr-Gillespie, Ph.D., OHSU chief research officer and executive vice president, maintains an active research program and is a national leader in research involving the molecular mechanisms that enable our sense of hearing.

“I am thrilled that Swetha was awarded an NIH New Innovator award,” Barr-Gillespie said.

“These awards recognize exceptional creativity among relatively new investigators and are highly prestigious. Funding from the award will enable Swetha to more rapidly build her research program on mechanotransduction – indeed, my own personal area of scientific interest – and carry out unique and innovative experiments.

“The NIH’s award recognizes what we already know: Swetha is an outstanding new investigator who will excel in her scientific career.”

Because so little is known about how mechanotransduction works at a cellular level, especially in the development of more rigorous and quantitative methods to study it, Murthy’s line of research could be transformational for the field, said Marc Freeman, Ph.D., director of the Vollum Institute.

Murthy is among an elite group of scientists recognized by the NIH, he said.

“Swetha is developing an exciting number of innovative approaches to studying mechanotransduction,” Freeman said. “This work will much more efficiently characterize ion channels that allow our bodies to sense mechanical force and turn that into information our bodies can use to drive cellular and tissue functions.

“There’s a huge opportunity for growth and discovery here,” he added. “We are excited that Swetha is developing into a leader in this area.”

Despite their known importance in basic human physiology, the exact mechanism of activation of most mechanically activated ion channels have yet to be revealed. Murthy intends to use light-activated lipids to apply mechanical stress on the membrane and open the channel, enabling researchers to activate them with more precision and capture them in different conformations. This should open the way for much more efficient drug development.

“My hope would be to develop and apply this new technique to gain a better perspective on how these channels function at a cellular level,” she said. “That will then open the way to developing drugs that could selectively block the channel.”

This work is supported by grant award R01MD017405, funded by the NIH Common Fund.

Earlier this year, Murthy was also one of two visionary OHSU researchers to receive a $750,000 award through OHSU’s Silver Family Innovation Fund.