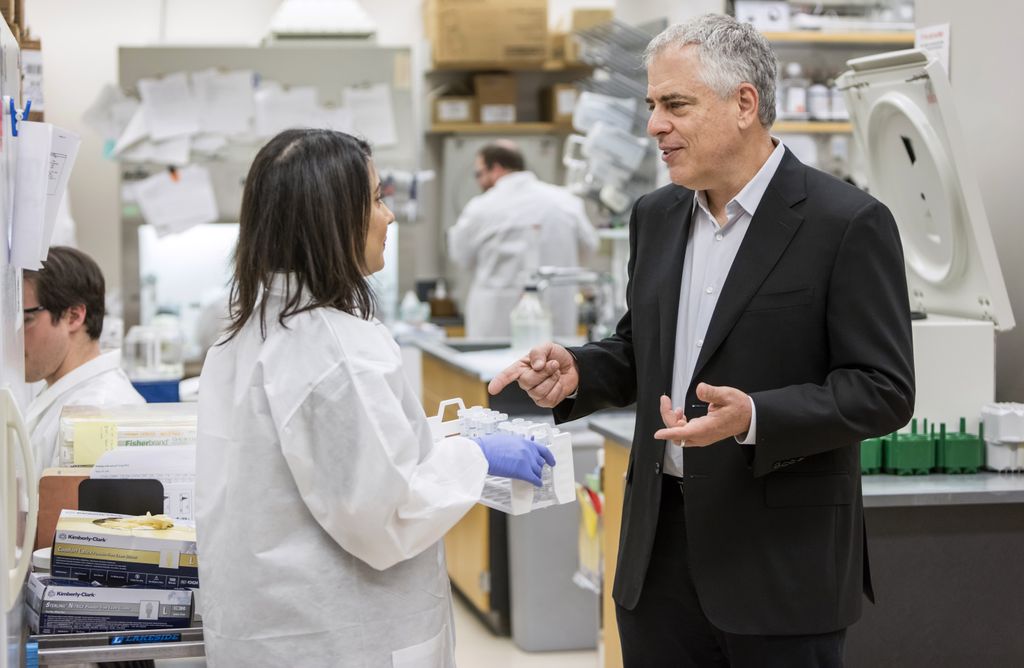 The vaccine platform is the brainchild of a team of scientists at the OHSU Vaccine and Gene Therapy Institute, or VGTI, including Jay Nelson, Ph.D.; Klaus Frueh, Ph.D.; Scott Hansen, Ph.D.; and Louis J. Picker, M.D. The acquisition, which includes a merger with the OHSU startup TomegaVax Inc., is a critical step in translating a basic science concept pioneered at OHSU into a portfolio of commercial vaccines that have the potential to protect against and cure some of the world’s deadliest infectious diseases, including HIV, malaria, hepatitis B, papillomavirus and tuberculosis.

The vaccine platform is based on a unique model that uses the common herpes virus cytomegalovirus, or CMV, as the viral vaccine vector to deliver a knock-out blow to the various pathogens.

"Basic scientists rarely get to see our work turned into practice,” says Picker. “But this vaccine platform has the real potential to fight the world’s deadliest diseases. There is no other vaccine like it, and we’re thrilled that this prominent group of industry leaders has recognized it and given our vaccine platform such a strong vote of confidence.”

Picker’s team made international headlines in 2013 when they published findings in the prestigious journal Nature that showed their HIV vaccine not only controlled SIV, the nonhuman primate form of HIV, but cleared it in the majority of nonhuman primates. The HIV vaccine has shown such promise in pre-clinical trials that it is headed to Phase 1 human clinical trials next year.

“Vir Biotechnology will allow us to accelerate the clinical testing of novel vaccine concepts developed at OHSU which we hope will result in new preventive measures and cures for infectious diseases,” said Frueh. “In its most simple terms, Vir is going to become our commercial research and development partner to move the vaccines to people.”

Research at VGTI was first made possible through a state-funded Oregon Opportunity Grant. The research has since been funded primarily through grants from the National Institutes of Health’s National Institute of Allergy and Infectious Disease, and the Bill & Melinda Gates Foundation, which has committed $46 million in grants to support Picker’s work at VGTI.

“As Oregon’s only public academic medical center, it gives us great pleasure when OHSU discoveries lead to marketplace innovations and industry collaborations that benefit the citizens of Oregon and the global community,” said Daniel M. Dorsa, Ph.D., OHSU senior vice president for research. “This work also could not have been possible without the initial Oregon Opportunity Grant created by the Oregon Legislature.”

Both Picker and Frueh will serve as scientific advisors to Vir, and Frueh will serve on the Vir board of directors. As part of the acquisition, OHSU holds equity in Vir, which is expected to announce an initial public offering within the next few years should the vaccines prove successful in human clinical trials. Frueh, Picker and colleagues will continue their basic science research at OHSU, with the goal of fine-tuning the vaccine technology in their pre-clinical work.

Vir is adopting a broad technological portfolio, including the viral vectors obtained through the acquisition of TomegaVax, Inc. to create cures and treatments for emerging diseases, deadly viruses and drug-resistant bacteria using immune programming. ARCH Venture Partners, whose co-founder Robert Nelsen conceived and led the formation of Vir, has committed to invest up to $150 million.

In the interest of ensuring the integrity of our research and as part of our commitment to public transparency, OHSU actively regulates, tracks and manages relationships that our researchers may hold with entities outside of OHSU.  Review details of OHSU's conflict of interest program to find out more about how we manage these business relationships.

(Left to right) Sjoerd Van Den Worm, Wilma Perez and Geoffrey Diemer, the team of scientists at the Vaccine and Gene Therapy Institute who are generating the CMV-based HIV vaccine for clinical testing. (OHSU)