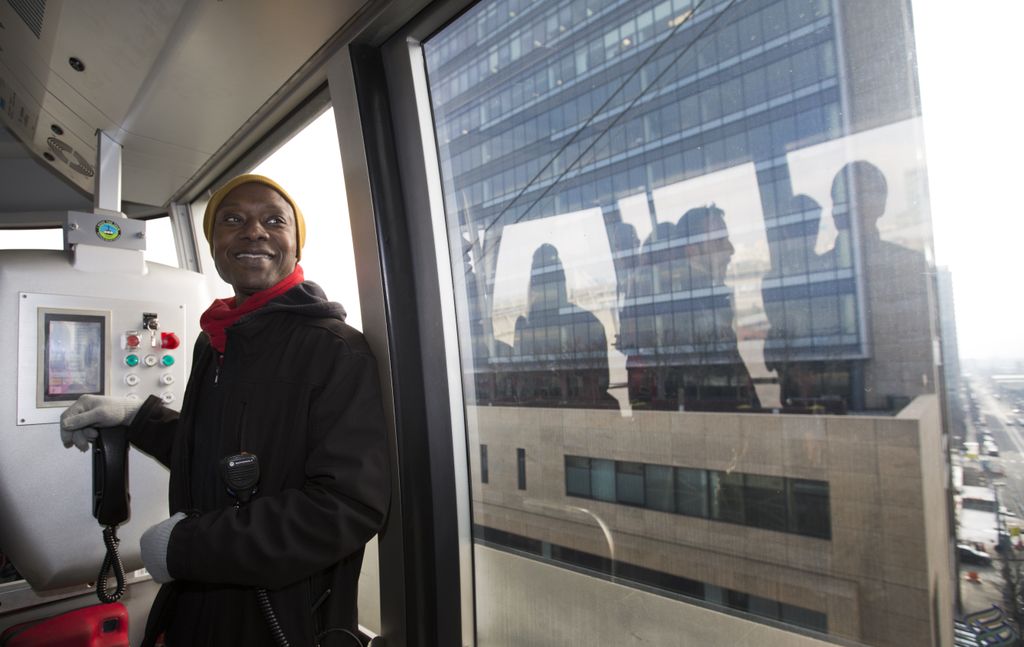 “My favorite thing is the contact with the people. That’s the best part of the job,” says Stephane Diouf, a cabin attendant for the Portland Aerial Tram.

He smiles on a recent morning as the Tram cabin begins to climb, ferrying passengers between Marquam Hill and the South Waterfront, just one of a hundred runs he will make on this day.

This weekend marks the 10th anniversary of Portland Aerial Tram. A series of events have been held throughout the week and will conclude with a free Community Day Celebration Saturday, Jan. 28, featuring historical displays, family activities, guided walks and more. 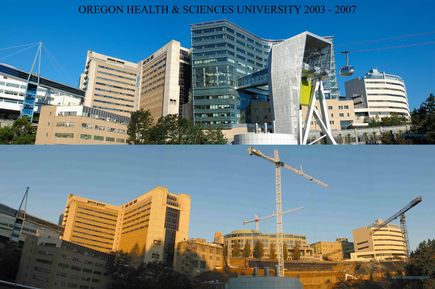 Comparison of Marquam Hill buildings showing site before construction of tram tower and after between 2003 and 2007. (OHSU LIBRARY/Cyril "Kent" Anderson)

Since the Tram opened in January 2007, it has provided more than 16 million trips, with about 9,000 people riding on an average weekday. The tram allowed OHSU to expand to the South Waterfront, a previously underused brownfield industrial site which was difficult to access. Having rapid and reliable transportation to the riverfront made it possible for OHSU to add more than 4,000 jobs and invest more than $1 billion in new buildings to create a world-class bioscience education hub.

As a Tram operator, Diouf knows how essential a role the public conveyance plays in the operations at OHSU. Each morning he walks three miles to work and arrives at 4:30 a.m., knowing that hundreds of people depend on the Tram to be up and running promptly at 5:30 a.m.

The morning runs are quieter, filled with many commuting regulars. The afternoons tend to bring a larger variety of folks, as the Tram has grown to be a popular destination for tourists.

“You meet so many people from all over the world,” says Diouf, 62, reflecting on the six years he has been working for the Tram.

A particularly cute 5-year-old boy once referred to the Tram as the “sky bus.” There are endless requests to identify the mountains and high rises, and countless rounds of "Happy Birthday."

And even a few weddings.

Both times Diouf had weddings aboard his cabin, the bride and groom showed up unannounced in their wedding clothes, he says.

The ceremonies were performed during the four-minute Tram ride, with other passengers surrounding them.

“Everyone was listening to the vows, but it was very short.”

Previous Story Doernbecher Freestyle: 13 years of kicks, more than $16.5 million raised Next Story Keeping the roads to OHSU open is a year-round endeavor

Stephane Diouf, cabin attendant on the Portland Aerial Tram, helps passengers board the tram at the lower terminal, January 24, 2017. Each of the cabins can hold 79 passengers. (OHSU/Kristyna Wentz-Graff)

Stephane Diouf, cabin attendant on the Portland Aerial Tram, helps passengers board the tram at the upper terminal, January 24, 2017. Each of the cabins can hold 79 passengers. (OHSU/Kristyna Wentz-Graff)

Stephane Diouf, cabin attendant on the Portland Aerial Tram, helps passengers board the tram, January 24, 2017. Each of the cabins can hold 79 passengers. (OHSU/Kristyna Wentz-Graff)

Comparison of Marquam Hill buildings showing site before construction of tram tower and after between 2003 and 2007. (OHSU LIBRARY/Cyril "Kent" Anderson)

Painters work on the middle tower of the Portland Aerial Tram, 2006. (OHSU)