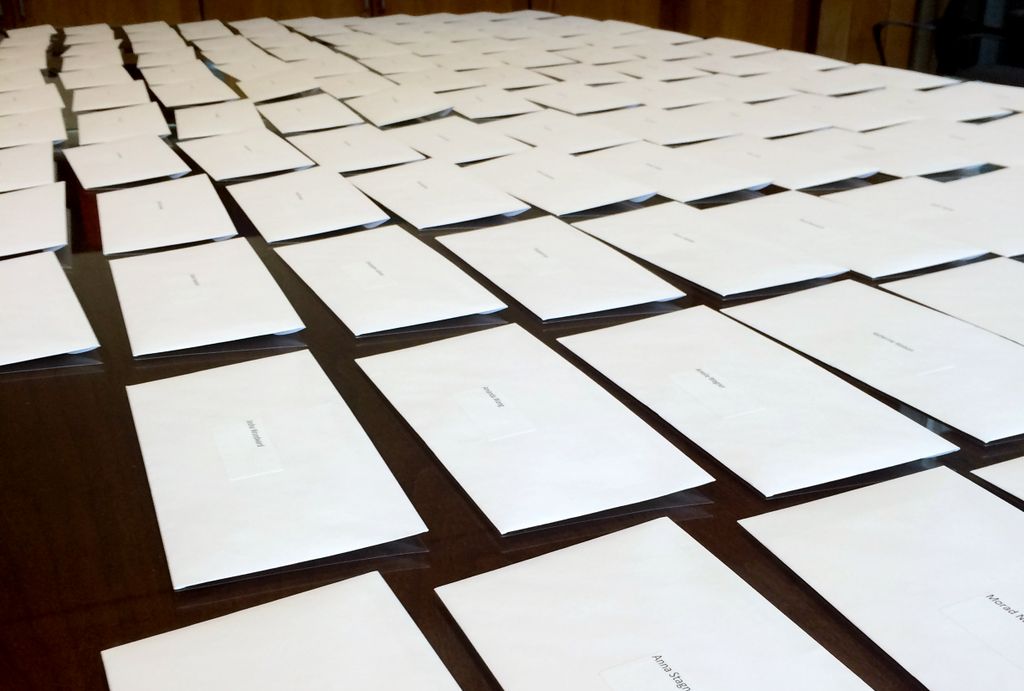 A sophisticated computer algorithm matches students to residency programs based on their application, interview and program preferences, as well as the student preferences of the residency program to which they’ve applied. The residency match is revealed to students on "Match Day" which takes place simultaneously at all medical schools across the country. (OHSU/Tracy Brawley)

At exactly 9 a.m. Friday, March 17, the OHSU School of Medicine class of 2017 – more than 100 eager future physicians -- will flood the Collaborative Life Sciences Building on Portland’s South Waterfront to learn where they will spend the next three to seven years of residency training.

Match Day is a highly anticipated annual event in which the results from the National Resident Matching Program are released simultaneously to thousands of medical students across the country.

The students’ residency destinations are determined by a sophisticated computer algorithm, which matches them to graduate medical education, or residency, programs based on their application, interview and program preferences, as well as student preferences.

Through this tried-and-true system, more than 79 percent of medical students are accepted to one of their top three choices, and approximately 50 percent are matched to their first choice, according to the National Resident Matching Program. These soon-to-be clinicians will play an integral role in the evolving health care delivery system in Oregon and across the nation

“Packed with uncertainty, anticipation, courage and jubilation, Match Day is a defining moment in every physician’s journey,” said John Hunter, M.D., F.A.C.S., F.R.C.S. Edin(hon), interim dean, OHSU School of Medicine.  “OHSU faculty are proud to be a part of this milestone, and are eager to see how these talented students positively impact the world of medicine.”

Following are members of the OHSU School of Medicine class of 2017 who are participating in this year’s Match Day ceremony.

For news media: OHSU School of Medicine Match Day events will begin at 8:30 a.m. Friday, March 17, 2017, at the Collaborative Life Sciences Building on Portland’s South Waterfront. Media planning to attend should gather in the first-floor atrium no later than 8:30 a.m. 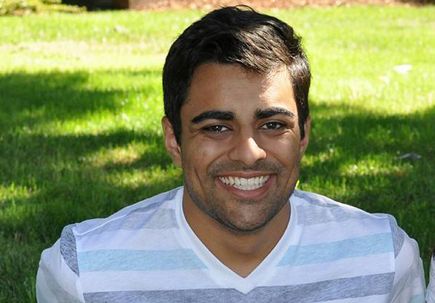 Because so much time is spent caring for patients, conducting procedures, and applying didactic lessons, the final year of medical school is all about “learning to learn,” said Ishan Patel, a native of Redmond, Oregon.

Patel’s path to medical school began at Oregon State University where he studied bioengineering. During the summers, he worked as an intern on a model to simulate pressure drive bleeding in the lab of Owen McCarty, Ph.D., professor and interim chair of biomedical engineering in the OHSU School of Medicine.

“There’s something very special about OHSU in that there are so many good clinicians who are also educators,” said Patel. “They are receptive to having learners around and it makes everybody a well-rounded student.”

As class president for four years, Patel helped lead numerous activities for the OHSU M.D. Class of 2017, from organizing interest group activities to planting a tree on campus in remembrance of an exceptionally influential patient.

A family oriented individual, Patel hopes to remain in the Portland area for his internal medicine residency training. This will allow him to remain geographically close to family and his partner. Following residency, Patel is considering a move back to central Oregon to pursue a pulmonary critical care practice. 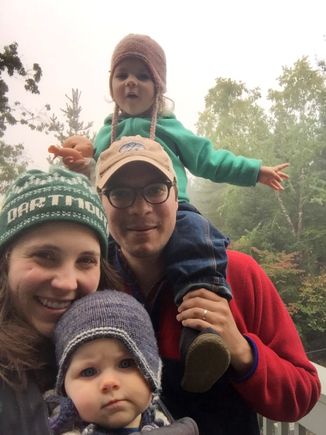 On Match Day, Anfin Erickson and his family will learn where they will live for the next few years as Erickson pursues a surgical residency position. (OHSU)

Anfin Erickson grew up biking distance from the town of Whitefish, Montana, where he spent his free time trout fishing, skiing, hiking and rock climbing.

While his connection to nature drove him to pursue a philosophy major at Dartmouth College, it was his love of rural communities that eventually turned him toward the path of medicine, following in the footsteps of his father, a physician, and his mother, a nurse practitioner.

Erickson chose surgery as his specialty. In the operating room, he found the sense of accomplishment and tangible results that he experienced working with his hands as a teen – tying flies, building furniture and mowing lawns. For him, surgery allows for a broad base of knowledge and general curiosity within a specialty focus, and it will allow him to play a vital role in a small community much like his hometown.

“Surgical care is the backbone of these critical-access hospitals. Whether they have a surgeon is what keeps them running,” Erickson said. “Historically there has been drastic shortages in surgical care in rural communities. The chance to fill that need definitely motivates me.”

The opportunity to work in the rural community of Heppner, Oregon, during his OHSU M.D. training sealed the deal, with Erickson now eager to relocate his wife, children and 90-pound Goldendoodle to a small community for surgical resident training. 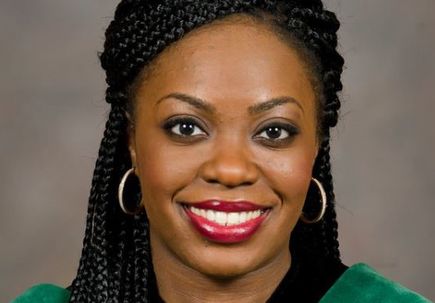 Ann Oluloro always had a knack for the sciences, the tenacity of an underdog and a passion for giving back.

She received these traits from her mother who pieced together part-time jobs to single-handedly raise Oluloro and her sister. Limited resources meant the utilization of public health clinics to obtain medical care. It was there that Oluloro first saw how disparities linked to income and race, something that not only affected her own life, but would drive her career path forward.

A Portland native, Oluloro threw herself into Madison High School’s Health Occupations program, seizing opportunities to work in the community. Upon the receipt of a Gates Millennium Scholarship, which covers tuition all the way through graduate school, she enrolled in the Robert D. Clark Honors College at the University of Oregon where she excelled in completing a double major in biochemistry and biology.

Oluloro was accepted at five medical schools, but chose to return to her hometown to study at OHSU. Working with her faculty mentors and OHSU Center for Diversity and Inclusion, Oluloro embraced a role in the recruitment and retention of under-represented students like herself. “It is one of my greatest joys of being at OHSU,” she said. “The institution is making strides toward the diversity needed to treat a heterogeneous population. I’m really excited for the change that is coming to OHSU.”

Weaving together medicine with the social determinants of health she witnessed as a child, Oluloro will graduate this June with both a medical degree and a master’s degree in public health. Now she takes her next step toward residency training in obstetrics and gynecology, with the ultimate goal of, one day, practicing gynecological oncology. 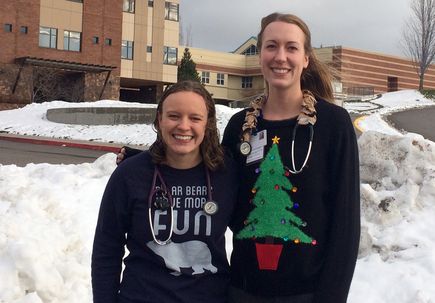 Aspiring doctors Lisa Pearson and Rita Aulie have spent much of their fourth year of medical school at the Cascades East Family Medicine Residency Program in Klamath Falls as part of the Oregon Family Medicine Integrated Rural Student Training program.

As Oregon FIRST students, Pearson and Aulie rotate through inpatient medicine, ambulatory practices and elective specialties at Sky Lakes Medical Center and spend one day a week in clinic seeing their own patients.

“It’s very rewarding to have our own patients, be responsible for their care and see them for follow-ups over a period of several months,” Pearson said. “Building long-term relationships with patients is one aspect that draws me to family medicine.”

Aulie chose family medicine after majoring in biochemistry at University of Oregon and shadowing a family practice doctor in Eugene, Oregon. A second job shadow with a family physician in Burns, Oregon, cemented her commitment to a rural setting.

“I grew up in Redmond [Oregon],” Aulie said. “I knew there was a shortage of family doctors. It was pretty clear to me that that if rural family medicine doctors are what we need, that is what I should do.”

Pearson, who donned a toy stethoscope for career day at her Spokane, Washington, preschool, was also influenced by rural experiences – in her case, during rotations in Scappoose and Enterprise, Oregon with family doctors.

“Family doctors get to do a lot of cool things in rural areas,” she said. “There’s a wider scope of practice outside the city.”

Due to their involvement in Oregon FIRST, which was launched in 2014-15 to build the pipeline of rural physicians serving the state, there is a high likelihood that  Pearson and Aulie will remain in Klamath Falls to complete their residencies. The program offers financial incentives – such as forgoing the cost of interviewing for a residency program – in exchange for residency service.

On Match Day, Anfin Erickson and his family will learn where they will live for the next few years as Erickson pursues a surgical residency position. (OHSU)

A sophisticated computer algorithm matches students to residency programs based on their application, interview and program preferences, as well as the student preferences of the residency program to which they’ve applied. The residency match is revealed to students on "Match Day" which takes place simultaneously at all medical schools across the country. Here, envelopes line a table at the 2016 Match Day. (OHSU/Tracy Brawley)