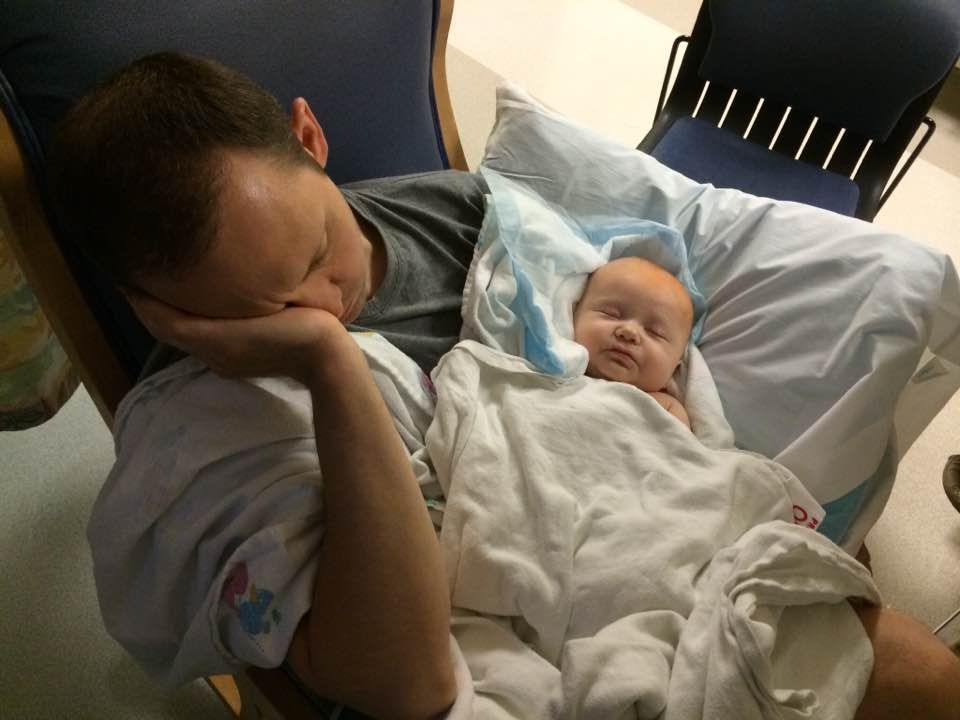 Serge Vinyarskiy cradles his son, Jake, in the hospital after Jake’s surgery for hydrocephalus in August 2014. (Vinyarskiy family photo)

Looking back, a letter that arrived in the mail one day was just the luck little Jacob Vinyarskiy needed.

His mom, Brandy Alexander, had been sick with worry. Jake had seemed fine when he was born in April 2014, despite arriving more than a month early. Alexander and her husband, Serg Vinyarskiy, took him home to join his 2-year-old brother Nicholas Vinyarskiy.

Then Jake developed jaundice and had to spend three weeks in a Portland-area hospital. The day he was supposed to go home, a nurse casually mentioned that his daily head measurements might indicate a problem.

A scan showed he had hydrocephalus, a life-threatening brain condition. Jake was rushed to another hospital in an ambulance. He was sent home but had to come back every couple of weeks for a brain scan.

“It’s like your worst nightmare,” Alexander says. “I would rather have almost any defect except a brain defect for my child.”

Alexander spent day and night scouring the internet, reading medical journals, blogs and Facebook group posts. Little was encouraging. Hydrocephalus occurs when the fluid that bathes the brain and spinal cord backs up, threatening to expand an infant’s head and damage the brain. 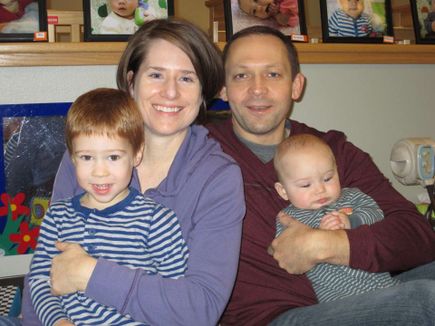 The standard treatment, implanting a shunt that pipes the fluid from the brain to the belly, saves lives but hasn’t changed much in decades. Dangerous complications are common. Alexander learned of a newer, shunt-free surgery but found that it isn’t available everywhere. Her son’s doctor couldn’t do it.

Then the letter arrived from Jake’s doctor letting the family know he was leaving pediatrics and sending Jake to yet another provider, OHSU Doernbecher Children’s Hospital. There, as it turns out, Jake would find the doctor who would change everything.

Before shunts were developed in the 1950s, hydrocephalus was usually fatal. Now, about 80 percent of children who get a shunt make it to adulthood. But shunts often malfunction, and brain surgery is the only fix. About half of shunts fail within two years, and many patients need multiple repair surgeries.

Parents have to be on constant alert for signs of shunt failure--headache, vomiting and lethargy--that are frustratingly similar to symptoms of cold, flu or stomach upset. If signs emerge, a child may have only hours to reach a hospital before irreversible brain damage occurs.

An alternative to shunts arose in the early 2000s in an unlikely place: Uganda.

Benjamin Warf, a U.S. pediatric neurosurgeon, had moved there to open a charity hospital. Hydrocephalus was rampant, but he soon saw that shunts were no solution for impoverished children who lived days from the hospital.

In essence, the surgeon guides a flexible surgical scope through a small incision in the skull and makes an opening in a brain cavity called a ventricle. This frees the fluid to flow through more of the brain and be absorbed. Then the physician treats tissue inside the ventricle to lessen the brain’s ability to make more fluid or to otherwise help restore the brain’s delicate equilibrium.

Warf showed the surgery had a high success rate. In 2006, after setting up a program to train other doctors, he returned to the U.S. to work at Boston Children’s Hospital. He would go on to win a John D. and Catherine T. MacArthur Foundation “genius grant” for his work.

In 2011, Warf took on a new pediatric neurosurgeon for a year of training at Boston Children’s. Lissa Baird, M.D., would learn ETV/CPC at his side.

In 2012, Baird was recruited to Doernbecher. She’s one in a small group of U.S. pediatric neurosurgeons who learned ETV/CPC from Warf himself. She’s also an expert in the use of a flexible neuroendoscope, the instrument used in ETV/CPC and other procedures. Her results with ETV/CPC -- about 75 percent of patients remain shunt-free -- are similar to Warf’s.

“I’m definitely a proponent of it because I believe in the data and I’ve seen it work,” says Baird, who gives presentations about the procedure to other clinicians. “I’m also a proponent of being cautious about it.”

Not every patient is a good candidate for ETV/CPC, she says, and she and parents have to closely monitor a child for the first year to make sure it worked. Some doctors remain skeptical because any effects on long-term brain development aren’t known, given the surgery’s recent development. Mastering the neuroendoscope is another hurdle.

When ETV/CPC is successful, though, parents don’t have to be “concerned every time their child throws up that their shunt could be clogged,” says Baird, 40. “It just makes a big difference down the road in what they have to go through.” 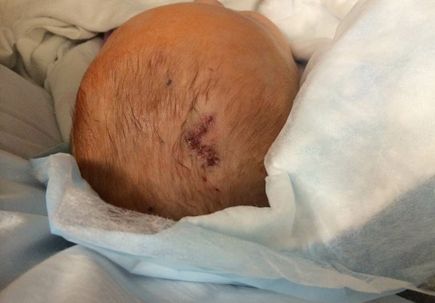 Brandy Alexander said Jake’s incision was so small it was hardly noticeable and Jake “ended up doing amazingly” after surgery. (Vinyarskiy family photo)

Baird became Jake’s doctor. At first, she agreed that Jake needed only monitoring for his hydrocephalus. But should he need surgery, she thought he was a good candidate for ETV/CPC.

Then Jake had a “really bad shaking spell” at day care, his mom says, and a brain scan showed his hydrocephalus was slowly getting worse. Surgery was set for Aug. 28, 2014.

Alexander brought Jake to Doernbecher before dawn. She was alone because Serg had to watch Nicholas until day care opened. Alexander remembers taking photos of the sunrise. A new day.

Alexander took comfort in Baird’s calm confidence. “I love Dr. Baird so much,” she says. “She has the most amazing bedside manner of any doctor I've ever met.” 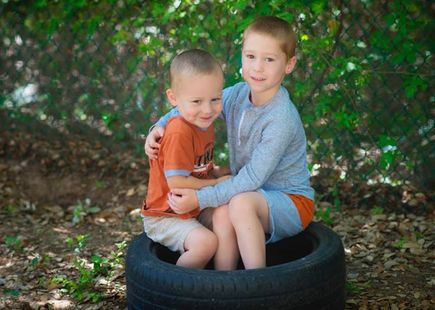 Brothers Jake, 3, and Nicholas Vinyarskiy, 5, live with their parents in Austin, Texas, where the family relocated from the Portland area. Jake, who remains shunt-free, is a “ball of fire,” his mom says. “He loves doing anything my older one does.” (Vinyarskiy family photo)

Jake’s surgery was a success. “I have this picture, four days after surgery, and he is just smiling as happy as he can be,” Alexander says. Baird also found the source of the hydrocephalus: signs of previous bleeding in Jake’s brain and the formation of scar tissue, most likely as a result of his premature birth.

Now Jake is a 3-year-old “ball of fire,” says Alexander, 39, from the family’s home in Austin, Texas, where the family has relocated. He’s a whiz with puzzles, fights with his older brother and loves to watch endless YouTube videos of the “Finger Family” song.

“If you say no to something, he’s going to do it,” his mom says.

Jake had more seizure-like episodes after surgery but outgrew them. He’s had therapy for muscle weakness in his torso and mouth. But his intellect seems fine, and he remains shunt-free. “We got lucky,” Alexander says.

Still, telling the story brings all the worry flooding back. Alexander finds herself in tears even though she told herself she wouldn't cry. She wishes she had spent less time worrying and more time enjoying Jake's early days. She remembers going online, terrified out of her wits, looking for hope.

“No one ever comes back and says it turned out OK,” she says.

So she does. She tells her story so parents know about ETV/CPC and about Dr. Lissa Baird. She tells them so they know a happy ending is possible.

Previous Story It’s all in the wrists: Using robotic surgery to cure a life-long condition Next Story Telehealth helps prevent blindness in preemies

Jake Vinyarskiy, with the family dog, has grown from a happy baby to a happy toddler since his surgery. (Vinyarskiy family photo)

Brandy Alexander and her husband, Serg Vinyarskiy, hold their sons, Nicholas Vinyarskiy (left) and Jake Vinyarskiy, when they were still living in the Portland area. (Vinyarskiy family photo)

Serge Vinyarskiy cradles his son, Jake, in the hospital after Jake’s surgery for hydrocephalus in August 2014. (Vinyarskiy family photo)

Baby Jake Vinyarskiy shows his playful side months after surgery. His mom says he’s lovably stubborn: “If you say no to something, he’s going to do it.” (Vinyarskiy family photo)

Jake Vinyarskiy, who turned 3 in April, has had some physical therapy, but his intellect seems intact, says his mom, Brandy Alexander. “The scariest thing about neurosurgery is it’s the brain and it’s so important,” Alexander says. (Vinyarskiy family photo)

Brothers Jake, 3, and Nicholas Vinyarskiy, 5, live with their parents in Austin, Texas, where the family relocated from the Portland area. Jake, who remains shunt-free, is a “ball of fire,” his mom says. “He loves doing anything my older one does.” (Vinyarskiy family photo)

Serg Vinyarskiy (from left) and his wife, Brandy Alexander, take a selfie with their sons, Nicholas and Jacob Vinyarskiy. Jacob, who goes by Jake, is thriving after surgery at OHSU Doernbecher Children’s Hospital in 2014 to treat his hydrocephalus. (Vinyarskiy family photo)

World-class expertise from every angle: A roomful of specialists meet weekly for children with brain tumors