Turning an M.D. dream into a reality 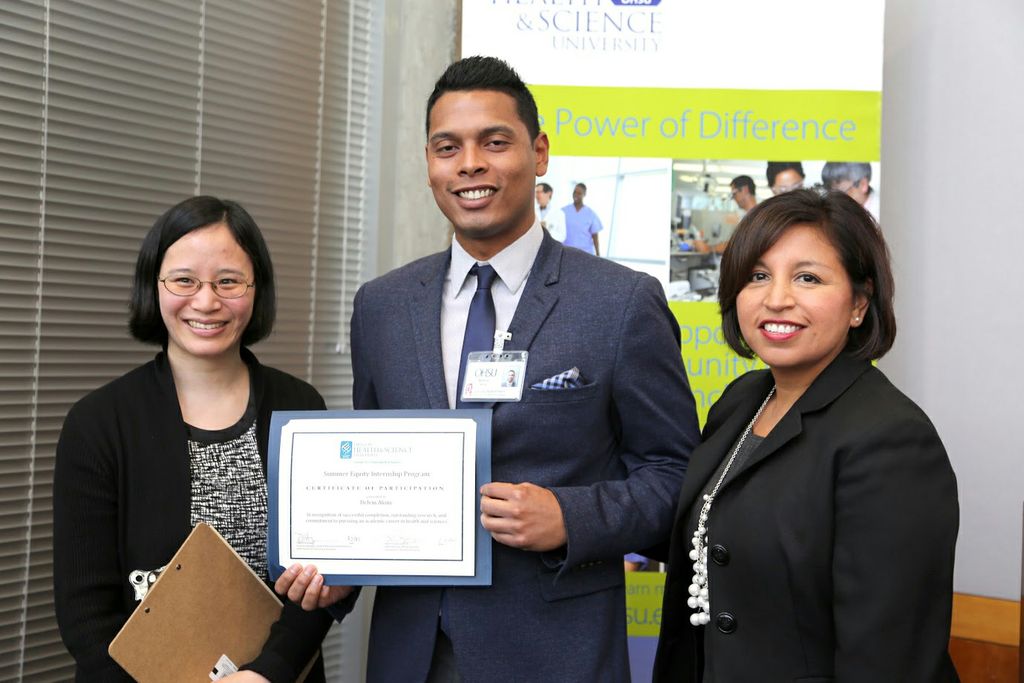 Delvin Akins has always been interested in science and medicine. Like a gravitational force, he is easily drawn to it. Despite this ongoing pull, the stress of a lower-middle-class upbringing and the lack of a strong educational role model made a medical career seem unattainable.

“Growing up, I viewed doctors similarly to professional basketball players. They were on a level of our society that didn’t seem accessible,” Akins said. “Regular access to a physician, or health care in general, was rare in my community. I didn’t have any doctors in my family or surrounding circle to look to as an example.”

Following a short stint at a community college near his hometown in Southern California, Akins joined the ranks of the U.S. Army. It was there that he obtained the structure, discipline and drive he needed to overcome distractions and take the first major step toward fulfilling his heart’s desire. As an Army medic, he served two combat tours, totaling 17 months. This time period was crucial, Akins said, to building his confidence and interest in health care.

Eventually, he began college courses at night, and after five years of study, including various leadership assignments around the country, Akins obtained his undergraduate degree.

After completing his military service, Akins and his family moved to Portland, Oregon, where he finished his science pre-requisites at Portland State University. Despite his previous experience, accomplishments and renewed determination, he hit a roadblock.

“I knew medicine was still important to me, but an M.D. program still felt foreign. I didn’t know where to go next,” Akins said.

It was at this point that Akins met Miranda Lim, M.D., Ph.D., who introduced him to the OHSU Center for Diversity and Inclusion's Equity Research Program. Designed to excite and inspire undergraduate students from economically disadvantaged, first-generation or underrepresented minority groups, the OHSU Equity Research Program offers an eight-week hands-on internship in scientific research or clinical experience. Since its inception in 2005, the program has enrolled 162 students in one of eight tracks, ranging from biomedical research to public health. The current cohort, the largest in program history, includes 24 students from 14 different states.

“As a clinician-scientist and an Equity mentor, I’m fortunate to have a number of qualified pre-med students interested in working in my lab. However, Delvin really stood out to me,” said Lim, an assistant professor affiliated with the departments of Neurology, Medicine and Behavioral Neuroscience in the OHSU School of Medicine, and the Oregon Institute of Occupational Health Sciences at OHSU; and a staff physician at the VA Portland Health Care System. “Given his maturity and unique life experiences, I knew that he would be perfect for the structured academic mentoring that the Equity internship provided. The experience would be a catalyst for his future career in health care at OHSU.”

Despite some initial hesitation fueled by uncertainty and a slight fear of rejection, Lim convinced Akins to apply, and, once he did, he was accepted.

“I was shocked, and my tone immediately changed,” Akins recalled. “I got excited and confident about participating and building my network at OHSU. Suddenly, a medical degree didn’t seem so far out of reach.” 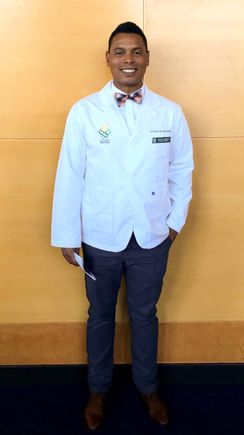 Delvin Akins at his White Coat Ceremony, 2015. The ceremony is a large moment for students, marking the start of their medical careers. (Photo courtesy of Delvin Akins)

Just two years following his Equity internship acceptance, Akins participated in the White Coat Ceremony, signifying the beginning of his training at the OHSU School of Medicine.

“If, as a kid, I would have had the examples I did during my internship, I would have pursued medicine sooner,” he said.  Regardless, he wouldn’t change the experience he gained throughout his journey. “In the military, it was instilled in me that the best leaders lead by example, and that their past experiences can serve as learning opportunities for others.”

From his personal life and military service to the “invaluable mentorship” received at OHSU, Akins feels well prepared for the next phase of his career.

“Programs such as Equity are integral, not only to the students, but to the members of our community who require diverse health care options. I want to make sure that other students, with stories and backgrounds similar to mine, get the access and mentorship they need to follow and achieve their goals.”

Delvin Akins at his White Coat Ceremony, 2015. Prior to being accepted into OHSU School of Medicine, Akins was an intern in the OHSU Equity Research Program, an eight-week internship program designed for undergraduate students from economically disadvantaged, first-generation or underrepresented minority groups. (Photo courtesy of Delvin Akins)