Via a mouse model, OHSU physician-scientists lead effort to hone a drug that inhibits cancer cells from spreading to other areas in the body
By Amanda Gibbs June 22, 2018 Portland, Oregon 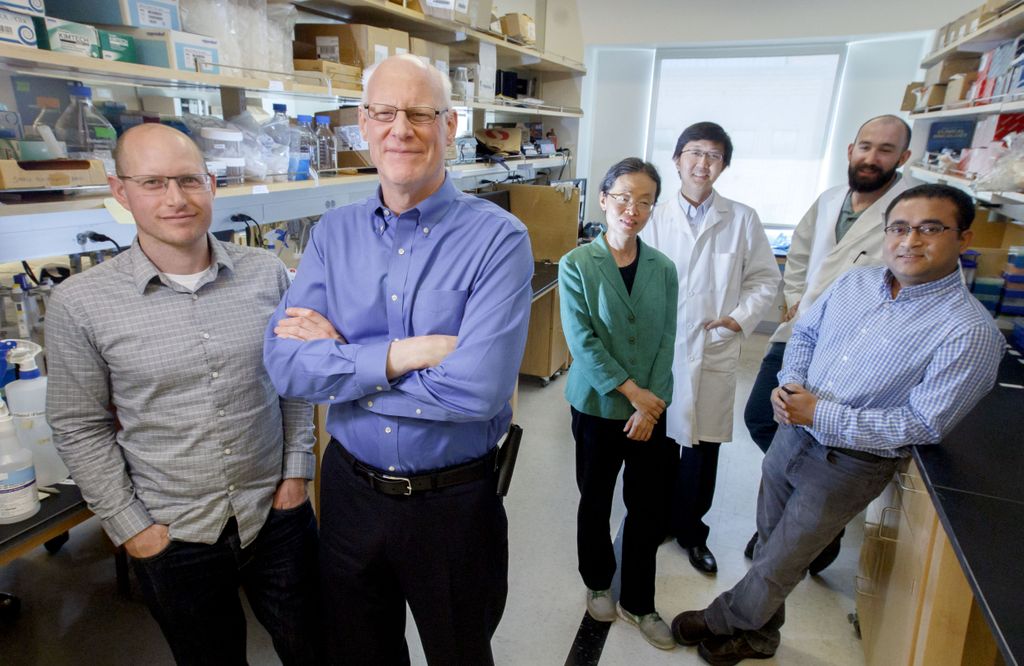 Fighting cancer means killing cancer cells. However, oncologists know that it’s also important to halt the movement of cancer cells before they spread throughout the body. New research, published today in the journal Nature Communications, shows that it may be possible to freeze cancer cells and kill them where they stand.

Raymond Bergan, M.D., Division Chief of Hematology and Medical Oncology and professor of medicine at OHSU, says that the majority of cancer treatment therapies today are directed toward killing cancer. To date, he says, no one has developed a therapy that can stop cancer cells from moving around the body.

“For the vast majority of cancer—breast, prostate, lung, colon, and others—if it is detected early when it is a little lump in that organ and it has not spread, you will live. And generally, if you find it late, after it has spread throughout your body, you will die,” says Bergan, also the associate director of medical oncology in the OHSU Knight Cancer Institute and director of the OHSU Bergan Basic Research Laboratory. “Movement is key: the difference is black and white, night and day. If cancer cells spread throughout your body, they will take your life. We can treat it, but it will take your life.”

For that reason, the study of cancer cell movement, or motility, has been the focus of his group’s research for several decades.

In 2011, Bergan and team took a novel approach to their research by working with chemists to jointly discover a drug that will inhibit the movement of cancer cells.

“We used chemistry to probe biology to give us a perfect drug that would only inhibit the movement of cancer cells and wouldn’t do anything else,” Bergan says. “That basic change in logic lead us to do everything we did.”

Ryan Gordon, Ph.D., research assistant professor in the OHSU School of Medicine and co-director of the Bergan lab, says drawing upon the strengths of this cross-functional group was key to the research’s success.

“As we identified areas we were lacking, we looked at new cutting-edge technologies, and if there was something that didn’t meet our needs, we developed new assays to address our needs,” he says.

The lab of Karl Scheidt, Ph.D., professor of chemistry and professor of pharmacology; director of the Center for Molecular Innovation and Drug Discovery; and executive director of the NewCures accelerator at Northwestern University, was responsible for the design and creation of new molecules which were then evaluated by Bergan’s team for their ability to inhibit cell motility. Using chemical synthesis approaches, Scheidt and team accessed new compounds that minimized motility in tumor cells, with few side effects and very low toxicity.

“We’ve taken a clue provided by nature and through the power of chemistry created an entirely new way to potentially control the spread of cancer,” Scheidt says. “It’s been a truly rewarding experience working together as a team toward ultimately helping cancer patients.”

Bergan notes the process for narrowing down the specific drug compound was a process of refinement.

“We started off with a chemical that stopped cells from moving, then we increasingly refined that chemical until it did a perfect job of stopping the cells with no side effects,” he says. “All drugs have side effects, so you look for the drug that is the most specific as possible. This drug does that.”

Bergan says the key to this drug was engaging the heat shock proteins—the “cleaners” of a cell. “The way the drug works is that it binds to these cleaner proteins to stop cell movement, but it has no other effect on those proteins.”

He says it is a very unusual, unique mechanism that “took us years to figure out.”

“Initially, nobody would fund us,” Bergan says. “We were looking into a completely different way of treating cancer.” 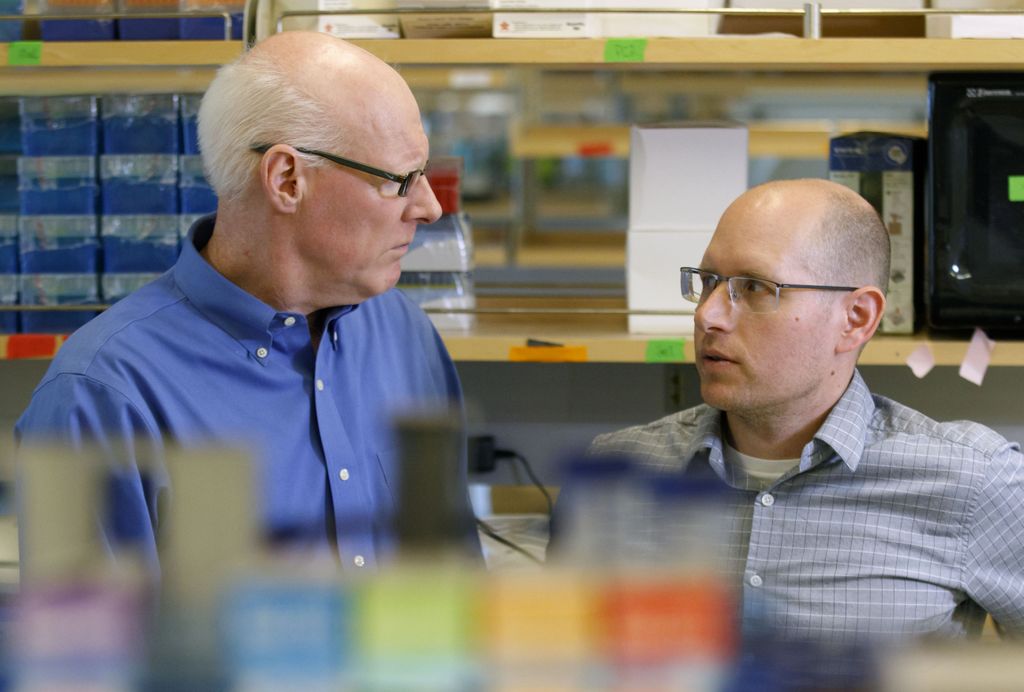 Raymond Bergan, M.D., (left) with Ryan Gordon, Ph.D., in the OHSU Bergan Basic Research Laboratory. “The eventual promise of this research is that we’re working toward developing a therapeutic that can help manage early stage disease, preventing patients from getting the more incurable later-stage disease,” says Gordon. (OHSU/Kristyna Wentz-Graff)

Next step: testing the drug in humans

Ultimately, Gordon says the goal of this research is to look for a new therapeutic to benefit humans.

“The eventual promise of this research is that we’re working toward developing a therapeutic that can help manage early stage disease, preventing patients from getting the more incurable later-stage disease,” he says.

He’s quick to note this work has not been tested in humans, and doing so will require both time and money. The team’s best estimate is that will take about two years and five million dollars of funding. They are currently raising money to do IND (investigational new drug) enabling studies, a requirement to conduct a clinical trial of an unapproved drug or an approved product for a new indication or in a new patient population.

In addition, Drs. Bergan and Scheidt have founded a company, Third Coast Therapeutics, aimed to bring this type of therapy to patients.

“Our eventual goal is to be able to say to a woman with breast cancer: here, take this pill and your cancer won’t spread throughout your body. The same thing for patients with prostate, lung, and colon cancer,” Bergan says. “This drug is highly effective against four cancer types (breast, colon, lung, prostate) in the in vitro model so far. Our goal is to move this forward as a therapy to test in humans.”

Bergan says his team feels lucky to have the opportunity to conduct this challenging research at the OHSU Knight Cancer Institute, an institute dedicated to novel approaches to detecting and treating cancer.

“What early detection is trying to do is detect an early, lethal lesion. Cancers are lethal because they move,” he says. “This drug is designed to stop that movement.”

Funding for this research was supported by the Department of Defense and the Veteran’s Administration.

In the interest of ensuring the integrity of our research and as part of our commitment to public transparency, OHSU actively regulates, tracks and manages relationships that our researchers may hold with entities outside of OHSU. In regards to this research, Dr. Bergan and other authors on this manuscript founded a company called Third Coast Therapeutics. Review details of OHSU's conflict of interest program to find out more about how OHSU manages these business relationships.

Raymond Bergan, M.D., (left) talks with Ryan Gordon, Ph.D., in the OHSU Bergan Basic Research Laboratory, May 23, 2018. A multidisciplinary team has discovered a drug compound that stops cancer cells from spreading throughout the body. (OHSU/Kristyna Wentz-Graff)

Ryan Gordon, Ph.D., research assistant professor in the OHSU School of Medicine and co-director of the Bergan lab. (OHSU/Kristyna Wentz-Graff)