OHSU is the only hospital in Oregon that repairs, replaces all heart valves without open-heart surgery
By Franny White March 25, 2019 Portland, Oregon 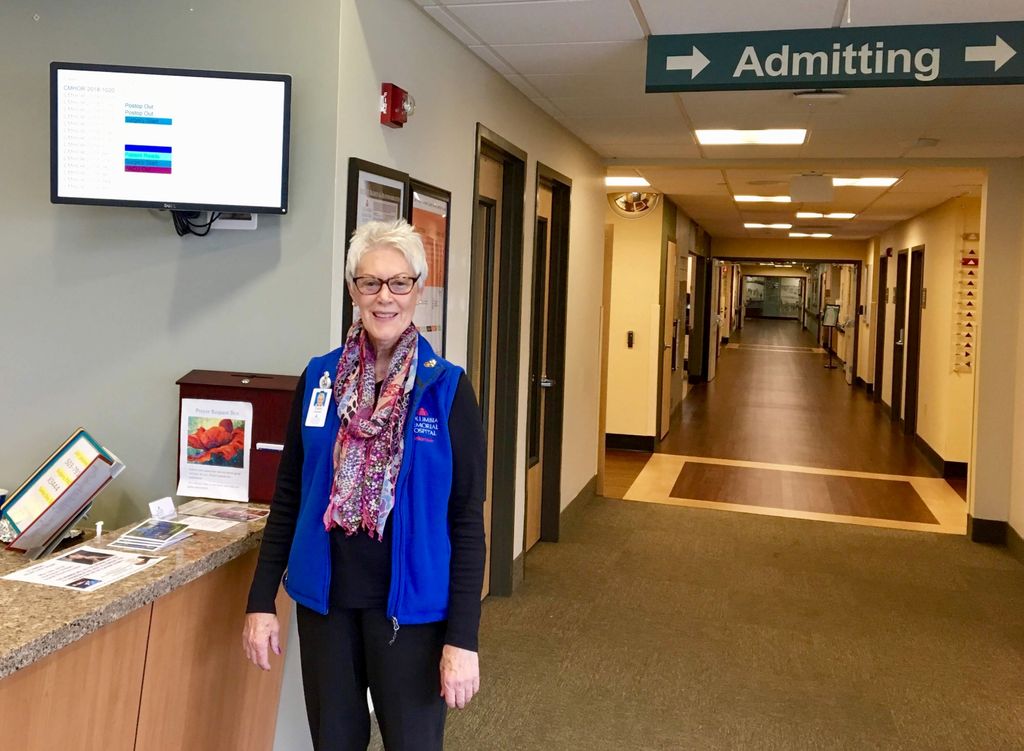 Radiation helped Theresa “Terri” Gibson to beat Hodgkin’s lymphoma when she was 19 and again when she was 29.

But the treatment brought other problems, including thyroid and breast cancers later in life, which she also beat. That same radiation also thickened her heart tissue, which made repairing two of her ailing heart valves through traditional open-heart surgery too risky.

A partnership between Columbia Memorial Hospital in Astoria and OHSU in Portland, however, enabled her two heart valves to be repaired through a less invasive and safe alternative.

The Jan. 16 surgery – which repaired her tricuspid and mitral heart valves with tiny instruments inserted through a catheter via a small incision near her groin – has given Gibson, 71, of Hammond, a new lease on life.

“It has improved my life 100 percent,” Gibson said. “I can walk and breathe again. Before the surgery, I couldn’t even climb stairs or walk across a parking lot without having to stop and catch my breath.”

OHSU is the only hospital in Oregon that repairs and replaces all four heart valves with a catheter, through both FDA-approved procedures and OHSU’s involvement in clinical trials.

“Open-heart surgery can be grueling and even dangerous for patients with more than one severe health condition,” said one of the physicians who led Gibson’s procedure, Firas Zahr, M.D., an assistant professor of medicine (cardiovascular medicine) in the OHSU School of Medicine and co-director the OHSU Knight Cardiovascular Institute’s Complex Heart Valve Program.

“Many older or frail patients are not good candidates for open-heart surgery,” Zahr continued. “But many of those same patients can go home the day after having a transcatheter heart valve procedure.”

Zahr performed Gibson’s surgery with Howard Song, M.D., Ph.D., a professor of surgery (cardiothoracic surgery) in the OHSU School of Medicine and the other co-director of the OHSU Complex Heart Valve Program, along with Scott Chadderdon, M.D., an assistant professor of medicine (cardiovascular medicine) in the OHSU School of Medicine who led the use of echocardiography essential for transcatheter heart valve surgery.

Gibson learned OHSU repairs and replaces heart valves through a catheter from her local cardiologist, Diana Rinkevich, M.D., medical director of the CMH/OHSU Cardiology Clinic and an associate professor of medicine (cardiovascular medicine) in the OHSU School of Medicine.

Gibson previously had open-heart surgery in 2010 to replace her aortic heart valve. She had to recuperate for four months afterward before she could return to work as a lab tech at Columbia Memorial, a position she retired from in 2013. But her Jan. 16 surgery at OHSU was an entirely different experience.

“I’m amazed,” Gibson said. “I’ve had a lot of surgeries, but this was just such an easy procedure for me. It’s like night and day.”

Gibson recently started cardio rehabilitation to build up her heart’s strength after several sedentary months before her most recent procedure. She looks forward to getting back into riding her bike along Astoria’s trails.

She has also returned to volunteering at Columbia Memorial, where she helps patients and families receiving care and is also president of the hospital auxiliary.

OHSU also was the first Oregon hospital to offer transcatheter mitral valve replacements through the Medtronic-led APOLLO clinical trial in 2018.