A new prescription for cancer: Exercise 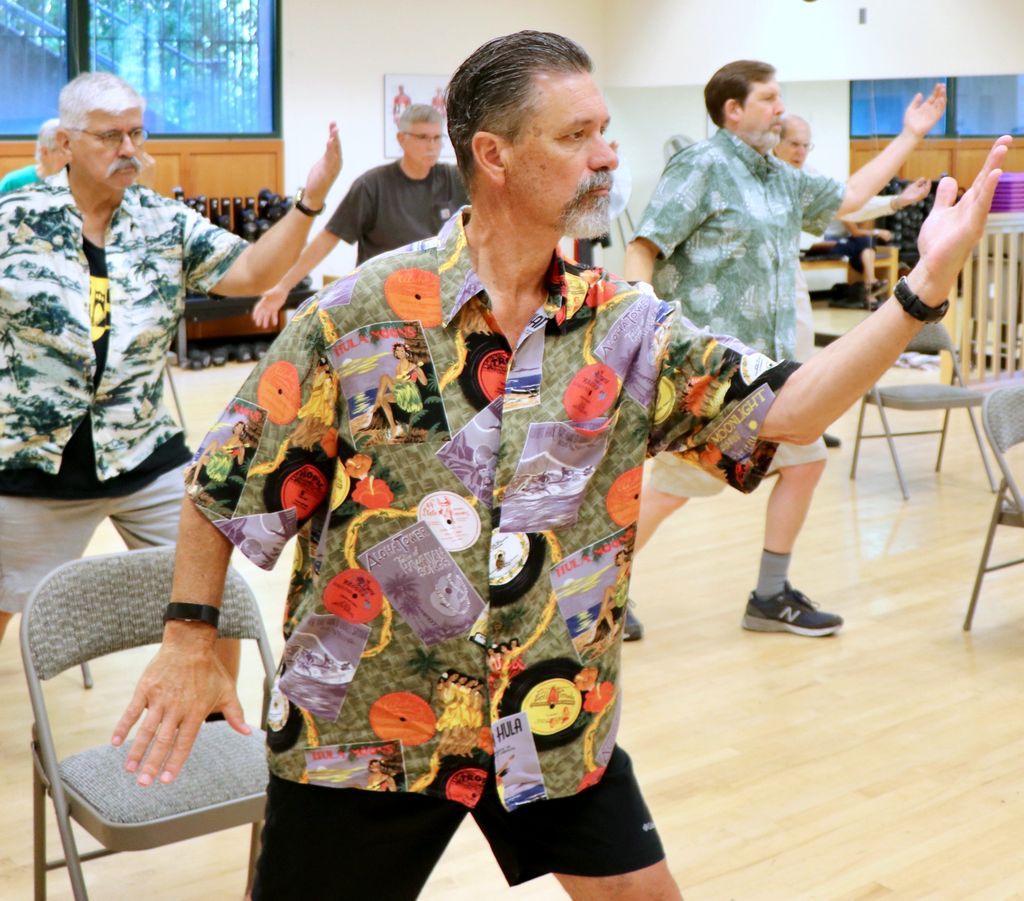 Trial participant Bill Westmoreland takes part in a class in July 2019 at OHSU. The class is part of a NIH-funded clinical trial testing two types of exercise--tai chi versus strength training--as a means to prevent falls and injuries in men who've received anti-androgen therapy for prostate cancer. (OHSU/Joe Rojas-Burke)

“Take it easy” and “don’t overexert yourself” were common refrains for people with cancer until research made clear that exercising is safe during and after treatment.

Now, drawing on the most current scientific evidence, experts have published detailed guidance for clinicians prescribing exercises that can improve daily functioning and quality of life, reduce symptoms such as cancer-related fatigue, and potentially help individuals live longer.

“Exercising has a role across the entire cancer continuum,” said Kerri Winters-Stone, Ph.D., FACSM, one of the authors of the new guidance and the comprehensive review supporting it. “We now have an obligation to start moving exercise into the standard of care for cancer patients.”

Winters-Stone is co-leader of the Knight Cancer Institute’s Cancer Prevention and Control Program and holds the Elnora E. Thompson Distinguished Professorship in the OHSU School of Nursing.

The new guidance was developed by the American College of Sports Medicine, which gathered experts from 17 organizations, including the American Cancer Society and the National Cancer Institute, to review scientific evidence and offer recommendations about the benefits of exercise for prevention, treatment, recovery and improved survival.

The work is a major overhaul of the groups’ previous recommendations published in 2010, when the authors said there was not enough evidence to make specific exercise prescriptions. Their advice was general and largely followed the physical activity guidelines for adults with chronic conditions. Survivors were urged to “avoid inactivity” and be as physically active as possible. But, this recommendation wasn’t actionable given cancer survivors are more inactive than people who haven’t had cancer.

Since then, researchers have amassed strong evidence to show how exercising during and after cancer treatment improves fatigue, anxiety, depression, physical function and quality of life. Significantly, contrary to widely held assumption, they also found that exercise does not exacerbate lymphedema, a painful swelling condition that can result from surgery for many types of cancer, including breast cancer. The new guidance is detailed enough to help fitness and health care providers to prescribe specific doses of aerobic and resistance training for individual patients.

For cancer prevention, the authors found enough evidence to say that exercise specifically lowers risk of seven common types of cancer: colon, breast, endometrial, kidney, bladder, esophagus and stomach. The new guidance recommends exercise as a means to help lengthen survival after a diagnosis of breast, colon and prostate cancer, a benefit found even if exercise is started after cancer treatment is complete.

Significant gaps remain, the researchers report. For example, they don’t yet know what type of training is best to help people made vulnerable to falls as a consequence of cancer therapy. In two recent studies, Winters-Stone and colleagues found that certain types of cancer treatments, including chemotherapy and anti-hormone (androgen) therapy, can increase the risk of falls as much as two-fold, even after treatment is over. Winters-Stone is leading a clinical trial, called GET FIT Prostate, that’s testing two types of exercise – tai chi versus strength training – as a means to prevent falls and injuries in men who’ve received anti-androgen therapy. Funded by the National Institutes of Health, it is the first head-to-head comparison of the two exercise modalities and their ability to protect prostate cancer survivors from falls, frailty and functional decline.

Currently there is not enough evidence of cost-effectiveness to convince third-party payers to reimburse for exercise programs designed for people with cancer, comparable to the cardiac rehab programs widely available for people with heart disease. 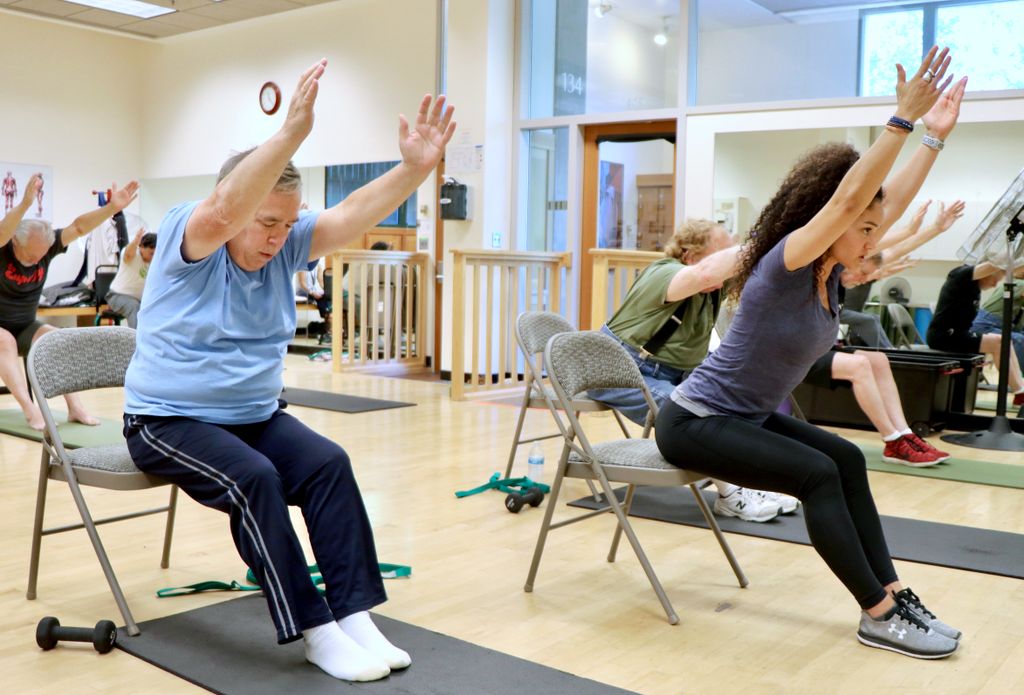 “The oncology community has been increasingly embracing the idea of encouraging patients to stay physically active. And that’s been a positive change, but not enough,” Winters-Stone said. “We need to build actual resources and programs so that when a savvy clinician writes a prescription for exercise, the patient has someplace to go.”

The developers of cardiac rehab were able to show that exercise could prevent second heart attacks and repeat hospitalizations in the following weeks or months. With cancer, Winters-Stone said you might have to follow patients for years to find out if exercise has delayed the return of cancer or extended survival.

There may be faster ways to show cost-effectiveness. One line of research is seeking to find out whether exercise can enable people to complete more cycles of cancer treatment by helping them withstand the toxicity. In the GET FIT Prostate study led by Winters-Stone, it will be possible to follow the cohort to learn whether training allows more men to stay on life-extending anti-androgen therapy.

Given the current evidence, Winters-Stone said health systems and cancer centers should not wait for third-party reimbursement to build capacity for providing exercise programs for cancer patients and survivors. A companion paper to the updated exercise guidelines provides a step-by-step guide for oncology providers on how to implement exercise guidance into the care of their patients.

“A hospital may not get direct reimbursement, but there are other ways to think about what that investment brings than an immediate return,” she said. “Part of providing health care for cancer patients is reducing the impact of toxic therapies and exercise does that. We also have a responsibility to help people get people back to a high quality of life and exercise can do that, too,” she said. “And in the long run, I think that making exercise part of the standard of care for people with cancer will also prove to make sense economically and socially.”

Kerri Winters-Stone, Ph.D., is co-director of the Community Partnership Program and co-leader of the Knight Cancer Institute’s Cancer Prevention and Control Program. (OHSU)

Brian Fawkes, trial participant, (left) is guided by trainer Kimi Daniel during a class in July 2019 at OHSU. The class is part of a NIH-funded clinical trial testing two types of exercise--tai chi versus strength training--as a means to prevent falls and injuries in men who've received anti-androgen therapy for prostate cancer. (OHSU/Joe Rojas-Burke)

Trial participant Bill Westmoreland takes part in a class in July 2019 at OHSU. The class is part of a NIH-funded clinical trial testing two types of exercise--tai chi versus strength training--as a means to prevent falls and injuries in men who've received anti-androgen therapy for prostate cancer. (OHSU/Joe Rojas-Burke)