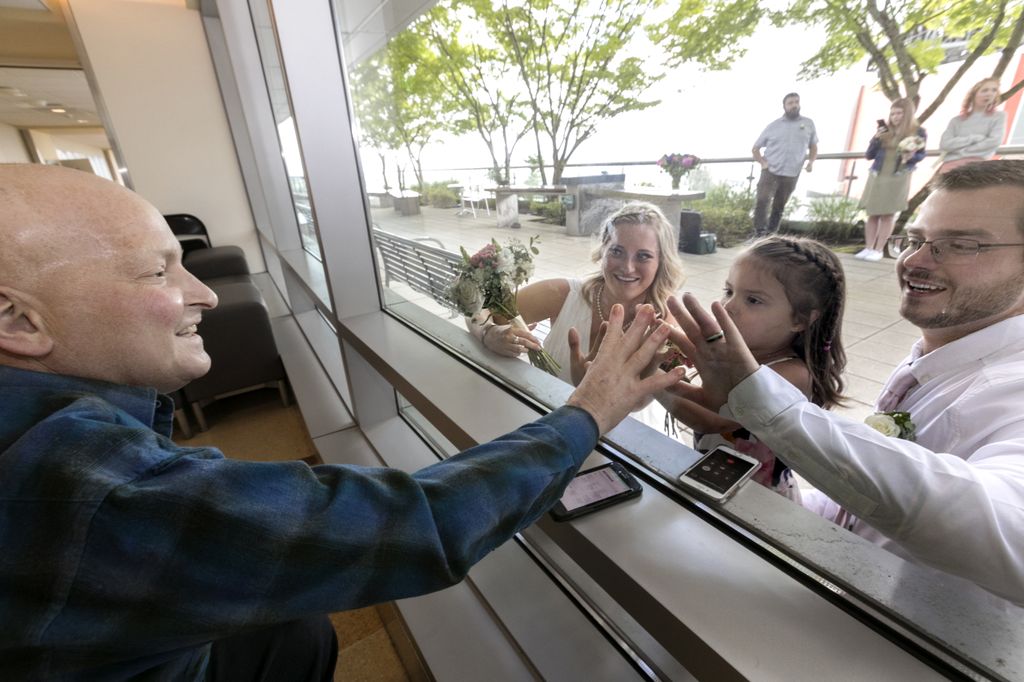 Phil Fagerstrom, left, momentarily removes his mask during family photos, and reaches out to his daughter-in-law Lillian, granddaughter Audriana, and son Torsten. The small wedding was held at OHSU where Phil is a patient and he was able to watch the nuptials through a hallway window. (OHSU/Kristyna Wentz-Graff)

A hospital terrace wasn’t exactly the venue Torsten and Lillian Gillaspey Fagerstrom had envisioned for their wedding. In fact, the Meridian, Idaho, couple weren’t planning on getting married for another year or so.

But in uncertain times, plans change. And what really mattered to Torsten was that his father, Phil Fagerstrom, was able to share this moment with them.

“I want my dad there. He’s a big part of my life and I don’t want him to miss out,” says Torsten Fagerstrom, 25. “So we decided, we’re going do it here and have him be involved.”

The elder Fagerstrom, from Juneau, Alaska, has been hospitalized at Oregon Health & Science University for the past three months — part of his battle with leukemia. After Phil’s health scare a few weeks ago, the young couple decided to move up the wedding date and bring it to him.

Wedding planning went into full swing. Phil’s brother became an officiant. The bride ordered a wedding dress. A photographer was booked. Phil’s wife, Kathryn, was busy making calls and arrangements. Family and friends from across the country were informed and invited to attend via Zoom.

Because of COVID-19, visitors are not allowed into the hospital. So arrangements were made for Phil to watch through a hallway window as his son was married on the terrace outside.

Two weeks later, the wedding day had arrived. Phil was quiet as he watched, listening to the brief ceremony on his cell phone. Throughout the event, his 4-year-old granddaughter kept looking back at him, showing off the flowers she carried as the flower girl. 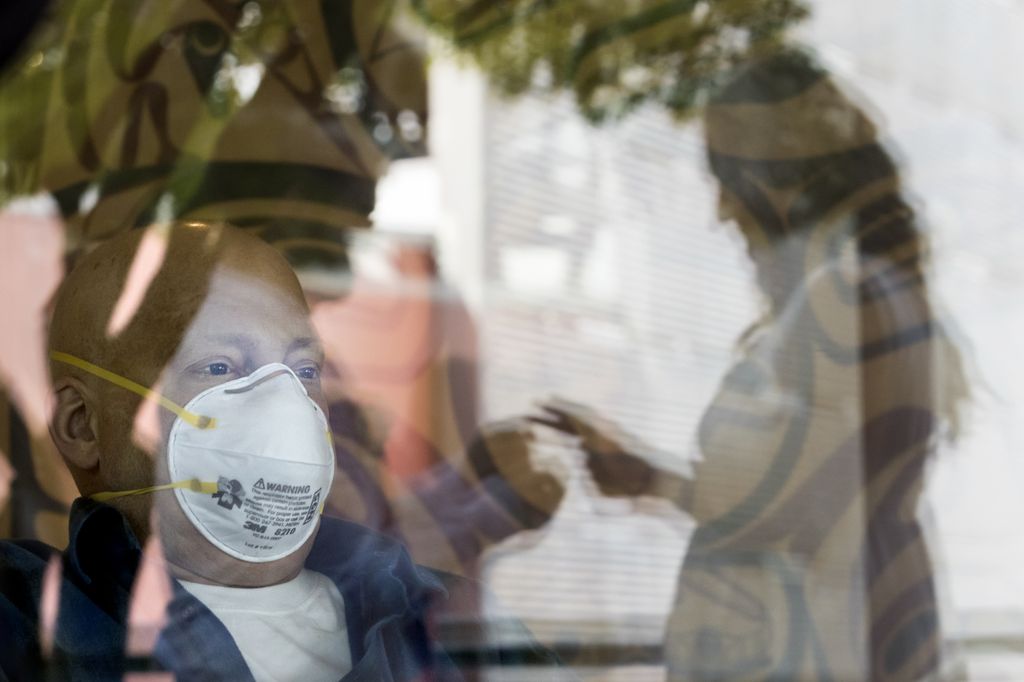 His eyes watered when his son and daughter-in-law exchanged vows and rings. And when the wedding was over, his family came to the glass to see him.

Phil removed his mask briefly, smiling as Torsten and Lillian pressed their hands to the window. Phil reached out to them, pressing his hand to his side of the glass. They smiled at one another, saying ‘I love you.’

Phil was quiet as he prepared to return to his hospital room. He isn’t sure what the future holds, but he was glad to have shared this moment.

“I got to see this,” he said, and then moved down the hall.

Family photos, taken after the wedding of Torsten and Lillian Fagerstrom, with Torsten's father Phil watching from inside OHSU, May 17, 2020. (OHSU/Kristyna Wentz-Graff)

Audriana Fagerstrom, 4, and her grandmother Kathryn Fagerstrom talk with grandfather and husband Phil Fagerstrom, at OHSU, May 17, 2020. Kathryn and Phil's son's marriage was held at the hospital so his father could attend. (OHSU/Kristyna Wentz-Graff)

Lillian and Torsten Fagerstrom during their wedding at OHSU, May 17, 2020. (OHSU/Kristyna Wentz-Graff)

Lillian and Torsten Fagerstrom during their wedding at OHSU, May 17, 2020. (OHSU/Kristyna Wentz-Graff)