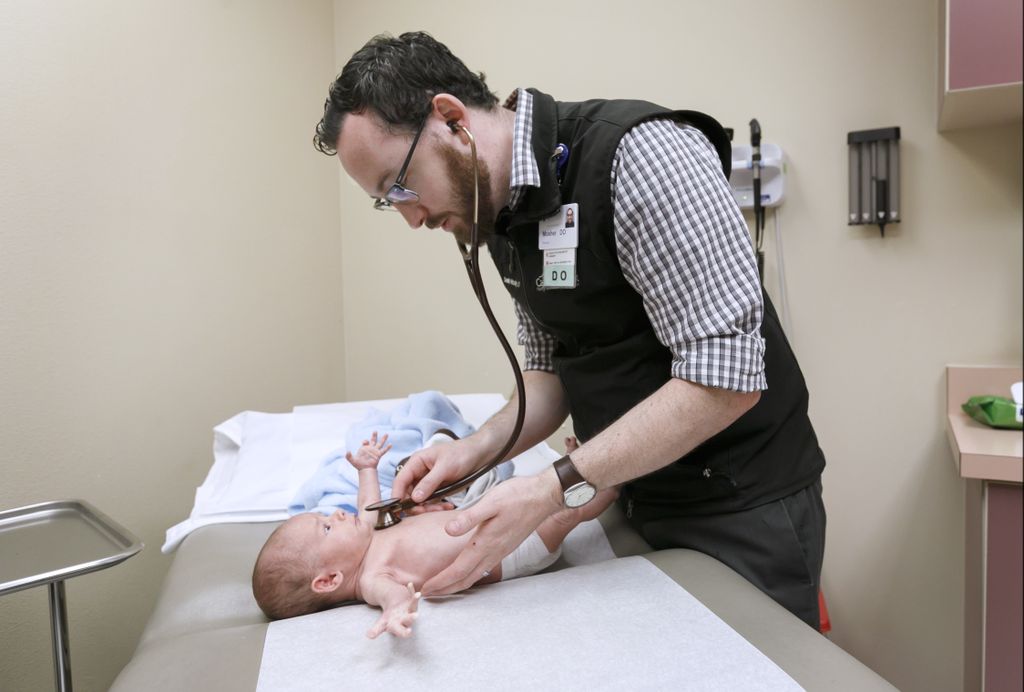 OHSU is partnering with other hospitals and health systems to increase the total number of medical residency slots in Oregon. In this 2019 photo, resident Dan Mosher, D.O. of OHSU’s Cascades East Family Medicine Residency program in Klamath Falls, examines a young patient.

To ensure Oregon will have the trained physicians it needs to meet the state’s health care needs, Oregon Health & Science University is using out-of-the-box approaches to expand graduate medical education throughout the state.

The state’s only academic health center aims to expand the number of medical residents – or recent med school graduates who receive advanced training in real-world health care settings under the supervision of seasoned physicians – by 100 slots within the next 10 years. Beyond growing OHSU’s residency programs, the OHSU School of Medicine’s new Graduate Medical Education Statewide office is collaborating with other institutions to help them start their own programs.

“Bringing more medical residents to Oregon is key to bringing more physicians to Oregon,” said Jim Anderson, M.D., a professor of diagnostic radiology in the OHSU School of Medicine who also directs the school’s Graduate Medical Education Statewide initiative. “Studies have shown that physicians are more likely to set roots in the same states and cities where they do their residencies. As a statewide institution, OHSU seeks to bring more doctors to Oregon as a whole, regardless of whether they end up working for OHSU.”

The initiative’s early successes include new residency programs coming to OHSU Health Hillsboro Medical Center, formerly known as Tuality Healthcare. Two of those programs, which will train recent medical school graduates in family medicine and internal medicine for three years, already have received approval by national accreditors. And Hillsboro has proposed a third program that would offer one year of transitional training for new physicians who specialize in certain fields such as radiology, pathology, dermatology and anesthesiology so they can later join more specialized residency programs elsewhere.

Combined, the three programs could bring as many as 60 medical residents to Hillsboro once they are fully operational around 2024. The family medicine and internal medicine programs could welcome their first residents as early as July 2021, and the transitional program could receive residents starting in July 2022.

“We're tremendously excited to launch residency programs at OHSU Health Hillsboro Medical Center and to welcome residents who are committed advocates to those in need, intellectually curious and eager to bring new energy and ideas in the provision of exceptional care,” Brian C. Ricci, M.D., who leads the Hillsboro internal medicine residency program and is also an assistant professor of medicine (internal medicine) in the OHSU School of Medicine. “Residents will be embedded within our community – in our primary care clinics, through the ¡Salud! health outreach program for seasonal winery workers, with local health care partners – and will hopefully remain here to serve our community for years to come.”

Ricci is working alongside Kay Nordling, M.D., who leads the Hillsboro family medicine residency program and is also an assistant professor of medicine (family medicine) in the OHSU School of Medicine, to bring both new programs to fruition.

Anderson also meets with other health care systems throughout the state to provide advice and guidance on how they might be able to start, grow or advance their own residency programs.

“We’re dispelling the myth that health systems have to compete against each other for medical residents,” Anderson said. “Oregon systems are coming together to help the state as a whole.”

Beyond building new programs, OHSU also is looking carefully at its own residency programs in the hopes of better serving the state’s rural and underserved communities. Some hospital-based programs across the OHSU Health system may add rural rotations for their residents, for example.

OHSU also is partnered with University of California, Davis, on a $1.8-million, American Medical Association-funded project to bring hundreds of medical students and residents to train under faculty and community physicians in rural and underserved communities throughout Oregon and Northern California. Some of that project’s residents may end up working at Hillsboro Medical Center.

*Above numbers are for residents only, and do not include fellows, who receive specialized post-residency training.

Shian Varnadore (left) and her son Hunter Schilling of Sprague Lake meet with Dan Mosher, D.O., at the OHSU-Cascades East Family Medicine Center, June 3, 2019 in Klamath Falls. Mosher is a resident at Cascades East, a collaboration between OHSU and Sky Lakes Medical Center, operating since 1994, with an aim to improve health access in rural Oregon. (OHSU/Kristyna Wentz-Graff)