After about two months in the hospital, Portland man starts physical therapy and new road to recovery
By Franny White March 12, 2021 Portland, OR 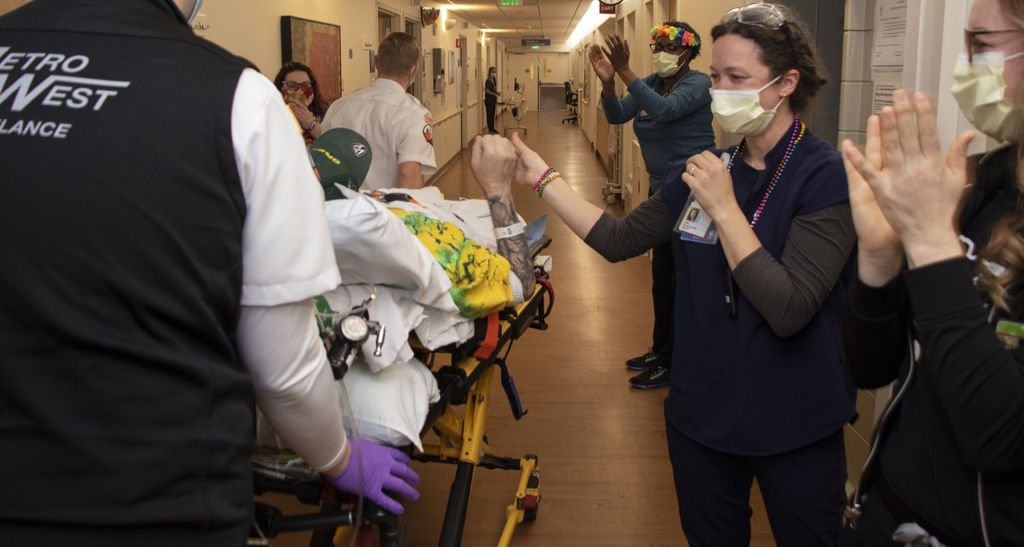 Retired teacher Rick Barde was discharged from Oregon Health & Science University March 12, 2021, to the fanfare of dozens of staff who have helped him overcome COVID-19 during the past two months. (OHSU/Josh Andersen)

After nearly two months of hospitalization, a recently retired teacher is kicking COVID-19 to the curb by starting a physical rehabilitation program to build up his strength after falling gravely ill in January.

Rick Barde, 60, of Portland, left Oregon Health & Science University this morning. He credited the support he and his wife, Juli Barde, 65, have received from the community associated with southwest Portland’s Bridlemile Elementary School, from which he retired in September after a 30-year teaching career.

“I’m overwhelmed and beyond grateful,” Rick said during an emotional video call two weeks ago while his wife sat at his hospital bed. “This has helped me learn how supported I am. There are people who remember me after all these years of teaching. Maybe I made a difference more than I thought I did.”

Juli also became infected with the novel coronavirus, but didn’t need to be hospitalized. The couple married in a courthouse ceremony shortly before a global pandemic was declared in March 2020. 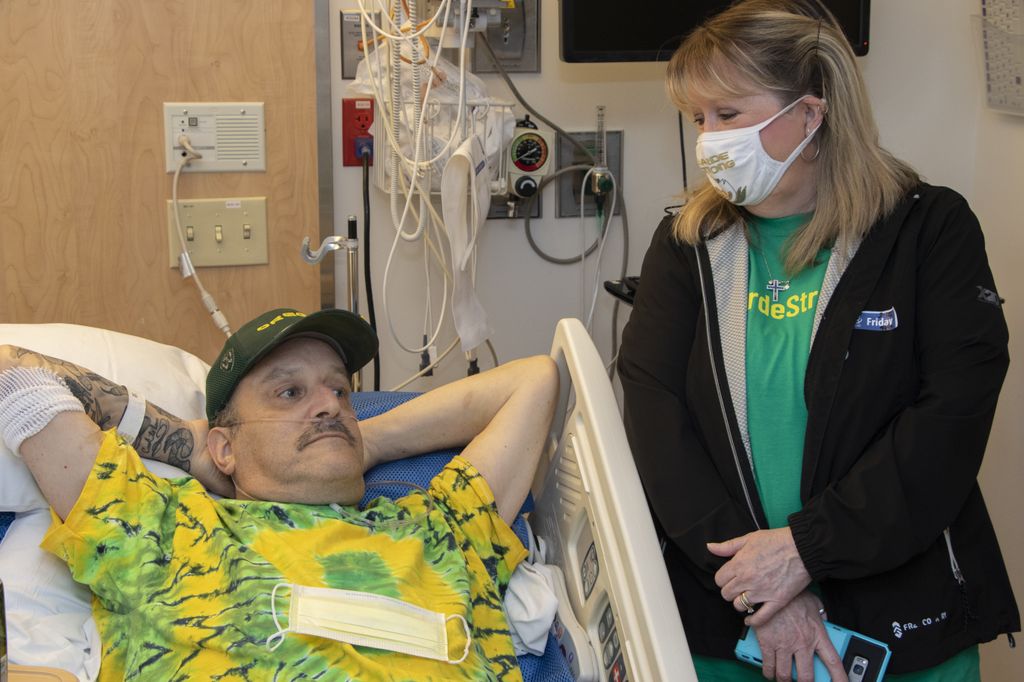 Recovering COVID-19 patient Rick Barde and his wife, Juli Barde, spoke with Oregon Health & Science University staff who stopped by to wish him well before he was discharged March 12, 2021, after nearly two months of hospitalization. (OHSU/Josh Andersen)

They’ve both received support from countless directions. The night he was initially admitted to Legacy Meridian Park Medical Center in Tualatin, concerned text messages were flying between Bridlemile parents. And when he was transferred to OHSU about a week later on Jan. 23, two Bridlemile parents were there to greet him. The children of his OHSU admitting physician, Matthew Drake, M.D., had gone to Bridlemile, while the children of OHSU hospitalist Stephanie Halvorson, M.D., had Rick as their third-grade teacher.

“To be honest, I was frightened for him,” recalled Halvorson, who treated Rick after he finished two weeks on advanced life support equipment called Extracorporeal Membrane Oxygenation, or ECMO, at OHSU. “He was really sick when he came here. But he’s progressed so far, and I’m very hopeful.”

During his stay at OHSU, Rick’s hospital room was decorated with hand-drawn posters from students. He received more than 200 cards from supporters, including from a former student who now lives in Japan. Members of the school community brought Juli warm food for sustenance, they are raising funds to help cover his health expenses, and they have created lawn signs with the tagline “Barde Strong,” among many other thoughtful actions.

“Mr. Barde was the school’s go-to guy,” said Bridlemile PTA President Jen Moylan, who said Rick helped her son grow academically as well as overcome shyness. “This man goes above and beyond like truly no other teacher I’ve ever encountered.”

Moylan said he was both a playful teacher who played pranks like placing students’ shoes in a freezer and a responsible adult who naturally commanded respect and admiration from his pupils. 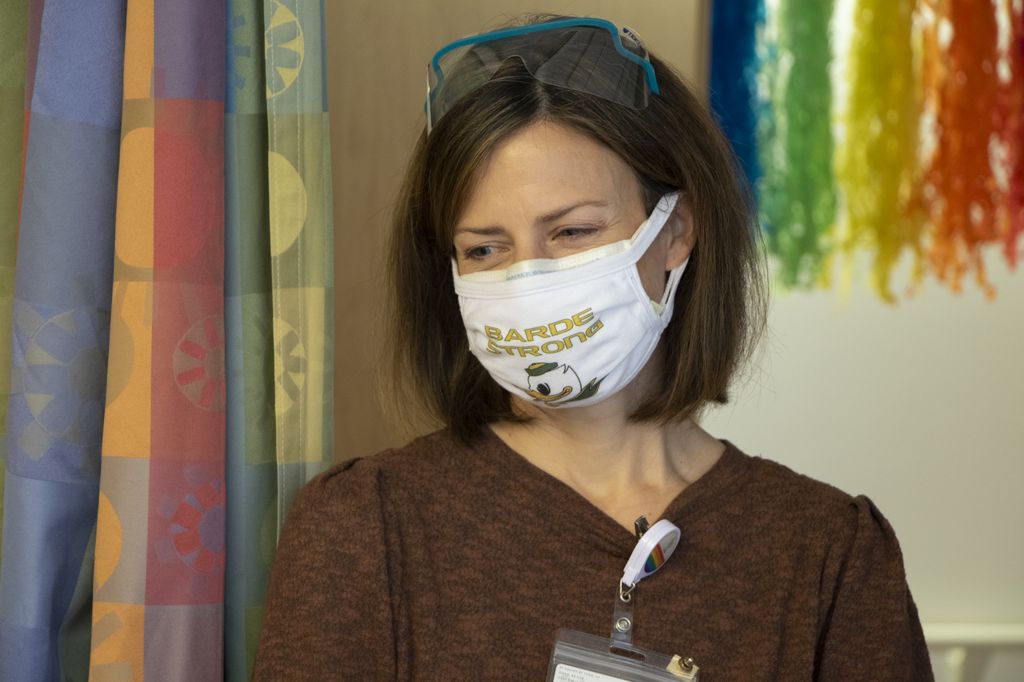 “It’s been a rough year,” said Moylan, who is also a nurse at another Portland hospital’s emergency department. “But Mr. Barde getting COVID made it a bit more personal. He is basically our family, and him becoming so sick made it a little harder for sure.”

ECMO was Rick’s only option in late January because COVID had ravaged his lungs so badly that not even a ventilator on full oxygen support was enough, said OHSU ECMO program director Bishoy Zakhary, M.D., who was part of the traveling team that first connected Rick to the complex equipment at Meridian Park. ECMO is an external heart-lung machine that adds oxygen into a patient’s blood so their lungs can rest and heal.

“When I was at the other hospital to initiate ECMO, I was already hearing about how he was a teacher, how everyone loves him, and he had just gotten married, too,” Zakhary said. “This was a tough case. To see his dramatic recovery is incredibly satisfying. We deal with the sickest patients every day and cases like this give us hope.”

Rick said he hoped others could learn from his experience.

“COVID is nasty and it’s very real,” he said. “I feel very fortunate that my wife called an ambulance when she did and that there was an ECMO machine available when I needed one. Please wear those masks and wash those hands. We were very safe, and I still got it.”

Rick said he looked forward to hugging his 91-year-old father. And, after expressing appreciation of the “excellent care” he received at OHSU, he also said he planned to volunteer so he could help other OHSU patients who are seriously ill.

COVID patient Rick Bardes hospital room wall was covered with hand-drawn posters and photos from students, families and colleagues from Bridlemile Elementary, from which he retired in September 2020. (OHSU/Josh Andersen)

Recovering COVID-19 patient Rick Barde and his wife, Juli Barde, spoke with Oregon Health & Science University staff who stopped by to wish him well before he was discharged March 12, 2021, after nearly two months of hospitalization. (OHSU/Josh Andersen)

Rick Barde was visited by his dog, Kugel, at Oregon Health & Science University. Barde was hospitalized for nearly two months, two weeks of which required advanced life support, with a severe case of COVID-19 in early 2021. (Courtesy of Juli Barde)

The Bridlemile Elementary School community created lawn signs with the tagline Barde Strong to show support for Rick Barde, who became gravely ill with the coronavirus in January 2021 after retiring from a 30-year teaching career in September 2020. (Courtesy of Jen Moylan)

Retired teacher Rick Barde, of Portland, was discharged from Oregon Health & Science University March 12, 2021, to the fanfare of dozens of staff who have helped him overcome COVID-19 during the past two months. (OHSU/Josh Andersen)

Retired teacher Rick Barde was discharged from Oregon Health & Science University March 12, 2021, to the fanfare of dozens of staff who have helped him overcome COVID-19 during the past two months. (OHSU/Josh Andersen)