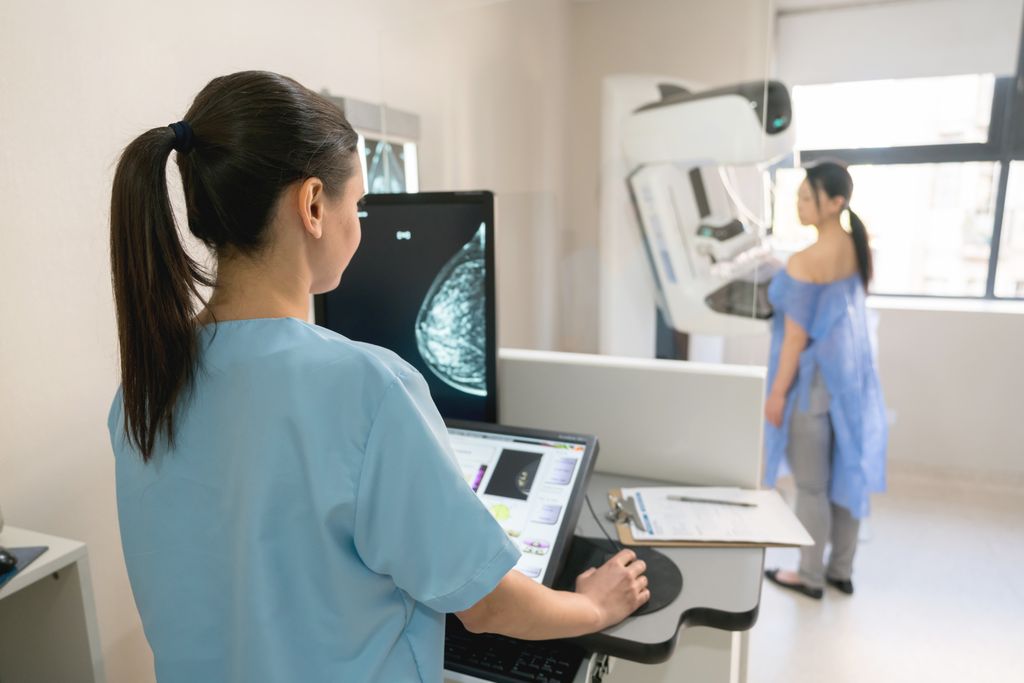 A nurse takes a mammogram exam of a female patient at the hospital. Breast cancer screenings are important to help detect cancers early. (Getty Images)

The hotly debated topic of overdiagnosis in cancer screening is complex.  It’s so complex that cancer biostatistician Ruth Etzioni, Ph.D., distinguished scientist at the Cancer Early Detection Advanced Research (CEDAR) Center at the OHSU Knight Cancer Institute, has been thinking about it for the past 10 years.

The concept of overdiagnosis is hard to grasp, she says, because cancer screening is an important way to detect cancers early — before they grow or spread to other areas of the body. The complication is that not all screen-detected cancers would have gone on to become problematic or cause harm to someone, a term called “overdiagnosis.”

“All of the press around high numbers of breast cancer overdiagnosis caused people to rethink the value of breast cancer screening,” says Etzioni, also a professor and endowed chair at the Fred Hutchinson Cancer Research Center. “The implication — that breast cancer screening, meant to protect women, could actually be harmful — has caused endless confusion for patients and providers, and prompted countless debates among researchers and policymakers.”

The widely cited research regarding breast cancer overdiagnosis rates stems from a 2012 New England Journal of Medicine paper that suggests approximately 31% of all breast cancer cases were overdiagnoses, which translates to an even higher frequency of overdiagnosis among screen-detected cancers. To better understand actual rates of overdiagnosis, Etzioni teamed up with collaborators across the country to take a closer look at data.

Their findings — that among women screened every other year between ages 50 and 74, approximately 1 in 7 screen-detected tumors are over-diagnosed — were recently published in the Annals of Internal Medicine. The average rate that the authors identified, roughly 15% of overdiagnosis, challenges the previous dogma.

Taking a closer look at the data

Marc Ryser, Ph.D., an assistant professor at Duke University, and Jane Lange, Ph.D., a CEDAR staff scientist, led the effort to mine data from the national Breast Cancer Surveillance Consortium (BCSC), including data from 35,986 women for this study.

The team used three key criteria for compiling their results from the consortium data: They studied women at “average risk,” a population between the ages of 50 – 74, who received their first screening at a BCSC facility. From their screening and diagnosis histories, they estimated the fraction of breast tumors that would never have progressed to cause symptoms and the average latency for the rest. By combining these estimates with life table data on the risk of other causes of death by age, they predicted how many women in the study’s age group detected by mammography in a biennial screening program would be over-diagnosed.

“These data are highly valuable because reliably learning about overdiagnosis while allowing that some breast cancers may not progress to cause symptoms requires detailed information on screening and diagnosis patterns for a large number of women,” says Etzioni.

“I want people to know that while we want everything to be simple, you cannot make something complex simple. We believe this dataset provides the most robust understanding we’ve had to date.”

Ryser was first author on the research study. He says that like anything else, mammography has benefits and harms.

“People love to think about a medical test as good or bad; but as with any other screening test, mammography screening comes with both benefits and harms,” he says. “Women, physicians, policymakers need to weigh the benefits and harms against each other. For the past 10 years, the debate about overdiagnosis in the U.S. has been haunted by uncertainty about its true frequency.”

Etzioni and team hope providing more nuanced, refined information will be helpful for people deciding whether to get screened for breast cancer.

“Everyone is trying to think about the harms and benefits of screening,” she says. “While our results confirm that breast cancer overdiagnosis is real, they also reassure that it is not as alarmingly frequent as the most prominent studies have suggested.”

Funding for the study was provided by a grant from the National Cancer Institute (R01 CA192402), a branch of the National Institutes of Health.

A nurse takes a mammogram exam of a female patient at the hospital. Breast cancer screenings are important to help detect cancers early. (Getty Images)

A better roadmap for beating a deadly leukemia